A very, very old and possibly senile man lies in hospital in 2092 and gradually recalls key fragments of his life in a jumble of flashbacks, flash forwards, near-death experiences and fantasy in Belgian filmmaker Jaco Van Dormael's Mr. Nobody, an ambitious, if uneven, experimental sci-fi romance that is less a thought-provoker than a dazzling juggling act.

To his credit, Van Dormael holds this fractured fairy tale together by giving it an emotional core and delivers two hours of time travel with a playful spirit and at a mostly hyperkinetic pace, sprinkling it with amusing side journeys and sometimes letting a scene unfold at a more natural tempo. It may help some viewers to know about classic behavioural experiments with birds, chaos theory or string theory as this info is tossed into the mix to remind us that the filmmaker is exploring serious ideas here. But perhaps the best way to take in this film is to let is wash over you until some of the pieces start fitting together. Or not.

Many notions and themes (childhood, memory, destiny) in Mr. Nobody, which screened at last year's Toronto International Film Festival, were explored in Van Dormael's 1991 Cannes-prize-winner Toto le héros . But viewers will likely be reminded of more linear commercial fare such as Sliding Doors or Run Lola Run, in which we see chance and choice create parallel or alternative outcomes for the character.

The old man, played by Jared Leto in heavy Little Big Man makeup, is the last dying person, since everyone else in the future is "quasi-immortal" thanks to triumphs in stem-cell research. A psychiatrist tries to unlock his mind with hypnosis, while a journalist tries to pry out his life story for the record but is left, à la the reporter in Citizen Kane, with more questions than answers about who this man really was.

We learn our protagonist's name is Nemo (Latin for "no one"), a sly reference to Jules Verne's underwater captain considering this Nemo can't swim, an important factor in several path-altering decisions. The emotional crux of the film is a brutal scene in which nine-year-old Nemo (Thomas Byrne), whose parents are divorcing, stands on a train platform and is asked to choose whether to leave with his mother (Natasha Little) or stay with his father (Rhys Ifans). We see three versions of him as a teen (a fine performance by Toby Regbo) and as a 34-year-old (Leto) which result from him taking both tracks, so to speak, of that childhood decision.

While these "strands" of Nemo aren't presented in parallel narratives, they are all anchored in his teenage pursuit of and eventual relationships with three different women: the passion of his life Anna (Juno Temple shines as the teen version), the woman he nurtures Elise (Sarah Polley gives a harrowing woman-on-the-verge performance as a seriously depressed mother) and Jeanne (Linh Dan Pham), with whom he leads a programmed life of career success and domestic ennui.

Pushing the film further into the stratosphere is another storyline (a sci-fi novel teenage Nemo hammers away at) in which adult Nemo emerges from artificial hibernation in an enormous space vessel arriving at a colony on Mars.

While Mr. Nobody contains some truly moving scenes, it eventually starts to try your concentration when you suspect all the space/time continuum shuffling may never become more than the sum of its parts.

A period piece that heaves and creaks with false passion
July 16, 2010 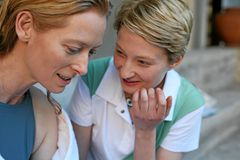