Do I have to be a fanboy (fangirl? fanwoman?) now? Scrolling through the breathless coverage of Comic-Con International, which concluded in San Diego this past Sunday – the annual four-day bacchanalia brings together 130,000 genre-loving fans and the movie studios, TV networks, publishing companies and toy manufacturers who spend millions to wow them – makes me think it's inevitable.

From exceedingly humble beginnings – at the first Comic-Con in 1970, 300 fans mingled for three days in a hotel basement – the convention has grown algebraically in size and stature. The New York Times estimates the non-profit that runs it has net assets of about $20-million. It routinely sells out, and generates so much mojo in San Diego that mayor Kevin Faulconer personally helped negotiate the renewal contract for the convention centre (at a steep discount). It's spawned countless imitators, including Fan Expo Canada, which will be held in Toronto from Sept. 3 to 6 (special guests include The Walking Dead's Norman Reedus, horrormeister George Romero and, fascinatingly, boxer Mike Tyson, who I guess is a special effect all by himself).

It may seem easy to dismiss Comic-Con as a compendium of oddities. Fans dressed in costumes. The special-guest list, thick with illustrators and graphic novelists, was proudly, unrelievedly niche. Conventioneers lined up to have their pictures taken with giant statues from the upcoming film Warcraft, tattooed models from the TV series Blindspot and sexy female-doll versions of horror villain Freddy Krueger. There was a puppy-petting park sponsored by The Peanuts Movie, a Porta-Potty advertising the film Insurgent and a mob carrying pro-Satan placards put together by the A&E series Damien.

But the sponsors – a long list, including studios, networks, Amazon Prime, DC Entertainment, Marvel, Nintendo and Penguin/Random House – who collectively pay about $4.6-million to rent booths, see only gold. To them, a thumbs-up from the Comic-Con crowd will almost certainly translate to boffo box office or TV ratings. According to ListenFirst Media, which aggregates data from social-media activity, the trailer for Batman v. Superman: Dawn of Justice generated nearly 19 million views on YouTube after unspooling at Comic-Con. Also whipping up interest was the trailer for the sixth season of The Walking Dead, a behind-the-scenes reel for Star Wars: Episode VII-The Force Awakens and a trailer for The Hunger Games: Mockingjay Part 2, the last instalment in the multibillion-dollar franchise.

Nowhere do cheers and jeers co-exist more. The splashiest presentations take place in Hall H, which boasts 6,500 seats and wrap-around screens that cost about $600,000 per hour to use. For every Deadpool – starring Ryan Reynolds as a wise-cracking mercenary – that sets Hall H on fire, there's a Fantastic Four that leaves viewers yawning and the studio scrambling to do damage control.

But the cheer/jeer thing isn't the only contradiction at Comic-Con. The presentation of Star Wars: The Force Awakens offered several others. Some fans lined up for two days to get in. (Director/co-writer J.J. Abrams bought them donuts.) The studio, Disney, brought in the stars (including originals Harrison Ford, Carrie Fisher and Mark Hamill), doled out Hasbro lightsabers (fans got to choose among blue, red or green), staged a free concert of John Williams' scores (Ford showed up, jokingly using his lightsaber as a cane), and capped it off with a massive fireworks display timed to the music. They spent millions of dollars to, as io9.com writer Germain Lussier put it, "create an experience people …will forever associate with the movie."

What fanpeople seem to forget, however, is that Disney did all that to sell them something. They wowed conventioneers so that they would go forth and generate free publicity, and then give them billions at the box office. In other words, fans lined up for two days to see a commercial – a splashy commercial, but a commercial nonetheless. "You're more than fans, you're family," Hamill told the crowd. Which would only be true if kids paid $12 to watch their parents for two hours on a Saturday night. Although the denizens of Comic-Con know every sales trick in the book, and judge them, they fall for them anyway.

Then there's the contradiction of illusion/authenticity. The Star Wars sizzle reel begins with slates being clapped in front of iconic sets, and then shows us bits of carpentry, green screen effects and scale models. It takes viewers behind the scenes just enough to show us how the tricks work. Then it cuts in glimpses of the finished film, to remind us of the magic we'll be paying for.

Comic-Conners don't see a conflict between authenticity and commerce, though; perhaps that's why they're the future. They embody this current moment in entertainment consumption, in which a fan can know every budget figure, and be privy to every F/X trick, and yet still be wowed. They write sentences on social media such as, "They also reverse-engineered the VFX to accommodate, for example, 2D forced perspective backings rather than relying on CG set extensions," and they squeal when a guy in a rubber suit walks on stage.

In the Star Wars footage, much is made of the fact that the film keeps one foot in the pre-digital world. "Everything's changed but nothing has changed," says Hamill. "That's the way you want it to be."

That's the way you want it to be. The filmmakers know what we want because they've done sophisticated research, and we've given them info for free, via social media. Why wouldn't they keep creating new genre stuff, and updating old stuff? Why shouldn't they do everything they can to turn us all into fanpeople?

As Fisher recalled on stage, while they were shooting the sequel to the first Star Wars, everyone knew they were making a guaranteed hit, and that was a weird feeling. It's the norm now, and Comic-Con has helped make that happen – it's become a four-day self-fulfilling prophesy.

The presentations for the film Suicide Squad (supervillains undertake black-ops missions) and the Starz zombie series Ash vs. Evil Dead made Hall H go nuts. Which tells the studio/network that they have winners on their hands. Which means they'll throw more marketing dollars at them, gross more money and make more movies/series like them. Which means we're going to be fanpeople for the foreseeable future. (Can someone please create Drama-Con, and trot out the likes of Kate Winslet, Julianne Moore and Benedict Cumberbatch, and hand out hankies instead of lightsabers? Oops, never mind, those three are in franchises, too.)

In a teaser trailer for Star Wars: The Force Awakens, Hamill intones, "You have that power, too." He's addressing someone with the Force, but it's clear that Comic-Conners believe he's also referring to them. They feel they have that power. Since the studios are twisting themselves like stuntmen on wires to create that illusion, in a weird way it's true. 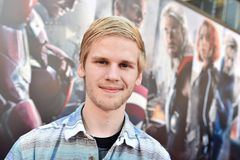