In silence, with my eyes closed, I spent five minutes drinking a glass of water. It was "a ritualization of everyday life" administered to me by Marina Abramovic to illustrate the methods behind her art.

The Yugoslavia-born, New York-based Abramovic, is at 65, one of the world's best-known performance artists. In her works, she has rendered herself unconscious, whipped and poisoned herself and stood motionless for six hours while audience members were invited to use any of 75 display objects upon her – including knives and chains.

She's been creating work for 40 years, but mainstream public attention has come to her only recently, largely because of a headline-grabbing 2010 retrospective at New York's Museum of Modern Art, titled The Artist is Present. For the occasion, she performed every day over three months, sitting silent and still – "like mountain," as she puts it – staring into the eyes of any audience member who chose to engage with her. The show, a milestone in the field of performance art, also included another controversial piece in which museum-goers had to squeeze between two naked performers standing facing each other in a doorway.

During the year surrounding the exhibition, filmmaker Matthew Akers extensively documented the artist's rigorous training of the performers, her personal life and the feats of discipline required for her to endure her work for his feature-length documentary Marina Abramovic: The Artist is Present. It has its Canadian premiere Wednesday at Toronto's TIFF Bell Lightbox on the opening night of the Canadian Art Reel Artists Film Festival. The artist will be present.

Before her Toronto visit, Abramovic spoke to (and experimented upon) me in her sunlit, spare loft in Manhattan. Naturally, her gaze was unflinching.

Y ou've become one of the best-known performance artists in world. Your show at MoMA had fans waiting hours in line. How do you feel about this new attention to performance art?

The last 40 years – my entire artistic career – I've tried to make performance a mainstream form of art. It's always been alternative. Museums invited you to perform at the opening gala, as a part of the entertainment. That's really wrong: Performance is serious business. It's not at all entertaining. It takes every single molecule of your being to do it. I really tried to demonstrate this in The Artist is Present and especially in the HBO film [ Marina Abramovic: The Artist is Present]/i>. We premiered it in Berlin, and it made Germans cry. To make German men cry is not an easy task.

The film gives an intimate look into your life. Did you feel that the film was part of the performance at MoMA?

I did something that was very hard to do, which was to give the key of my apartment to the filmmaker and give him entire control. Six in the morning he comes in, and I wake up with a camera in my face. For one year, I was hard-wired. But it all had a purpose: It was important to be able to show everything to a large audience who doesn't know what performance means. I hope it will give popularity to performance and to give a space for young artists to continue after me.

Would you like performance art to be viewed on an equal level to, say, painting?

This is why I'm making my own institute for performance art. It will be in Hudson, N.Y, a very big theatre which I bought four years ago. I just signed the contracts. It will be for long-durational performance work. Every kind of performance art: video, theatre, even opera, music – but everything has to be a minimum of six hours.

One very important aspect of the institute will be the school for the audience. How do you watch long performance art? There are many things they have to understand about concentration and contemplation. How do you see something when nothing is happening? It's really difficult. I will make work and exercises for the public, and I call it the Abramovic method.

You hear of Stanislavski method for theatre? This is the time for Abramovic method.

Can you describe your method?

The method is based on the idea of cleaning the house. We are used to cleaning the outside house, but the most important house to clean is yourself – your own house – which we never do. For many years, I've done this with students: I start with inviting a group to a place in nature. This place has to be an extreme condition, too hot or too cold, never in-between, and we sleep all together in a barn with sleeping bags and do mental/physical exercises for five days without eating any kind of food, except water. No juices. This is very important. These exercises are designed to strengthen your willpower, to see how you work in a group and to understand your limits, how you manage anger – everything an artist needs to make a performance.

What would an exercise be?

I take you to the middle of the forest and I blindfold you and you have to find your way home. The blind man sees with his body. An artist has to see with his body, too. Or, I make three pounds of rice and sesame seeds, all mixed, and the student has to divide them, count them separately – that kind of concentration. If the audience and the performer do this kind of exercise, then they can meet in a territory of mutual understanding.

The mind is crazy thing. To be focused is the most difficult thing. To control the breathing is to control the mind. With different patterns of breathing, you can fall in love, you can hate someone, you can feel the whole spectrum of feelings just by changing your breathing.

It seems like your work is created as an antidote to the sensory overload of modern life?

Totally. Today, our attention is less than the television advertisement. We're looking at six or seven problems constantly. We're living in the disturbed societies of cities. I think modern technology is one of the worst things human beings have invented.

Do you practise all of this in your daily life?

Yes and no. I'm like a soldier. I only do what is necessary. Between things, I'm lazy. I like easy things. My life is hard with this kind of work. After a performance, I like to go to the countryside, swim in the river, eat chocolate and watch trashy movies – and I feel good about it. This is very human.

What kind of thinking would you like your work to encourage?

Everything is happening now. When you understand that concept, you understand everything. It's not past (already happened), or future (hasn't happened). The only thing we can relate to in our life is about this moment now. This is the only thing what matters. You and I talking. Next second we could be dead. This is the only reality we can live in. We have to be alert.

Marina Abramovic: The Artist Is Present screens at Toronto's TIFF Bell Lightbox on Tuesday at 8 p.m. (6 p.m. reception), with an encore screening on Sunday at 5:30 p.m. ( canadianart.ca). 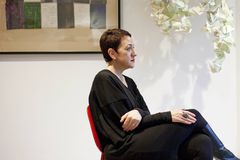