A favourite constructed image of Nick Cave's live concerts, like the recent barnburners at Toronto's Sony Centre and Montreal's Osheaga Music and Arts Festival, has the Aussie gloom-rocker backlit, his long shadow thrown against a wall like a character in an old German Expressionist horror movie. It's this impression – the silhouette, the outsized index of the man himself – that's front and centre in 20,000 Days on Earth, a new sorta-documentary tracking a fictionalized, painstakingly stylized day in the life of Cave.

"When the idea came up to do a Nick Cave documentary, I was not interested, at all," says Cave over the phone from Calgary this summer, when he was smack in the middle of a North American tour with his band, the Bad Seeds. "So the filmmakers were forced to go away and work out something that was more interesting, more playful, more creative."

Most rote rock docs are engaged with a laboured project of getting behind-the-scenes of their subject (think of the lame "… but backstage, things were falling apart" cliché of those VH1 Behind The Music specials), 20,000 Days makes no real attempt to peel back the mask of celebrity. For Cave and filmmakers Iain Forsyth and Jane Pollard, the mask's the whole thing.

"I think really the point of the film is that the mask doesn't really come off," says Cave. "It kind of calcifies under the face. You just become this thing, to greater or lesser extent. There are some artists who have such massive attention placed on them that they can't be anything other than monstrous. I won't mention any names."

To talk to the 57-year-old Cave is to talk about songwriting. In interviews as in his new film, he seems totally bored by anything else. "I've always talked about the process of songwriting," he says. "Very often there's not that much else to talk about. It consumes an enormous amount of my time."

In the new film, he's likewise consumed. For Cave, songwriting is a grind. There are no lightning cracks of inspiration or murmurs from a muse. It's work. He's constantly doodling lyrics and sketches on a notepad – something he maintains is just another of the film's constructions. "I don't have those moments where songs just drop out of the sky into a notebook. It's never worked that way for me. There's a fair slog that goes into it. I have to put a lot of time aside to do it. I do it every day."

By his own admission, Cave's music can tend toward the arch, often figuring the songwriter as its subject. "All my songs are about writing songs," says the guy whose latest record includes a song about writing another song on that same record. "My songs aren't like a James Brown song, which are like" – here Cave affects a croaky, semi-convincing impression of the late Godfather of Soul – "'Woah, baby! Huh!' They're immediate, and torn out of him. The only way I can write songs is from a narrative standpoint, for some reason. They always have that sense of remove."

So yes, Cave is a very serious songwriter, grappling nobly and tirelessly with grand themes of sin and redemption, of human love and loss, of the wretchedness of being alive at all. But his recent, nagging insistence on this seriousness – a deluxe edition of his latest studio record, 2013's Push the Sky Away, came bundled with a replica of his own lyric journals – risks dispelling the deeper secrets of his craft.

On Push the Sky Away's epic centrepiece, Higgs Boson Blues, Cave seems to be lamenting this same fading of mystery, tied to the discovery of the Higgs boson, the so-called "God particle" seen in pop science as the key to unlocking broad inscrutabilities of astrophysics. Yet in 20,000 Days, Cave seems be advocating for this same outing of the magical and mysterious. The film suggests there are no deeper secrets to songwriting, that absent some divine "gift," Cave's apparent facility with capturing the slipperiest of human emotions and twisting them into lyrical couplets, his improbable ability to rhyme "hernia" with "Guernica" with "furniture," is just the result of time dutifully spent at the drawing board.

Beyond the unappealing idea of Cave (or any artist, really) being little more than a Gladwellian Outlier clocking his 10,000 hours, it blows open a hole into the absent centre of 20,000 Days. The film wants to deny Cave's artistry, while simultaneously obsessing over his image as an artist. Aesthetically heightening the rhythms of a day in Cave's life feels like a compensatory gesture, like it's covering for something that's not there; a bespoke suit that gives shape to nothing.

"There's that crack," Cave says, "that everyone's an amateur outside of their field. In songwriting, I'm an expert. But outside of that, I'm an amateur."

Perhaps. Certainly the jack-of-all-trades Cave – sometimes actor, sometimes screenwriter, sometimes novelist, sometimes lecturer and theoretician of love songs – would like to be seen, first and last, as a serious songwriter.

But he's also a deft hand at weathering the rigours of rock stardom, weirdly satisfying the persistent expectations of fans and admirers by consistently remaking himself through a string of mediations and mutations. Who else would expend such effort self-mythologizing the banality of their daily life? Beyond the seriousness of songwriting, Cave's a seasoned posturer – an expert in the high art of Being Nick Cave. 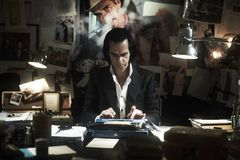 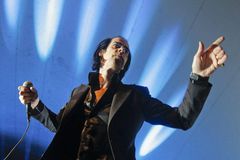