Detachment is only the second feature film from Tony Kaye, but his name resonates in Hollywood more than those of directors who've had greater success.

Regarded as an advertising genius in his native England, he came to California along with a great deal of hype for his first movie American History X (1998), which starred Edward Norton in an Oscar-nominated performance as a neo-Nazi. But when the film went over budget and past deadline, studio New Line Cinemas pulled him off the project and Kaye lost it. He took out multiple ads in movie trade publications attacking studio executives and declaring himself the greatest director since Hitchcock. He also tried to have the film credited to "Humpty Dumpty." And he went to meetings accompanied by a rabbi, a priest and a Buddhist monk.

There was further embarrassment in 2001 involving Marlon Brando, a teaching video series that went awry, purloined tapes and threatened lawsuits. In a Vanity Fair story on that mess, one of Kaye's former producers described him as "as talented a filmmaker as is alive" but, because of his self-destructive personal insecurities, also a "tragedy."

Since then, Kaye has made a documentary, Lake of Fire, about the abortion wars. It was unquestionably powerful, but because of its graphic footage was distinctly limited in its commercial potential. Other projects have stalled or been lost in development hell.

Kaye, now 59 but dressed in a hoodie and track suit, spoke by Skype about his new film. A childhood stutterer, he still occasionally pauses to find words – or stops to read an e-mail – and before long, frequently gives digressive answers. He seems, unexpectedly, vulnerable.

American History X, Lake of Fire and now Detachment, about the bankruptcy of the education system: Is it fair to say you have a particular interest in American social pathology?

Well, it certainly seems that way. I'm a tourist here and I've tried to do things that are socially aware – if you're an artist living where you weren't born you're sensitive to these things.

But Los Angeles is the only place I could ever live. No, that's not true. I could live in Toronto.

I'm serious. I'm a massive fan of what Piers Handling has done with TIFF. He was a tremendous ally during my maddened period when I finished American History X. Because it had been tampered with, improved upon, whatever it was, I didn't want it to go into the festival and Piers was supportive of me even though I turned up like a maniac with video cameras and burst into his office.

What was all that about? A publicity prank? A sustained manic episode?

It was a manifestation of ego. At the heart it was my passion, to do the right thing in the right way. And to make the best work I was capable of. Sadly, tragically, but also meant-to-be, I had to go through that. I always learn the hard way and I learned some incredible lessons in that time.

Being a filmmaker is not like being a painter or musician where you can, in a way, go mad publicly and do all kinds of stupid things and it can actually benefit you. A movie director doesn't really do anything. Really, it's just talking to people, sharing one's ideas and hoping that they're going to invest themselves – their money or their work – into what you say. If you want to do challenging work, you have to be the sanest person in the room and I didn't really know that.

How different was the experience of Detachment from that of American History X?

When the starting pistol went off, I had 20 days to shoot this stuff – I had to make certain decisions of how to invest what I had. I didn't make a movie about American education, or even about a teacher, but about how we, as human beings, go about our day and how we should try to help each other, and give love, and go to work. It's a really humble little film. This was one-tenth the budget of American History X.

A pivotal role is played by your own teenaged daughter, Betty. How did that come about?

I gave Carl Lund's script to Betty when she was 15, three years before she shot it. She was an actress but she'd never done a movie before. When Betty was growing up, I wasn't there anywhere near enough and I wanted this chance – but I said to myself that I wasn't going to give her the role unless she was the best person for that job. I cast for quite some time. I couldn't find anyone better and I made a long tape of her and took it to the producers and they all loved it and said, "Who's the actress?" It was pretty much the happiest moment of my entire life.

Your movie opens with a quote from the existentialist writer Albert Camus: "And never have I felt so deeply at one and the same time so detached from myself and so present in the world." Does that resonate with you personally? 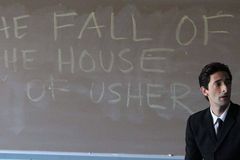