You have just fascinated Udo Kier with your opening question.

It is a half-distracted, "How are you?"

"How I am?" Kier says, putting the palms of both hands flat to his chest as if the "I" in this case is still to be determined. "I'm a very quiet person actually. If I wouldn't be an actor, I would be a gardener. I rescue dogs, so when I do promotion for a movie I can't wait to fly home, and I will sit on my ranch surrounded by mountains, and I will have a glass of wine in my left hand – I'm left-handed – and I'll see little lizards coming by, drinking a drop of water and a road runner goes by so, yes, I'm fine."

It is likely that you do not know Kier by name, but you know him.

The 73-year-old has perhaps the most remarkable face in film – piercing grey-green eyes set in the midst of a smooth, plinth-like head. It's a face made to elicit awe and fear. The Guardian once called him, "His satanic majesty."

Many of his more-than-200 roles – everything from the artiest art-house to schlock horror – have had Kier do little more than show up, be very German and look daunting.

Kier was in Toronto promoting two films at the Toronto International Film Festival – the brawny B-movie Brawl in Cell Block 99 (now available to stream on iTunes Canada) and the winsome tent-pole feature Downsizing (opening later this year). It's late in the festival and everyone is exhausted. Everyone but Kier.

Kier speaks in exclamation marks and sweeping arm gestures. He shimmies around in his barstool like a kindergartner with ants in his pants.

A flack wanders by to pull a water glass off the table in front of him because it is 100-per-cent guaranteed that Kier is going to send it flying once he gets worked up, which he appears to be about everything for every second of every day.

He was born poor in post-Second World War Cologne. Everything that has happened since seems the result of outrageous good fortune.

He was discovered on the street in London. He met Rainer Werner Fassbinder in a bar. He found his way into Andy Warhol's Factory because he struck up a conversation on a plane. He went to America for a little bit in the early nineties and never left.

"I stayed with a girlfriend, Ana. I had already packed my suitcase to go back. And Ana said, 'Why don't you stay?' And I said, 'No!' And, of course, after two glasses of red wine – in my left hand – I said, 'Great idea!' and now I'm still there. Everything came like that."

To get the full effect of this way of speaking, you must imagine it coming at you like a waterfall – no pauses – in a delighted Anglo-Deutsch purr.

He's got 10 upcoming films in some stage of completion. He has no agent – "… people just find me!" – and has a hard time turning down anything if someone asks, especially a friend. Kier has a lot of friends.

He's made many terrible movies, but he does have his standards – "I will not suffer on a film set!"

"Of course, if someone would offer me a million dollars for a shit film, I would think, 'My God, I could have a new roof!' The good thing about America is that if it's a bad film, nobody sees it anyway."

He's off to the Sitges Film Festival in Catalonia in a couple of weeks – "… and, since I'm there, I might just jump over to Santo Domingo and make a little film."

He's headed to China after that to do something. Since he hasn't read the script, he's not sure what it's about exactly, "… but I like to be a villain with all these Chinese people. I will stand out so much!"

He has said before that he will quit acting if he makes "the perfect film." But since he is having so much fun, he walks that back now.

"I will leave if I would be able to see myself, which I will never. Nobody of us has ever seen ourselves! We see a reflection in the mirror. I see your eyes, but you have never seen your eyes."

And then he stares at you very hard for a very long time, which is somewhere between hypnotic and terrifying.

The same flack walks back to break things up because Udo could do this all day.

"Do you have a card?" he wonders slyly.

You don't. The flack says tells him they have everyone's details on file.

"Good," says Kier, suddenly serious. "I will contact you." 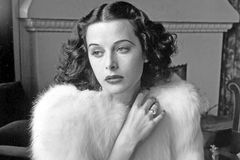 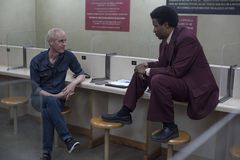 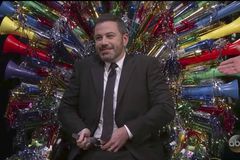