The summer headlines heave with the autopsies of Bennifer (part deux), and they rattle with tremors from Donald Trump. It's showbiz, or at least a showbiz split, being rolled out with the exactness of a political campaign – and politics in extreme carnival-barker mode. Amazingly, there's a connection between the saga of Ben Affleck and Jennifer Garner unspooling with that of the man now gunning for the White House.

Back at the curtain-rise of the 1990s, Trump and his then-wife, Ivana, embarked on a divorce so loud and so salacious that it created the pace for divorce-voyeurism ever since, building the template for the tabloid split-erati, as it were.

Twenty-five years ago, in a tale that encapsulated yuppie-era greed, an opera choreographed by the Trumps stayed on the first pages of newspapers for three straight weeks, becoming so huge it, ahem, trumped all other news, including the end of apartheid in South Africa. Permit me this hindsight 20/20: Had it not been for the Trumps' divorce – which included such thunderbolts as the cover of the New York Post blaring, "Best Sex I Ever Had!" from Trump's storybook mistress, Marla Maples; and Ivana later showing up in the movie The First Wives Club to spout her trademark line, "Don't get mad, get everything" – Trump wouldn't have moved from businessman to bona-fide personality. There might not have been a Celebrity Apprentice. There might not have been the next-generation platform that exists for daughter Ivanka et al. It all might not have even led to this current (perhaps delusional) Trump bid for the Republican presidential nomination.

Naturally, the course of divorce never did run smooth – particularly not since a real-life copywriter named Mary Frances Gerety dreamed up the phrase "a diamond is forever" for De Beers in the 1940s. Illusions have been blistering ever since. Add public personas – and money – to the mix, and up swings the ante.

The Jen-Ben end, unfolding now in your supermarket aisle and TMZ homepage, is likely the biggest intra-movie-star split to happen since, oh, Tom Cruise and Nicole Kidman last decade. It sprung no shortage of sad-face emojis, primarily because their family of five (two daughters and a son) seemed just glamorous enough, but not too glamorous. Affleck has his two Oscars (plus Batman's cowl), and Garner was a mother for a Pinterest age. As one observer put it, they reigned "as the couple I most wanted to be the third wheel with at a wine tasting."

Still, the Psycho theme for their marriage had sounded back in 2013, when, while accepting his best-picture Oscar for Argo, Affleck soothed to Garner, "I want to thank you for working on our marriage for 10 Christmases. It's good, it is work, but it's the best kind of work, and there's no one I'd rather work with." That Affleck had simply stated a truism – relationships are indeed work – was beside the point. Saying it out loud was deemed to be unchivalrous.

After months of are-they-or-aren't-they? amber alerts in the tabs this spring, the die was cast just days before the July 4 long weekend – and it all quickly became an exercise in spin control redolent of the Trumps. Unlike Trump's clan, however – who also had three young children but were characters straight out of a real life Dynasty, and who giddily waged a pre-social-media war on one another with his-and-hers dowager gossip columnists – the Affleck-Garners presented a united front with a joint declaration of separation. Coming in a post-Unconscious Coupling world, they pulled a Gwyneth Paltrow by flying off together as a family to the Bahamas after the news. Theirs was a spin control that left no fingerprints.

The tropes for a boldface breakup are, by now, predictable, tapping into hard-wired gender narratives. There is the men-will-be-men narrative, as espoused by the National Enquirer, which quoted a source as saying: "Ben is in the grips of a midlife crisis. … He's at a crossroads." Then, there was the she's-a-pill card, exemplified by a New York Daily News report, which had an "insider" spilling, "Jennifer loves drama and absolutely thrives on it. She used to play games with her ex-husband/co-star Scott Foley by calling Ben on her cellphone right in front of Scott." More commonly, there's a certain amount of martyrdom now being extended to Garner, in the same way there was with Ivana, at the time.

Breaking up is hard to do, sure, but saying no to a major endorsement deal is even more trying. In 1995, some time after Trump and Ivana had agreed to disagree, the two appeared in a commercial for Pizza Hut. Hell hath no fury like steamy crust, it turns out. "Can I have the last bite?" Ivana asked her ex in the ad. "Actually," Trump interjected, "you're only entitled to half." In the celebrity-sphere, where everyone has something to shill, these two managed to take their hate for one another and turn it into its own marketable product. A way forward for the Affleck-Garners, perhaps? If Ben could survive Gigli and Jennifer could weather The Odd Life of Timothy Green, undoubtedly they can make it through this. The meaning of Donald Trump: How to get rich by going too far
July 2, 2015 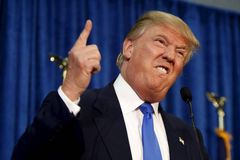