Fortunately, at least for moviedom, this didn't happen. But it could have, says the man himself.

During an interview at the Toronto International Film Festival, the 34-year-old actor/producer/director from Mexico recalled how in his (much) younger years he "wanted to be everything. I wanted to do every kind of job." But after a string of successful appearances in Mexican soap operas, he decided, at 18, to study philosophy at the Universidad Nacional Autonoma de Mexico. While he enjoyed it very much, the lure of acting soon struck again with the opportunity to travel to London to study at the Central School of Speech and Drama. We all know what happened next – much-noticed roles in films such as Amores Perros, Y tu Mama Tambien, Babel and Bad Education, where his liquid eyes, sensual mouth and incandescent smile prompted the usually hard-to-please Anthony Lane of The New Yorker to call him "[one of] the most insanely watchable actors in movies right now."

"I think if I wouldn't have become an actor," Garcia Bernal continued, "I would have done something related to philosophy or the academy. But the urge of me wanting me to be everything made me want to become an actor because as an actor, I can be everyone and try everything and get away with it!"

Get away with it he most certainly does in No, the latest feature from Chilean director Pablo Larrain in which Garcia Bernal plays a hot-shot advertising executive named René Saavedra. A hit last year at TIFF as well as at the Cannes and Telluride festivals, No went on to score a nod from Oscar as best foreign-language film, only to lose to Michael Haneke's Amour. Now the movie's set to play commercially in Vancouver, Toronto and Montreal, starting Friday.

It's 1988 in No, the setting Santiago, where the junta headed by General Augusto Pinochet has been ruling Chile, courtesy of a coup d'état, for the last 15 mean years. There is a glimmer of hope in the dictatorial darkness, however: Bowing to international pressure, the generalissimo has agreed to hold a nation-wide plebiscite on his rule. Vote "yes" and he stays on as president until spring 1997; vote the negative and he's out after a year, with a newly elected president and congress assuming power in March 1990. Joining the "no" side as its director of TV strategy is none other than Saavedra.

On first inspection, Saavedra's a rather unlikely recruit. Yes, his parents fled Chile for Mexico when he was a youngster – but now, separated from his wife, a doting father to a young son, he's largely apolitical, seemingly content to crank out inoffensive commercials for soft drinks while enjoying the perks (a microwave!) they bring. Besides, his boss, Lucho (Alfredo Castro), is a big-wig on the heavily financed, heavily favoured "yes" team, while the "no" squad, all grim-faced earnestness and self-righteous indignation, is convinced the best their campaign can do is "raise awareness," not topple a government.

Saavedra, however, thinks an audience's adherence to a particular political regime can be swayed by the same laws of advertising that persuade it to try a new cola, deodorant or car. It's about the promise of happiness, not grinding axes or revisiting old hurts, scoring rather than settling scores.

Toronto, it turns out, was the starting point for Garcia Bernal's involvement with No. This was in 2008 when the actor was at TIFF promoting Blindness, the Fernando Meirelles-Don McKellar adaptation of the famous José Saramago novel in which Garcia Bernal was starring alongside Julianne Moore and Mark Ruffalo. Larrain was at TIFF, too, promoting Tony Manero, the first of what would be a trilogy of well-received, historically informed fiction features anatomizing the Pinochet regime (the second, Post Mortem, was released in 2010). For several years Larrain had been carrying around and tinkering with a script loosely based on a play by Antonio Skarmeta (Il Postino) titled The Plebiscite or How to Defeat a Dictator Through Poetry. He and Garcia Bernal met; "we talked quite a lot"; the actor read the script; a friendship was quickly formed and less than three years later they were making the movie.

Garcia Bernal acknowledged No was a homecoming of sorts. "Even though I'm not Chilean, I grew up with a lot of exiles. Exiles played a big part in the story of Chile after the 1973 coup and they still do. I don't know how many there were. Uruguay, Bolivia, Argentina, Peru – all these places that had strong military dictatorships also had a big diaspora and Mexico is a place where many of these people went."

It was a homecoming, too, in that the actor got to re-embrace the political intensity that's never far from the surface of everyday life in Latin America – an intensity Garcia Bernal has lived in art (he was, lest we forget, the young Che Guevara in 2004's The Motorcycle Diaries) and in life. At 15, for example, he demonstrated in support of the Zapatista movement in the Mexican state of Chiapas. At 23, he joined protesters at the G8 Summit in Edinburgh. More recently, he's made films for Amnesty International and represented Oxfam International at various summits and conferences.

It's not all acting and activism, though. While it's not been uncommon for Garcia Bernal to appear in as many as three films a year, No was the only movie he acted in in 2011. Why? "Well, I had a little baby girl [with his partner since 2008, Argentinian actress Dolores Fonzi]," he answered with a most beamish smile. "And so I didn't want to work much. It was a good thing to take some time off and to only do this film. I hope I'm able to do this always, in fact. To only do one film a year? Fantastic, incredible. But it would have to be as good as No, yes, and that, my friend, is a complicated state of affairs in the movie business." 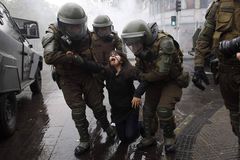 Nostalgia for the Light: From Chile, a painful and beautiful meditation
May 11, 2018
Follow James Adams on Twitter @Jglobeadams
Report an error Editorial code of conduct
Due to technical reasons, we have temporarily removed commenting from our articles. We hope to have this fixed soon. Thank you for your patience. If you are looking to give feedback on our new site, please send it along to feedback@globeandmail.com. If you want to write a letter to the editor, please forward to letters@globeandmail.com.
Comments