Sometimes a film is more than just a film. Sunday night's Palme d'Or win for the lesbian drama Blue Is the Warmest Colour marked not only the first time a same-sex love story has won the award, but also the first time the prize has been given to both a film's director and its stars. That instantly made it a cinema milestone, poised to become one of the most influential films of the year.

The three-hour drama, which screened on Wednesday night, instantly became the most talked-about film of the festival for its explicit sex scenes, but also for the raw intimacy of the performances.

After Sunday's awards ceremony, jury president Steven Spielberg said the jury had no reservations: "For me, the film is a great love story that made all of us feel like we were privileged to be flies on the wall, to be invited into this story of deep love and deep heartbreak."

The festival's other major gay-themed film was Steven Soderbergh's Behind the Candelabra (which aired on HBO on Sunday night), about pianist Liberace and his relationship with his young assistant, Scott Thorson. Both the director and stars, Michael Douglas and Matt Damon, described the story as being about a gay marriage in all but name, and made a point of referring to France's legalization of gay marriage on May 18, as well as in 13 U.S. states.

The unprecedented decision to give the Palme to both the director and the actresses adds to the impression that Blue Is the Warmest Colour was a special case, that the young stars had, so to speak, gone the extra mile for their art. In practice, Spielberg and his jury found a way of working around a recent festival policy of avoiding multiple awards to one film; instead, they gave one award to three people for their collaboration.

"It was an obvious conclusion that without Léa [Seydoux] and Adèle [Exarchopoulos], the synergy could not have happened," Spielberg said, and that if the casting had been slightly different, the film would not have worked. "It was the perfect choice from a sensitive filmmaker."

The film's Tunisian-born French director Abdellatif Kechiche drew an analogy between the young women's search for freedom in the film and the Arab Spring: "Young people in France are often way ahead of my generation in their thinking, and they are open to the world. Tunisian youth are the same: That's why there was a revolution."

Also there was just nothing like it at this year's festival. The sprawling, emotionally messy story, shot in relentless closeups, stood out from a series of modest, well-made films from directors who, in most cases, were not offering surprises. That gave the overall tone of this year's festival, before Blue Is the Warmest Colour's release, a "good, but…" quality.

The handful of best films were obvious and, with a couple of exceptions, the critics and jury agreed. Joel and Ethan Coen's Inside Llewyn Davis, a slender portrait of a Greenwich Village almost-famous folk singer (Oscar Isaac) took the runner-up Grand Jury Prize, while Japanese director Hirokazu Kore-eda's drama, Like Father, Like Son, about a yuppie dad who discovers his kid was switched at birth, was more pleasing than profound.

The jury, which consisted of five directors (Spielberg, Ang Lee, Lynne Ramsay, Naomi Kawase and Cristian Mungiu) and four actors (Nicole Kidman, Daniel Auteuil, Christoph Waltz and Vidya Balan), rewarded other strong contenders with acting awards. The Past, a well-constructed drama of family secrets from Iranian director Asghar Farhadi (A Separation), seemed sure to take at least one prize – and it went to Bérénice Bejo (The Artist) for best actress, as a French woman who summons her Iranian husband to Paris to finalize their divorce. Similarly, an acting award went to 76-year-old Bruce Dern, beating out a number of strong performances in other films, in order to pay tribute to Alexander Payne's latest road-trip movie, Nebraska.

Chinese director Jia Zhangke, an obvious contender for best director, won for best screenplay instead, for A Touch of Sin, four stories of violence in modern China, embellished in characteristic observational style with a few unexpected genre flourishes.

One film that got overlooked was Italian director Paolo Sorrentino's The Great Beauty, starring Toni Servillo (Il Divo) as a burned-out journalist in a visually lavish update on Federico Fellini's La Dolce Vita, but one that preferred its nihilism more hard-boiled.

The directing prize went to Mexican filmmaker Amat Escalante for his third feature, the deadpan drug-war drama Heli, which features a torture scene so pitiless and prolonged, it begins to lose effect as you start wondering how it was staged. "I didn't expect this," Escalante said as he accepted his award.

Neither did many others, but upsetting expectations is what makes Cannes great, at least sometimes. Last year, the festival gave us Michael Haneke's Amour, a French drama of the end of life and love. This year, it gives us Blue Is the Warmest Colour, marking the fevered beginnings of life and eroticism. And even if it doesn't turn out to be the Arab Spring of same-sex love, it already feels like more than just a movie.

Character actor Bruce Dern, the 76-year-old winner of Cannes's best-actor prize for his role in Alexander Payne's Nebraska, is the veteran of more than 80 movies. Here are some things he wants you to know.

1. The script and direction for Nebraska were so good, he only did one Dernsey.

"Dernsies," a term invented by his friend Jack Nicholson, are "little things you do – either character things or interjections of dialogue that are not on the page."

2. He has worked with six geniuses:

3. A long-time distance runner, he was never a Hollywood party animal, though he screwed up with painkillers:

4. The three great disappointments in his career are: That horror king Roger Corman was never allowed to make a major motion picture, that Jack Nicholson was not allowed to direct a movie he didn't star in after Drive, He Said and that Michael Cimino was "so badly treated after Heaven's Gate."

"Laura and Billy broke up just as it was going to be coming out, so it never got any press and wasn't released. But it's really funny. Rent it."

Drama on same-sex relationship wins top prize at Cannes
May 26, 2013 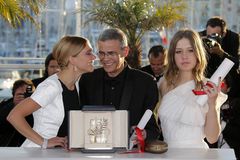 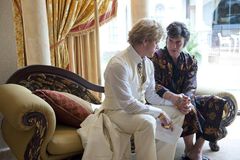 Film Review
Nebraska: Thoughtfully wrought and built to last
May 23, 2013 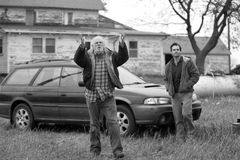 Behind the Candelabra: A Liberace tale of romance and malice
May 25, 2013 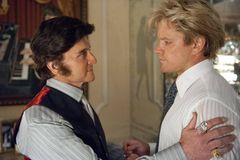