There's a story told by the Canadian film crew who worked on Mr. Magorium's Wonder Emporium a few years back – about the day Kermit the frog appeared to do a cameo. So what if Dustin Hoffman and Natalie Portman were on the Toronto set? It was Kermit that had them star-struck.

This was part celebrity magic – here was the most famous frog in the world – and part puppet magic, as the grown-ups willingly suspended disbelief to give life to the inanimate.

"You just sort of stare into those plastic eyes and go with it," says CBC Television host George Stroumboulopoulos, who recently interviewed Kermit on his show The Hour – while Kermit's human operator lay at his feet.

Kermit was back in Toronto to publicize The Muppets, the holiday movie that opens next week and marks the colourful puppets' first big screen appearance in more than a decade. Despite that absence, they have never left the culture; witness the Sesame Street generation's affectionate YouTube mash-ups of the Muppets covering Radiohead, AC/DC and Nirvana. They are the most popular and widely copied puppets of their time and their look – wide mouths, googly eyes, colourful bodies – has come to define puppetry in North America.

Professional puppeteers say their owe their legitimacy to Muppets creator Jim Henson, attributing the characters' success to their humorous relationships and rainbow skin tones as well as technical innovations that made them work on TV.

"Growing up, when I said I wanted to be a puppeteer, nobody knew what I meant," said Ronnie Burkett, the Canadian performer acclaimed for very grown-up shows about love and death enacted by marionettes. "As soon as Jim Henson became famous, everybody knew what a puppeteer was. He was the Walt Disney of puppets."

Once upon a time, Punch and Judy was a folk entertainment for all ages, but by the 1950s, as the rise of TV took its toll on live performance, puppet shows were regarded as children's fare. They did migrate to television, but awkwardly, leaving the jerky marionette Howdy Doody bouncing around the screen.

Henson's genius was to recognize that the television screen could function as the frame of the old-time puppet booth: The operators did not need to be hidden between a screen or scenery; they just needed to be off-camera.

"You can come in from the bottom, the side, the top [of the screen] whereas with a marionette you are stuck coming in from above; you are stuck with Howdy Doody," says Toronto puppeteer David Powell.

And the Muppets were not made of wood, but of foam rubber that allowed the camera to focus on moving, expressive faces. Children's television had seen plenty of hand puppets, creations like Shari Lewis's Lambchop, whose soft form and pastel colours influenced the Muppets' creator, but Henson's foam heads were larger and manipulated with the whole hand. He also insisted that the puppeteer's voice be in sync with the movements of their mouths, further adding to the naturalism of the effect.

And why did audiences of the 1970s so embrace these expressive characters as they made their appearance, first on Sesame Street and then The Muppet Show? They were funny and, most of all, their relationships were funny, well observed and fairly complex, puppeteers say, pointing to the sunny Ernie and the grumpy Bert, or the aggressive Miss Piggy and her unrequited love for Kermit.

"So many people talk about the two old men in the balcony [on The Muppet Show] they see themselves in them," said Vincent Anthony, executive director of the Centre for Puppetry Arts in Atlanta, an institution that plans to build a museum to house Henson's original puppets and props. "He stuck a chord with the human factor."

The original puppeteers were key to creating those Muppet relationships, Frank Oz playing Bert to Henson's Ernie. Where traditional puppetry, such as Japan's Bunraku or Britain's Punch and Judy shows, uses iconic characters reinvented by each generation, contemporary puppetry is often an individual, multi-disciplinary art form in which the puppeteer both builds the puppet and creates its character, operating and voicing it himself.

Indeed, some puppeteers wonder whether you can really hand over the Muppets to a new generation of operators without them becoming blander, each one a cartoon brand like Mickey Mouse rather than a living theatrical character.

"Jim was not known for being precious about his puppets; he viewed them as tools," says Toronto puppeteer Frank Meschkuleit who worked on Fraggle Rock. "And yet he brought a magic to it that I don't think has been repeated since he passed. ... It just doesn't seem to have the warmth it used to."

The Muppets' magic went further still when they hit prime time: The arrival of The Muppet Show in 1976 introduced to North America the idea that puppets were a popular entertainment for adults too.

That breakthrough should not be underestimated.

"No TV station in the States would back it; he had to go to England to get it produced," Anthony says. "It was looked at as being very avant-garde, very risky by the American TV establishment."

And yet the characters could hardly have been safer. " The Muppet Show was always positive," Stroumboulopoulos recalls, citing Kermit as his first role model as a TV host. "There were problems backstage, but they were always overcome."

Indeed, the Muppets' niceness was so pronounced it actually encouraged other puppeteers to push in the opposite direction. Most obviously, the 2003 Broadway musical Avenue Q and its Muppet-like puppets and the 1989 cult film Meet the Feebles, with its misanthropic animal creatures, both derived their humour from introducing the icons of childhood into a nasty adult world of ambivalence and disappointment.

More subtly, the complex themes favoured by art puppeteers such as Burkett or Calgary's Old Trout Puppet Workshop, which invents a new style of puppet for each show, contradict the Muppet-inspired notion that puppets are family entertainment. It can be uphill work: Old Trout Judd Palmer recalls that his company once tried to revive Punch and Judy, but parents would bring their kids to the show and then complain about the violence.

"I guess that is taking a stand against the niceness of the Muppets but I wouldn't do it now," he said. "You are banging your head against a wall."

Not that the Muppets, who are rumoured to behave lewdly the minute the camera is turned off, would necessarily be opposed to pushing the envelope. The original characters were purchased by the Walt Disney Company in 2004, but since Henson's death in 1990 his children have supervised his legacy; in particular his youngest, Heather Henson, has greatly encouraged the adult puppetry movement by organizing puppetry festivals and supporting Puppet Slam, an online network of underground puppet artists.

Meanwhile, the Disney-owned Muppets can count on the fond memories of a generation raised on Sesame Street, as well as a dose of geek chic, to bring audiences flocking. Jason Segel, co-writer and star of the new film, established his credentials with his turn as a nerdy, jilted puppeteer in the 2008 comedy Forgetting Sarah Marshall, operating a Muppet-like Dracula character who sings a song of lost love. With The Muppets he turns to pure nostalgia, sending human characters off to dig Kermit out of his lonely mansion and rescue Fozzie from a seedy Vegas bar where he performs with Muppet knock-offs so they can restore the franchise to its former glory. Shouldn't be too hard to do: The Muppets' star has never stopped shining.

PUPPETRY ON STAGE Canada has an enviable reputation for live puppetry. Here's what's coming up:

Ronnie Burkett Burkett and his marionettes are currently in the midst of a national tour, performing Penny Plain, an apocalyptic drawing-room comedy about a blind woman waiting for the world to end. The show is now at the Vancouver East Cultural Centre until Dec. 17, and opens at Toronto's Factory Theatre on Jan. 20.

Puppetmongers Toronto's Puppetmongers, a.k.a. Ann and David Powell, make their annual holiday appearance for children at Toronto's Tarragon Theatre beginning Dec. 14. This year they perform Bed and Breakfast, an update of the Princess and the Pea fairy tale set in a miniature Edwardian mansion full of wily servants and real electrical light.

Old Trout Puppet Workshop Calgary's Old Trout Puppet Workshop is currently working on Ignorance, a show with puppets made from stones, sticks and leather that explores the idea that puppetry dates back to the days of the caveman. It will receive a world premiere at the Vancouver East Cultural Centre on Feb. 28, but in the meantime the company is still accepting suggestions about how to write the script and build the puppets at www.theoldtrouts.org/ignorance.

Editor's note: Jason Segel is a star and co-writer of the film The Muppets. James Bobin is the director. Mr. Segel also wrote and starred in Forgetting Sarah Marshall. Incorrect information appeared online and in print on Saturday. 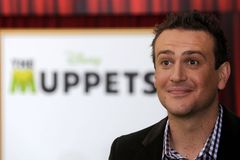 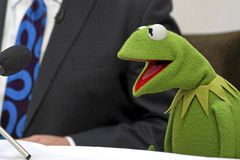 It's Doomsday, and these are definitely not the Muppets
November 18, 2011 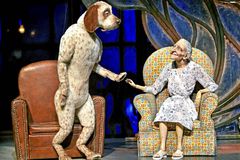