Describing Toni Erdmann, you begin to feel as though you are telling a rather feeble ethnic joke: It's a German film; it's 2 hours, 40 minutes long. It's a comedy!

Winner of the critics' prize at Cannes last May, much noticed at the Toronto International Film Festival in September, nominated for the Oscar for best foreign film this week and now finally hitting the art houses, Toni Erdmann is writer/director Maren Ade's third feature and a highly unusual piece. The story of a prankster father who disrupts the professional life of his buttoned-down daughter, it is a prolonged comedy of mortification.

The audience suffers alongside the squirming Ines, a German management consultant in Bucharest, during the inopportune visit of her father, Winfried, a man with a fondness for false teeth, shaggy wigs and tall tales. And yet, to hear Ade tell the story, in an interview at TIFF, this unexpected film began with a rather familiar premise.

"I was interested in family topics, all the roles everybody plays in the family or has achieved over the years, no matter if he likes that role or not. It is something static, hard to break out of," she said. "That was the starting point, that I wanted two family members to role play. Father and daughter were there from the beginning. What was also there was this construction: He's a joker and she is very serious in contrast, that she has chosen a different life. A very simple thing."

Yes, Ade confessed, like the awkward and inconvenient Winfried, her own father used to pull out a set of joke-shop teeth – although she says the prank never embarrassed her, but did make her think about the motivation behind a much-repeated routine.

"My own father is also an inspiration; he has a good repertoire in joking," she said. "He also did for a while the thing with the teeth. He never stayed long in character, he put them in to make fun with a waiter or something like that. But it interested me, the idea that a non-actor starts to act, to perform something."

And that presented the real challenge for Peter Simonischek, the Austrian stage actor playing both the practical joker and the oversized personae he hides behind (who introduce themselves by the pseudonym Toni Erdmann).

"The most difficult thing for Peter, or the most work, was that he is playing a real person who is starting to act or perform … but [who] is not a good actor. And, in the end, it should be funny," Ade said. "It's a thin line Peter had to walk. He always said, for him, it is normal to act and he needed to understand how big this adventure is for someone who is shy."

Both Simonischek and Sandra Huller, who plays Ines, are experienced theatre actors, which perhaps explains the pair's remarkable concentration through scenes that keep playing long after the quick laugh has passed.

"It felt a bit like on stage," Ade says of their shoots, where she sometimes let the camera roll from one scene to the next without stopping. "They took over responsibility for the characters a lot."

In one unforgettable extended set piece, Winfried's ebullient Toni Erdmann character pretends to be the German ambassador at a local party, forcing Ines, whom he has introduced as his assistant, to remain at his side. Finally, he insists that his daughter sing for the bemused Romanian guests, at which point the dour Ines gives in and belts out the cloying Whitney Houston hit The Greatest Love of All.

"We had takes that were 10 minutes long," Ade says of her method. "I like the moment when the film becomes the reality and for this I need time. In the end I can edit, but this leads to a certain rhythm that is slower. Like in reality. I think the film needed that time because you needed to understand where they come from and, for the humour [to work], certain surprises needed preparation. It needed to be boring."

The punchlines are not always as remarkable as Ines's song; some scenes flicker out rather than burst into flame, testing an audience's patience. But Ade makes no apology for the film's running time, despite attempts to cut it in the editing suite.

"I tried to shorten it. With that length you really have to be sure. It felt in a way longer when it was short. It lost some of its complexity. It became banal, scenes between a father and a daughter."

You can just imagine what Hollywood would make of this film, chopping it down to two hours, picking up the comic pace, adding lots of slapstick and insisting on a more decisive resolution. Critics have floated the suggestion of a remake, but also groaned at it; Ade herself, in a recent interview with the German tabloid Bild, did not dismiss the idea outright, merely saying she would not be the person to direct such an effort.

Perhaps she knows that a Hollywood Toni Erdmann would mainly reveal why her vision is so original. 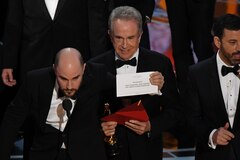 Review
The Red Turtle: A visually compelling, intriguing and unspoken tale
April 13, 2017
Follow Kate Taylor on Twitter @thatkatetaylor
Report an error Editorial code of conduct
Due to technical reasons, we have temporarily removed commenting from our articles. We hope to have this fixed soon. Thank you for your patience. If you are looking to give feedback on our new site, please send it along to feedback@globeandmail.com. If you want to write a letter to the editor, please forward to letters@globeandmail.com.
Comments