A decade ago, Russell Crowe and Renée Zellweger starred together in Cinderella Man. He played a broken-down boxer fighting for a comeback; she played his loving wife. At the time the film was shooting, he was 40; she was 35.

Today, she's 45, and has apparently subjected herself to plastic surgery so radical she is unrecognizable, her distinctive chubby cheeks and droopy lids replaced with a thinner face and wider eyes. She also hasn't had a hit movie in years, which may be why she felt the need to change her appearance.

Meanwhile, Crowe has starred in Noah, Les Misérables and Robin Hood and, now a grizzled 50, has told an Australian magazine that middle-aged actresses complaining about a lack of parts just need to take age-appropriate roles instead of expecting to be cast as the ingenue.

"The best thing about the industry I'm in – movies – is that there are roles for people in all different stages of life," he told The Australian Women's Weekly as he patted himself on the back for playing the father of adult sons in his new movie The Water Diviner. "To be honest, I think you'll find that the woman who is saying that [the roles have dried up] is the woman who at 40, 45, 48, still wants to play the ingenue, and can't understand why she's not being cast as the 21 year old."

Well, A Beautiful Mind notwithstanding, nobody ever cast Crowe for his brains. There has been understandable outrage on Twitter over his remarks; apparently, Crowe is completely blind to both his white, male, movie-star privilege and to the ferocious double standards that persist in the movie business when it comes to age-appropriate casting. After he suggested Meryl Streep and Helen Mirren were proof the complaint was "bullshit," he went on to say that, for his part, he could not be the Gladiator forever.

Well, perhaps if offered the role today, the wrinkled, paunchy Crowe would now decline to play the muscled warrior he created 15 years ago, but he thinks nothing of casting himself as the romantic interest of a woman 15 years his junior. In The Water Diviner, which he directed himself, his co-star is the 35-year-old Olga Kurylenko, playing a local who helps his character, an Australian who has travelled to Turkey after his three sons are lost at the battle of Galliopoli. The character is a sympathetic, widowed Turkish hotel keeper, but if you're thinking head-scarf and grey hair, think again. Kurylenko is, of course, heart-stoppingly beautiful.

Crowe is by no means the only offender in the May-December casting game: Harrison Ford, who is probably the worst, was 66 when he returned to the role of Indiana Jones, playing against a 39-year-old Cate Blanchett; Sean Connery was stupid enough to try a comeback romp with the Bond girls at age 53 in Never Say Never Again. Still, if you look through Crowe's résumé, you will be hard pressed to find a female co-star his age or older. In Noah (and A Beautiful Mind) he co-starred with Jennifer Connelly, now 44; his co-stars for Broken City (Catherine Zeta-Jones) and Robin Hood (Blanchett) are both five years younger.

The movies remain a deeply sexist business, and if middle-aged actresses complain about a lack of parts, it is because producers prefer that female leads be played by women under 40 – realism be damned. I know a Canadian actress who, not long after her 40th birthday, was told by a casting director that she was too old to appear on screen as the wife of her own husband, an actor then in his mid-40s.

If such a woman considers plastic surgery, who can blame her? She has been told that her career depends on not looking her age. Streep and Mirren are two unusual examples who have managed the difficult transition to the honoured place of gracious grande dame. There's only room for a couple of them and, in a field where there are already more parts for men to begin with – Crowe has made a specialty of all-male movies such 3:10 to Yuma and Master and Commander – their female peers have simply left the screen while their male peers are busy kissing women of the next generation.

I am not sure if the May-December thing really plays to the fantasies of those young male movie viewers the studios are always courting – after all, the young men who go to movies can have some expectation of dating real young women. Perhaps what it reflects are the weirdly out-of-date fantasies of male movie executives who apparently still inhabit a world in which male power buys female sexuality. It will take audiences, who are often well ahead of the studios on social issues, demanding more realistic portrayals of women for things to improve. In the meantime, Crowe should go soak his old, grey head – and find himself a 50-year-old co-star for his next project. 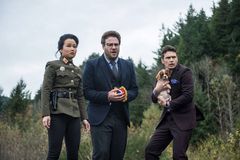 Kate Taylor: How Potted Potter wove its magic in the murky world of copyright
December 24, 2014 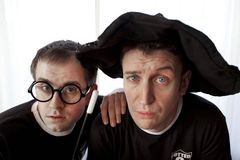