‘O! how shall summer’s honey breath hold out, against the wrackful siege of battering days?” wrote William Shakespeare, which really says it all when it comes to summer movies.

Starting with this weekend’s $200-million, three-villain The Amazing Spider-Man 2, the battering season is on, baby. Coming soon are Godzilla, X-Men: Days of Future Past and Transformers: Age of Extinction. There are sequels such as Dawn of the Planet of the Apes and The Expendables 3, along with Edge of Tomorrow, with Tom Cruise fighting aliens, and Hercules, with Dwayne Johnson throwing down as a Greek demi-god.

Though the “summer is dumber” rule is partly true, it’s only a subplot in the larger story. The next four months will also offer lots of family and teen films, original comedies, extravagant fantasies and – good God almighty! – a biography of soul sensation James Brown to maintain the heat until September. What follows is a sampler of some of the most promising, and unavoidable, late-spring and summer offerings.

Seth Rogen and Rose Byrne star as new parents whose lives are upended when a fraternity, headed by Zac Efron, moves in next door. The film, which made its debut at the SXSW Festival, may be big on visual gags and lewd humour, but it has earned positive feedback (“winningly stupid” says Variety) with particular praise for Efron as the frat boy from hell. May 9

“Jane Austen meets the slave trade” is the intriguing angle on this historical drama inspired by a 1779 portrait of the mixed-race Dido Elizabeth Belle and her cousin, Lady Elizabeth Murray. They were both nieces of William Murray, Lord Chief Justice, who was instrumental in bringing about the end of slavery in England. The second film directed by former child actress Amma Asante, it features Gugu Mbatha-raw, Tom Wilkinson, Emily Watson and Matthew Goode. May 9

Sixty years since his film debut, Godzilla rises again to save a defenceless humanity against other monsters, while facing ruthless shaming from Japanese fans who complain that he looks fat! With Bryan Cranston, Aaron Taylor-Johnson, Ken Watanabe, Elizabeth Olsen, Sally Hawkins, Juliette Binoche and David Stathairn, perhaps it could be retitled Breaking Big. May 16

John Hamm takes a break from his progressive disintegration as Don Draper on TV’s Mad Men for a star turn in this inspirational Disney sports drama (echoes of The Blind Side). He plays J.B. Bernstein, the real-life baseball scout who recruited two Indian cricket players, Rinku Singh and Dinesh Patel, through a reality TV show. Craig Gillespie (Lars and the Real Girl) directs and Alan Arkin adds some curmudgeonly levity. May 16

X-Men: Days of Future Past

The current incarnation of the century’s most prolific comic-book franchise has a corporation-sized cast – Michael Fassbender and James McAvoy, and, as their mature selves, Ian McKellan and Patrick Stewart, along with Ellen Page, Anna Paquin, Peter Dinklage, Hugh Jackman, Halle Berry and Jennifer Lawrence. The plot involves future and past X-Men combining forces, and features Jennifer Lawrence in a form-fitting blue costume. May 23

The third comedy co-starring Adam Sandler and Drew Barrymore (The Wedding Singer, 50 First Dates) casts them as single parents who have a bad first date, and then find themselves booked on the same African holiday. Amid high-fiving African guides and obstreperous ostriches, hilarity ensues. So far the trailers give no hint of the expected elephant poop. May 23

Angelina Jolie, adorned in blood-red lipstick and black mountain goat horns, takes on a part that confirms her tabloid-imposed witch persona. The title character is Disney’s best-known villainess, the wicked fairy godmother from Sleeping Beauty (1959), who curses Princess Aurora (Elle Fanning). Expect a reconciliation along environmental lines. Following last year’s Saving Mr. Banks, it’s tempting to wonder what else Disney can do to raid its own history. Anyone for Goofy: The Lost Years? May 30

A Million Ways to Die in the West

Yes, his Oscar-hosting job tanked, but his first movie, Ted, was funny. Family Guy creator Seth MacFarlane returns in this comedy-western that follows the tradition of Bob Hope’s The PaleFace (1948) and Don Knotts’ The Shakiest Gun in the West (1968) as an inept cowboy who befriends a gunslinger’s wife (Charlize Theron) to help win back his love (Amanda Seyfried). May 30

This is Doug (The Bourne Identity) Liman’s sci-fi acton movie, starring Tom Cruise as an alien-fighting soldier who keeps getting killed and then repeating the last day of his life until he gets it right. You might think of it as Independence Groundhog Day. June 6

Writer-directors Phil Lord and Christopher Miller (Cloudy with a Chance of Meatballs, The Lego Movie) do sweet and subversively funny well, which is a hopeful sign for this sequel comedy in which Jonah Hill and Channing Tatum reprise their roles as undercover cops who go back to school. June 13

The story of doo-wop stars The Four Seasons goes from Tony Award-winning Broadway musical to a film by 83-year-old Clint Eastwood. That may seem like a strange choice for the director, but who knows better how to Walk Like A Man? June 20

This is the four-hundredth – sorry, that’s just the fourth – Transformers movie from maestro of mayhem Michael Bay. Mark Wahlberg heads up a new human cast interacting with bad and good giant robots from space. This is the first movie in the series to feature not just Autobots and Decepticons, but also Dinobots, who have been much missed. June 20

Dawn of the Planet of the Apes

Andy Serkis gets dressed up again as Caesar for this follow-up to the unexpectedly decent Rise of the Planet of the Apes, with Matt Reeves (Cloverfield, Let Me In) in the director’s chair and Gary Oldman and James Franco returning in human roles. July 11

Warner Bros. has a history of placing big films in mid-July (The Dark Knight, Inception, a couple of the Harry Potter movies), which bodes well for this latest offering from the intermittently visionary sibling team of Andy and Lana Wachowski (The Matrix). It may be the most original sci-fi flick of the summer: The Queen of the Universe is determined to get rid of a young Russian janitor (Mila Kunis), with Channing Tatum as the intergalactic assassin. July 18

The ancient kingdom of Thrace has been under-represented in the movies. Under the direction of Brett Ratner (Rush Hour), Dwayne Johnson wears a wig and plays Hercules, an army trainer for the King of Thrace who kicks ancient butt against weird costumed warriors. July 25 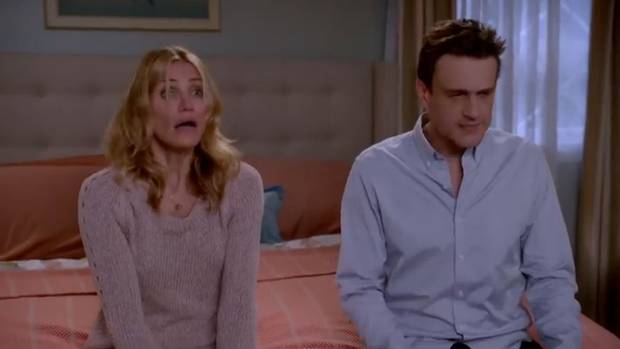 Jason Segel and Cameron Diaz play a long-married couple who discover someone has stolen the sex tape they made to spice up their marriage. Since neither of them is Katy Perry or Justin Bieber, it’s hard to see what the panic is about. On the hopeful side, director Jake Kasdan did give us Walk Hard: The Dewey Cox Story. July 25

Guardians of the Galaxy

Chadwick Boseman, who played Jackie Robinson in last year’s 42, takes on the mantle of the late James Brown, aka The Godfather of Soul, in this biopic directed by Tate Taylor (The Help). Viola Davis and Octavia Spencer play supporting roles, and Mick Jagger is part of the producing team. Aug. 1

The fourth TMNT film since 1990 has Jackass’s Johnny Knoxville as the best-known of the voice actors here (as Leonardo), and a human cast that includes Megan Fox, Will Arnett and Whoopi Goldberg. Aug. 8

She’s been busy (Her, Captain America, Under the Skin), but Scarlett Johansson found time to star in Luc Besson’s Taipei-set thriller as a sexy superheroine. Forced to work as a drug mule for the mob, Lucy is accidentally transformed by the drugs in her body into a genius who can absorb information instantly, move objects with her mind and completely disguise herself from her enemies simply by donning a black wig. Hey, no one said her enemies were geniuses. Aug 8

Phillip Noyce (Clear and Present Danger) directs this adaptation of this young adult, pre-Hunger Games novel in which an adolescent boy (Brenton Thwaites) learns from an elderly man (Jeff Bridges) that the society they live in is a whole lot less perfect than it seems. Bonus points for a cast that manages to include both Taylor Swift and Meryl Streep. Aug. 15

The steroid budget alone would finance most Sundance features, as every action-hero actor since the 1980s (Sly Stallone, Dolph Lundgren, Arnold Schwarzenegger, Harrison Ford, Jason Statham, Wesley Snipes, Jet Li) gets together here as a mercenary group taking on a ruthless arms dealer played by Mel Gibson. That raises the question: Must Mel now always be typecast as the bad guy? Aug. 15

Sin City: A Dame to Kill For

A sequel to Frank Miller’ 2005 exceedingly lurid neo-noir Sin City, it follows this summer’s dominant trend – a really over-stuffed cast: The roster here includes Jessica Alba, Lady Gaga, Ray Liotta, Josh Brolin, Joseph Gordon-Levitt, Bruce Willis and anyone else who isn’t in The Expendables or X-Men. And this, combining four stories in one, is co-directed by Robert Rodriguez and Miller. Aug. 22
Single Page
1 2 3Next