Year of the Carnivore

Let's state it as a global rule. With the possible exception of those unfortunates suffering from political ambition or otherwise plagued by zealotry, most red-blooded members of the human species are always up for a good sex comedy. Ergo, for filmmakers so inclined, a sizable and receptive audience eagerly awaits.

Alas, this rule does come with a teensy and, I'm afraid, unavoidable caveat: Any picture with a legitimate claim as a good sex comedy is obliged to be (a) sexy and (b) comic. If neither, then what's left? Apparently, Year of the Carnivore - it ain't steamy and it ain't funny. It is, however, home-grown.

Indeed, in these perceptive days when three qualifies as a trend, Canadiana appears to be minoring in the genre lately - Shortbus, Young People Fucking and now this. In the first flick on that proud list, Sook-Yin Lee shed her clothes on camera. Here, presumably attired, she retreats behind the lens to put her experience to use in the dual roles of writer and director. Say this for her script: It's as sketchy as a failed sitcom, yet with a plot that boasts more wayward tangents than a geometry text. A mathematician with a laugh-track might salvage the thing, but the rest of us are left to subtract the unamusing from the haphazard.

The non-amusement begins with our discovery that Sammy Smalls is, well, small. A diminutive 21-year-old, afflicted with a limp from a childhood dose of radiation treatments, Sammy (Cristin Milioti) works as a store detective in a grocery emporium, nabbing shoplifters and turning them over to her burly manager who, after taking the miscreants into a backroom, beats them to a bloody pulp. His reasoning: "This way there's no repeat offenders." Now that's a guy with a future in politics.

Soon enough, girl meets boy in the form of Eugene (Mark Rendall), a carrot-topped musician quick to lead the lass straight into his bed. Enter the impediment to romance: Sammy is sexually naive; what's more, she's ticklish, a combination clearly designed to leave her embarrassed and yet laughing too. Lucky kid - she's one up on us.

Turning back to Eugene, he retreats immediately into mere "friendship" mode, yet not without commending her tenacity in non-sexual matters: "You may be small but you're tough - you kicked cancer's ass." Hey, Don Cherry praising Saku Koivu couldn't have said it more eloquently. (As for what that implies about those who fail to kick cancer's ass, no matter - this is a comedy, isn't it?)

Certainly those tangents do, flying off hither and yon. Can I interest you in Sammy's asthmatic mom trapped in a bickering marriage, in Sammy's beloved dog lost somewhere in the pound, in Sammy's elderly Japanese mentor confined to a wheelchair, or in Sammy's best friend Sylvia, the smart dumb blonde, poised to trade in her day job handing out free wieners in Aisle 5 for an upgrade to (get ready for it) a career in molecular biology? Huh? My point exactly.

Okay, nothing steamy, nothing funny, but surely, as a sop to the red-blooded, there must be nudity. Sorry, not much, not even the gratuitous brand. However, amid this deadly vacuum, there is one lively performance and it comes from Milioti - she and her big brown eyes deserve better. Otherwise, dine out on Year of the Carnivore at your peril - it might just give you a taste for tofu. 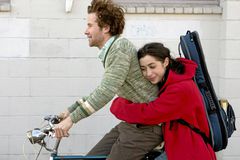