In the beginning, Helen Gurley Brown could not even say the word sex. At least not on U.S. television, not when she first appeared on talk shows to promote her 1962 female call to arms Sex and the Single Girl. And so, according to her biography, the author and editor who would go on to run Cosmopolitan magazine for 32 years and give birth to the controversial brand of female empowerment known as lipstick feminism, simply held up the book so TV viewers could read the title for themselves.

If Ms. Gurley Brown, who died Monday at the age of 90, did not create the sex-soaked contemporary North American media landscape, she used Cosmopolitan to scorch the earth on a monthly basis with frank talk about female independence, explicit sex tips and pneumatic cleavage spilling from the magazine's cover into every grocery store checkout line. Her influence was fraught with complications – many women found her emphasis on pleasing men sexually to be problematic, and her conception of women to be cartoonish – but she cleared a place where uncomfortable topics could find a home.

And she created the template for contemporary women's magazines that still holds today, even amid the revolutions and disruptions in publishing. "Fifty years later, Cosmopolitan still looks like Helen's magazine," noted Jennifer Scanlon, a professor of gender and women's studies at Bowdoin College and the author of the 2009 biography Bad Girls Go Everywhere: The Life of Helen Gurley Brown. (The title was a nod to the Cosmo editor's quip: "Good girls go to heaven; bad girls go everywhere.")

When she died, she was still listed as the editor-in-chief of the 64 international editions of Cosmopolitan she had helped launch, reaching more than 100 million readers.

Her advice to women came from hard-won personal experience. Without higher education, Ms. Gurley Brown spent her 20s bouncing from one menial job to another before landing at the Los Angeles advertising agency Foote Cone and Belding as the executive assistant to one of the partners. There, like a character from the hit cable series Mad Men, she leveraged the position into a job writing ads, eventually becoming one of the highest-paid copywriters on the West Coast.

In 1959, at age 37, she married Hollywood producer David Brown and three years later wrote Sex and the Single Girl. That led to her role at Cosmo, where she was an instant success but still had trouble breaking down barriers.

When Ms. Gurley Brown took the editor's chair, Hearst had almost nothing to lose: The magazine was in decline, with only $1.5-million in ad revenue and a circulation of 782,000. Her flair for punchy copy and compelling visuals – the very first Cosmo cover she produced featured a woman with a plunging neckline – was instantly successful. She courted controversy and buzz with stunts such as publishing a 1972 centerfold with an almost-nude Burt Reynolds and one in 1977 with Arnold Schwarzenegger.

By 1995, two years before she was ousted from the top job (to be replaced by Canadian-born editor Bonnie Fuller), revenues were $159-million.

"Other mainstream magazines which had been so strong all through the 20th century found themselves in the position that they had to address the issues Cosmo was addressing, and those included of course sex," Ms. Scanlon said. "But not just sex: financial independence and money, the world of work and women's self-esteem in relation to all those issues."

For some, her outlook was a counterpoint to Betty Friedan's The Feminine Mystique, published one year after Sex and the Single Girl.

"Everybody considers [Friedan's book] the advent of feminism: She woke up all these middle-class housewives who were educated but dejected in one way or another," Ms. Scanlon said.

Ms. Gurley Brown, though, was writing for "working girls, airline stewardesses – as we called them – retail clerks, waitresses. She was their cheerleader, she really believed in them, she argued for them, she instructed them to live their lives purposefully."

"She said, 'Look, this is how I see women behaving, regardless of what any of you have to say,'" Ms. Scanlon noted. "And in doing that she gained an enormous readership, and she created feminists of many young women." 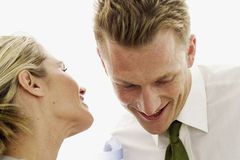