Imagine a guy so groovy that his pickle, stolen from his plate by his scheming little brother, might fetch a good price at auction. Or a dude so far out that a princess would fly into town just for a date with him.

Keith Partridge was the heartthrob lead singer of The Partridge Family, the fictional family band portrayed on the 1970s sitcom of the same name. The band, led by widowed mom Shirley Partridge, drove to gigs around the country in a painted school bus, and was managed by Reuben Kincaid, a man of questionable ethics.

While Shirley Jones, who played mom Shirley Partridge, was the big name going into the series, the show's breakout star was David Cassidy (Jones's stepson in real life with Jack Cassidy), who played Keith. David Cassidy, 67, died Tuesday of organ failure. He also announced this year that he had dementia.

I was raised on The Partridge Family, which premiered in 1970 and continued until 1974; it was also broadcast around the world. It was my first sitcom (if you don't count The Flintstones) and I preferred it to The Brady Bunch – which seemed to be an unusual opinion, at least among my peers. I found The Partridge Family a little more acerbic and quirky; the Partridges a little less perfect than the Bradys. I dug that there was a strong female character who wasn't a housewife, and I liked the music (I was young, in my defence, but even listening today I have to acknowledge how catchy some of those tunes were). I Think I Love You, their debut single, was a No. 1 hit and helped launch the show, Cassidy in particular, into the stratosphere.

With the exception of Jones and Cassidy, the cast members didn't sing; they were lip syncing to other people's voices. The original plan had been to hire an actor for the Keith role who would not do his own singing. Cassidy, however, had the musical chops. "The producers couldn't believe their luck when they found someone who could act and sing," according to The Partridge Family Annual 1975 (which a friend gave me years ago as a jokey gift). "David got the part – and a new pop sensation was about to hit the charts!"

Cassidy himself preferred harder rocking music, but on the strength of his Partridge Family fame, launched his own music career. He released solo albums, toured the world, and his image was ubiquitous – gracing the walls of teenage bedrooms everywhere and the covers of teen magazines ("Win David's love! Find out how!" promised one Tiger Beat cover).

"Almost overnight," (the annual again) "David Cassidy had become one of the big new superstar names of pop, with a fan following comparable to that of the Beatles, Marc Bolan and the Osmonds." (Bolan, who died in 1977, was lead singer of T. Rex.)

Sporting a shag haircut, long-collared shirts with many buttons undone, and sometimes a necklace of puka shells, Cassidy as Keith was a charmer. On the show, he was chased by teenaged girls; unwittingly attracted the affections of younger brother Danny's crush, Gloria Hickey; and romanced a date with Ravel's Bolero in his own bachelor pad next door to the Partridge house. If the show doesn't always hold up (although it surprisingly often does), Cassidy's performances do.

Unlike gazillions of others, I did not have a thing for Keith (or Cassidy), but I was a little obsessed with the show, buying those magazines whenever I could and collecting the bubble gum-scented cards. But with age and some more TV-watching experience, I recognized that Cassidy was actually really good in the show. He was more than a pretty face (and voice).

I saw him live in EFX in Las Vegas back in 1997. It was okay, as I recall, but I remember almost nothing from it. I can, however, cite plot lines in some detail from Partridge Family episodes I watched when I was 5. The stuff we grow up on is formative. So when a star we grow up watching or listening to dies, a part of our foundation, even a teeny bit, gets chipped away. It's something we become more familiar with as we age, even if it's a feeling we don't ever really know how to deal with. And this is something, I'm afraid, there is no cure for. 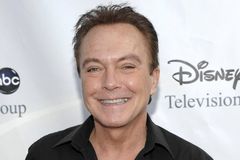