Let's start with this certainty: No one but Quentin Tarantino could possibly have made Inglourious Basterds . Now add another: No one but his most ardent fans will be entirely glad that Quentin Tarantino did make Inglourious Basterds . The rest of us are left to shake our heads, and perhaps wag our fingers, pondering this weird hybrid of a movie with an equally strange mix of emotions - wonder, regret, tedium, fleeing moments of admiration, extended patches of annoyance.

Ostensibly, he's turned out a Second World War flick, but right from the fable-like intimation of the opening crawl - "Once upon a time in Nazi-occupied France" - it's abundantly clear that we ain't watching the history channel. Instead, imposing his pulp fiction onto an era of tragic fact, Tarantino has twisted the war into a fantasy that is part revenge yarn, part gleeful propaganda and part wish-fulfilment - the wish being that movies weren't merely his personal obsession but the free world's literal saviour.

That's quite the concoction, yet, as it spills over 21/2 hours, there's surprisingly little froth in the brew and scant juice in the pulp. War reduced to pop entertainment should at least be easy to swallow, but this stuff keeps getting stuck in our craw. The trash that Tarantino used to elevate he now imitates.

Some of the imitation is dazzling, yet it's still mere mimicry. Consider the first, and best, of the film's five chapters. Rural France, 1941. An SS officer, Colonel Landa, is interrogating a local farmer about the whereabouts of a Jewish family. That's a stock tableau. But as the colonel, Christoph Waltz steals the scene (and later the entire picture) with a virtuoso display of unctuous politeness wedded to venal cunning. Speaking in German to his henchmen, in French to the farmer, then switching to English to keep everyone off balance, Waltz glides fluidly among the languages, just as the sequence moves seamlessly from menace to comedy and back again, with Tarantino superbly orchestrating the suspense.

Structurally, the episode is reminiscent of Samuel L. Jackson interrogating the college kids at the start of Pulp Fiction . However, that scene took stock characters and exploded the cliché; here, both the stereotypes and the cliché remain intact - skillfully adorned, but nothing more.

And that's as good as it gets. The second segment's revenge plot quickly degenerates into farce, occasionally threatening to plunge even deeper, into offensive farce. The slide begins with Brad Pitt's twitching mustache and twangy Southern drawl. He heads a lethal unit of Jewish commandos who, spreading fear wherever they roam, beat Nazi heads with baseball bats just before taking their scalps - like slugging Hank Greenberg in Geronimo's warpaint. Oh, it's enough to make the Fuhrer furious. Quick cut to a spitting-mad Adolf flapping his arms and spewing his venom. Clearly, the fellow needs to chill out, maybe take in an uplifting propaganda movie.

Well, wouldn't you just know it. Flash-forward to 1944, Paris, where the entire high command - Goebbels, Bormann, Goering, Hitler himself - have gathered for the premiere of, yes, an uplifting propaganda movie. This one stars the "German Sergeant York" (Daniel Bruhl), an actual war hero also in town for the screening. So are all the other principals - Pitt and the boys, the multilingual Landa, a Dietrich-like double agent (Diane Kruger) and the beautiful Jewish woman (Melanie Laurent) from the first chapter who, having escaped, just happens to be running the art deco theatre that the Nazis have chosen to house their premiere.

Oops, I forgot to mention my personal favourite: the British film critic assigned by London to pose as a German cineaste and infiltrate the gala. Finally. The snooty-critic-as-action-hero is a sadly neglected trope in the war movie genre.

Unfortunately, convening such a sizable crowd comes with a price - lots of awkward exposition that slows the picture to a crawl. Rhythm and pacing and snappy dialogue are Tarantino trademarks, but all three go for long disappearing acts amid this stylized fog of war. They intermittently return, most notably during another beautifully staged sequence in a Parisian bistro. Yet even there, when allied spies are rubbing shoulders with Nazi revellers, the payoff feels stale - just another Mexican standoff ripped from the frames of Reservoir Dogs . A director of many influences, Tarantino has always been a gifted thief, and he again steals liberally here - not least, alas, from himself.

When the climax comes, and that theatre filled with flammable film stock stands poised to do its explosive duty, the biggest pounding emanates from our puzzled heads. What in hell does any of this mean? Obviously, deception is a recurring theme - the duplicity found in the many stacked performances (actors playing characters disguised as other characters), the lies embedded in each of the multiple languages, and the calculated forgery that is cinema itself. Yet it's a theme that leads nowhere, that isn't bolted to any broader foundation of understanding.

In that sense, Inglourious Basterds reproduces the idea of a propaganda film, but has no idea of its own to sell. That might have been an interesting contradiction, since the peddling of ideas, and their attendant values, is the whole point of propaganda. If so, it's a contradiction Tarantino is unwilling or unable to explore. He's content instead to stick this fabricated yarn into his usual moral vacuum, where values don't exist and where the alleged villain of the piece, the SS colonel, is actually its most compelling figure. Sure, it's true that Satan is the most compelling figure in Paradise Lost , but Milton stops short of endorsing the guy. In his office as the high priest of pulp, Tarantino has no such compunction - whether Nazi butchers or Jewish Apaches, it's all the same good fun to him.

As for the misspelling in the title, he's called it "just an artistic stroke," although perhaps that's immodest. The title may be a small stroke; most everything that follows is a full hemorrhage. 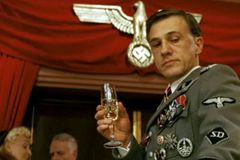