Linden Wolbert is one of the most famous professional mermaids working today.

When the L.A.-based "mermaid edutainer" quit her old job to pursue her passion in 2005, she says there were no other professionals on the market. Now, she says, "there is a mermaid movement happening. Absolutely."

Like sailors to a siren, we are drawn to the fishy femme. The mermaid biz isn't new: Many consider Australian Annette Kellerman, who was a Belle Époque performer, the pioneer of the industry. Throughout the decades, our interest in mer culture has come in waves, and all signs of late point to a fresh resurgence in fascination. It's been buzzed that Sofia Coppola is considering helming a live-action remake of The Little Mermaid, while British designer Bobby Abley's SS15 menswear collection will bring Ariel and Ursula to the streets of London this season.

But this time around, our fascination has gotten deeper. Mermaids are not merely something to be admired, it seems, but to emulate, despite our biological deficits. Mermaid conventions and classes are bubbling up everywhere.

In Canada, the latest venture is in Montreal. The AquaMermaid Academy, the first of its kind in the country, began its operations teaching merfitness classes in February. Owner Marielle Chartier Hénault, 24, was introduced to mermaid culture last November, when a friend sent her a YouTube video of a similar school in Germany.

Promoting her school as "something fun [and] different," it's marketed to wannabe mermaids between the ages of seven and 70 years old. "It's more than a fitness craze, it's a dream," Chartier Hénault says. "My first objective is to put sparkles in their eyes."

Backed by a soundtrack that's part calypso and part Disney songs, students are led through a warm-up and practice laps before getting a chance to don a colourful tail – a monofin wrapped in swimsuit fabric. People are drawn to her classes, Chartier Hénault says, because "adults want to learn technique and fitness, kids want the magic and fun. … I think that mermaids are mystical, magical."

The mermaid world is still a very small pond. Chartier Hénault initially stepped on a few fins after she used photos and texts of established mermaids to promote her business. Mermaid Linden Wolbert was one of them.

Wolbert's YouTube series, The Mermaid Minute, has racked up 17 million views and 28,000 subscribers, and come this spring, her signature monofins and children's kickboards will be sold at Toys R Us and Canadian Tire.

Driving the new surge of interest in mer culture, Wolbert believes, is the "omnipresent" mystery of the sea.

"We know more about the moon than we do about the ocean floor right here on our planet and we still discover a new species and find new and unfathomably crazy-looking creatures every day," she says. "There is magic in the water."

For people who want to take it to the next level, there is always the possibility of a mereer. The owner and founder of Canadian Mermaids, Atlantic Mermaids and Halifax Mermaids, Mermaid Raina estimates there are roughly 35 professional mermaids in Canada.

Mermaid Raina, who has a background in early childhood education, says professionals "tend to be individual" in their approach to the job, sometimes only working recreationally or seasonally. Raina works full-time with a group she has scouted and trained, and her agency helps mermaids get gigs and insurance. Her goal is to set professional mermaid standards for the industry (she has also written two books for those who want to dive in to the biz).

She thinks mermaids inspire this intense cultural fascination and the desire to be "part of that world" because it feels possible to physically embody a mythical creature when the tail is on. "If I put on fake fairy wings I won't fly, but if I put on a monofin and swim properly, I can clear the pool," she explains. "It's a costume, yes, but you feel like a mermaid."

Believed to have originated in Syria with Atargatis, a fertility goddess, the staple siren has a mythical representative in nearly every culture. Mermaids show up in Greek and Roman legends. The Inuit have Sedna, while the Japanese have Ningyo. The Yemaya, goddess of the living ocean, originates in Africa.

Two general schools of thought about these first-wave mermaids suggest she's either a feminine saviour – a lucky, protective water spirit – or a terribly bad omen that will lure you to death and cause shipwrecks.

"The mermaid captures a fundamental human longing to return to the sea," says Permaid, a Persian performance-art mermaid from Los Angeles known for her distinctive black S&M suit. "This could be seen as a return to the womb, or to the primordial beginning from the ocean."

Wired columnist Matt Simon notes that people used to believe there was a world parallel to ours existing underwater. "For me, the historical idea that every creature on land had its counterpart in the sea is based in part on trying to dissolve some of its mystery, [to figure out] what is in the deeps," Simon says by phone. Early mermaids were of the "cautionary tale" variety, he believes.

Nowadays, though, "It's more about fascination with the mystical. It's a cultural meme that pervades. … And there are also all kinds of [mermaid] communities you wouldn't have any idea existed."

Merfest 2015 in North Carolina, for example, saw more than 300 mermaids and mermen come celebrate their subculture in January. MerPalooza in Orlando and MerCon in Las Vegas have also served the North American pod in years past. Artisanal tailmakers, meanwhile, can fetch up to $6,000 a unit for their elaborate works, with waiting lists that are years long.

Mermaid fetishism isn't always about wanting to wear the tail. Every last mermaid interviewed for this feature had experiences dealing with "merverts" – the freaky fans who attempt to get too close to the fin.

Permaid believes the fantasy is wrapped up in the attraction to women who are sexy and unattainable. In her slick black costume, Permaid is a social-media sensation, posting shots on Instagram of herself posing in various crowded locales, such as public transit, a drugstore and a hotel pool. She's both very public and, with a full-body sheath that covers her from head to toe, seemingly unknowable – a cipher.

Like nearly all of the mermaids interviewed, there is an activist bent at the heart of her work. Her ultimate goal is to end SeaWorld theme parks, and bring attention to the aftermath of the BP oil spill in the Gulf of Mexico and the nuclear disaster at Fukushima in Japan.

"[Art] has operated as a vessel to bring awareness to issues I feel passionate about," Permaid explains. "I see a lot of pain and sadness created through the way humans interact with nature, [and] my interest is ending the suffering of sea life in captivity, as well as cleaning up the ocean.

"If I have to exploit myself to bring awareness to these causes, so be it."

Slowly inching the sparkly blue spandex unitard over my hips after a 72-hour research bender, the seriousness of this "tail initiation" was not lost on me: This would be a crucial step to becoming a mermaid.

If mermaids traditionally seek life beyond the conventional world, so, too, did the group of women at the AquaMermaid Academy who tailed-up with me instead of taking the regular aquasize class that was smirking at us from the other end of the pool.

For 65-year-old mermaid enthusiast Jennifer Maduro, the class was a "fantasy come true."

"It's like an escape – and will hopefully also be a good workout," Maduro says before we dive in. Claudelle Bilodeau, 25, was there to "vivre l'expérience d'une sirène" after receiving the trial class as a birthday present.

But perhaps too much of a fantasy to be a workout, and too much of a workout to be a fantasy, the illusion seemed to fade when we put on the tails – replaced with real efforts not to sink – and the women admitted afterwards they wished there had been more time for "free swim."

There is nothing quite like a foot cramp to remind us poor, unfortunate souls that we are mortal.

Lily James is breaking the spell of a fairy tale for today’s Cinderella
March 13, 2015 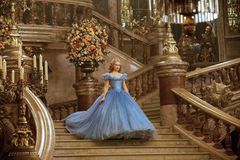 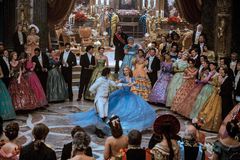 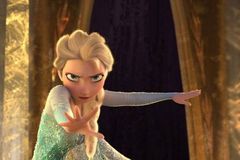