It's an exciting time for Vancouver artist Ken Lum. On Saturday, a retrospective of his 30-year career opens at the Vancouver Art Gallery. At home, there's a 10-week old baby - his first. And a year after its installation, Lum's Monument for East Vancouver - which reads "East Van" in cruciform - remains one of the most-discussed pieces of public art in the city.

A major retrospective at the Vancouver Art Gallery. Does that have special meaning for you, being a hometown boy?

Of course it does, because Vancouver is the source of all my reflections. It's not just a fountain of all my ideas, but it's actually constantly feeding back towards my art. I think I make the work I do because I think about this city a lot. So it's important to have an audience that knows the city too, is from the city.

You worked as a sign maker when you were young. It's easy to see how that's translated to your practice on the surface with your faux signage work, but how has it informed your work beyond that?

It probably informed my work on the level of theory, which is that we live in a world in which symbols conflate into signs. And symbols normally should be a lot deeper. There's a kind of confusion between surface and depth.

Do viewers ever think the signs are real?

Yes. They inhabit to a high degree plausible signs. Obviously if you look at them closely, at some point they can't be real. I'm interested in approximating art to non-art. I think that makes it more interesting. I like this idea of creating some moment of suspension in the viewer in respect to: is this really a sign? Is this really someone who's in crisis or is this not? Is this documentary? Is this not? And then at some point realizing: it's a work of art. The reason why I want that realization in the end is I think pure documentary or pure ready-made work has a limit, which is: well, the world is an endlessly fascinating place and that was one snapshot. And we tend to leave it on that slightly almost spectral level, and then we depart it. But I think if the viewer realizes it's a work of art, ultimately then that's an inducement for further reflection. At least that's my hope.

I still see people reacting to your Monument for East Vancouver.

I get so many e-mails about it, weekly. I used to get them daily. And I know that the online chats and the Flickr pages about it keep getting longer. And it's become kind of a mecca for all kinds of people. It's a marker in a city that has very few markers outside natural markers. Here's a marker of something that's not the mountains, not the sea and not some escarpment. And people are kind of shocked by that. I have to say I'm surprised by how vociferous the dialogue is around it. I think it's very healthy, but I'm surprised, and that pleases me. I never anticipated it to be that popular, to be honest.

You recently addressed city council in favour of building a new Vancouver art gallery with a cerebral speech addressing the evolution of art and the role globalization has played in that.

I tried a different tact. I just didn't want to talk about 'go for the gold,' 'we're a world class city,' 'put us on the map.' I'm not interested in any of that stuff. I think it's stupid.

There's been some resistance to the idea of the gallery moving. Why do you think that is?

Some people feel a kind of attachment bordering on fetish to this building. Also people in Vancouver like to develop habits, and even if they've never visited this gallery ever, they'll say, 'No, that's where the Vancouver Art Gallery belongs.'

A practical question: Is it difficult to install a major show like this when you're a sleep-deprived new father?

No. I was always a bit of an insomniac anyway. I used to be working away and then I'd look at my watch and realize oh, it's 2:40 a.m.

Do you think having a baby will make it challenging to produce the way you have?

No, I think maybe it will give it some sustenance and spur on creativity. But my life has changed a lot. I'm happy, elated. Certainly it changes priorities, right? The child's more important.

Ken Lum runs at the Vancouver Art Gallery until Sept. 25. 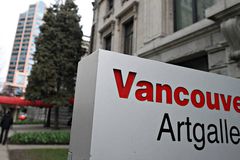