On the upside, in late May of 1969, here was the most famous couple in the world - the Beatle John Lennon and his wife Yoko Ono - nonchalantly sitting in their white honeymoon pyjamas talking peace and non-violence in a Montreal hotel room. I was one of the throng of reporters there - as The Globe's first full-time rock writer, I'd been invited by the pair and their press secretary Derek Taylor after helping them (in a hastily called strategy meeting) to settle on Montreal as the site of "the bed-in."

Peace and good vibes filled the flower-bedecked room, along with an ever-changing crowd of celebrity visitors - comedian Tom Smothers, psychedelic-drugs guru Timothy Leary, human-rights campaigner Dick Gregory, writer Nat Hentoff, singer Petula Clark and Rabbi Abraham Feinberg. On the walls were pitches for non-violence, scrawled in John's familiar doodles and handwriting. As the week progressed, lyrics also went up on the wall for his new anthem, Give Peace a Chance, which would be recorded on the final day of the couple's stay in Suite 1742 at the Queen Elizabeth Hotel.

On the downside, also present in that hotel room was one of the era's most despicable right-wing ranters, the hippie-hating Li'l Abner cartoonist Al Capp, doing his best to sabotage John Lennon's peace efforts by insulting his new wife and blatantly attempting to provoke the Beatle into punching out his lights, and thus besmirching the War Is Over (if you want it) campaign.

Capp had been invited by a CBC documentary producer as "balance" to the legion of left wingers drawn to the site of anti-war agitation. Accurately introducing himself as he sat down by the bed with the words, "I'm a dreadful Neanderthal fascist. How do you do," Capp sardonically congratulated Lennon and Ono on their Two Virgins album cover: "I think everybody owes it to the world to prove they have pubic hair. You've done it, and I tell you I applaud you for it."

Unlike the half-dozen of us gathered in the suite that afternoon, our rage approaching the let's-push-this-moron-out-the-window stage, John could clearly see that he was being set up and would not rise to the bait.

Other than Capp, everything about the Montreal bed-in was supremely upbeat and positive, almost naively so. (Odd aromas drifted through, but there were no arrests, despite the regular appearance of familiar faces, which we much later discovered in RCMP and FBI freedom of information documents to have been those of police tailing, taping and tapping our every move.)

Initially, the Lennons had flown to the Bahamas in the hope of conducting their second bed-in (after one in Amsterdam). But after finding the tourist hotel had jacked up its prices outrageously for their visit, the party, composed of John and Yoko, Yoko's daughter Kyoko, from her previous marriage to filmmaker Tony Cox, Taylor and two members of the Beatles' film crew, relocated to Toronto. Once immigration issues were sorted out allowing John - as a "desirable alien" - to stay on Canadian soil for the duration, Montreal was the obvious choice. (John had originally wanted the bed-in to take place in New York, but wasn't allowed into the United States due to his 1968 marijuana conviction; Montreal was a convenient destination for the U.S. media he wanted to entice.)

During a press conference at Toronto's King Edward Hotel I attended the day before the Montreal bed-in, John revealed: "The whole effect of our bed-ins has made people talk about peace. We're trying to interest young people in doing something about peace. But it must be done by non-violent means - otherwise there can only be chaos. We're saying to the young people - and they have always been the hippest ones - we're telling them to get the message across to the squares."

To which a reporter responded, "What about talking to the people who make the decisions, the power brokers?" Lennon just laughed: "Shit, talk? Talk about what? It doesn't happen like that. In the U.S., the government is too busy talking about how to keep me out. If I'm a joke, as they say, and not important, why don't they just let me in?"

In the summer of 1969, there was also talk of bed-ins in Russia ("I've heard it's easier to get into there than the U.S.," John quipped) and also Germany, Ireland and Tokyo. Once he had obtained a U.S. visa, John hoped to host bed-ins in New York and Washington.

At the Toronto airport en route to Montreal, I asked John if he was afraid of the U.S. political climate.

"Yes, we're really scared to go to the U.S. because people have become so violent - even our sort of people. Violence begets violence. We want to avoid it. But once we do get into the States, and can do our bed-ins in Washington and New York, I think we'll start to have some effect.

"I think it will take five to 10 years to change things. Yoko thinks five, I'm for 10. But we can't do it alone; we must have everybody's help."

London was never in the plan. "I'd have to take me prick out to get the attention of the English press," he said somewhat bitterly at the Toronto airport on his way to the Montreal bed-in.

"Now we do events outside [Britain] and the English press comes along to see them. We need the press very much to get our message across, so we have to go along with all sorts of bullshit from reporters. We answer the same questions over and over. Let me tell you that the Amsterdam gig wasn't the best way I know of having a honeymoon."

The Montreal experience was more laid-back. From their Montreal bed, John and Yoko devoted a good portion of their time to talking up the peace message on U.S. radio stations - to KSAN-FM's San Francisco Bay area listeners one day, and the next, to KPFA-FM in Berkeley, Calif., where the People's Park march was under way and Lennon was urging peaceful methods in it: "You can't change anything with violent means. Violence is what has kept mankind from getting together for centuries."

For the 40th anniversary of the Montreal bed-in, Yoko has launched her anti-war exhibition, Imagine: The Peace Ballad of John & Yoko, at the Montreal Museum of Fine Arts ( see sidebar for details and other 40th anniversary events). She is also to be awarded a prestigious Golden Lion for Lifetime Achievement on June 6 at this year's Venice Biennale contemporary art exhibition.

"I'm so happy that our dream is still alive and it's spreading and it's expanding," she said to me at the private opening of the exhibition earlier this spring. "I think that the whole world is realizing that peace isn't all that bad.

"I think that we are very lucky that we are still here 40 years later. When many of us couldn't make it. … We are very lucky." She indicated that as well as John, she was thinking particularly of Taylor, Leary, Rabbi Feinberg and photojournalist Gerry Deiter, who was covering the bed-in for Life magazine ( see sidebar for Toronto exhibition ).

Today, Yoko says it's the positive aspects of the bed-in she most vividly recalls. "Montreal was a place where John and I created a very important statement," she said. "We didn't think it was going to be that important at the time but it [made]the beds for our lives. I remember that when the journalists went home each day around 6 o'clock, John and I would turn around and look at the sky. It was a beautiful view. I always remember that.

"Without Montreal's vibrations and spirit around, Give Peace a Chance might not have been born. It was a work between John and I and our partnership with Montreal."

Writer Ritchie Yorke wrote about John and Yoko Lennon's peace activities in several Globe articles in the 1968-70 period. He also travelled the world as the International Peace Envoy for the War Is Over If You Want It peace campaign. He is researching a book about the campaign to be published on the 30th anniversary of John Lennon's death late next year. 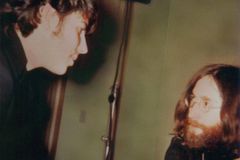 Bed-in: 40th anniversary events
May 22, 2009
Follow us on Twitter @globearts Opens in a new window
Report an error
Due to technical reasons, we have temporarily removed commenting from our articles. We hope to have this fixed soon. Thank you for your patience. If you are looking to give feedback on our new site, please send it along to feedback@globeandmail.com. If you want to write a letter to the editor, please forward to letters@globeandmail.com.
Comments