For architects, the Pritzker Architecture Prize is the world's most significant award, one that showers vast prestige and $100,000 on its laureates. More than 30 recipients, including Norman Foster, Alvaro Siza, Jean Nouvel and Peter Zumthor, have been blessed by the Pritzker (no Canadians have been honoured so far; Frank Gehry was an American citizen when he received the prize in 1989).

The winners are inarguably superstars and cobblers of exquisitely tuned volumes of space. But it has to be said that the Pritzker is sharply biased toward architecture produced by men. According to architecture blogger Conrad Newel, only 5.7 per cent of the Pritzker Prize-winners have been women.

This week, a relatively unknown architect, Eduardo Souto de Moura, 58, from northern Portugal, won the 2011 award. His work in Portugal is decently expressive (the Braga Stadium), boldly sculptural (the Paula Rego museum) and finely crafted (the conversion of the Santa Maria do Bouro convent into a luxury hotel). His is a wide-ranging, invigorating portfolio, and I have no quarrel with it.

But I was in Sao Paulo, Brazil, a global city of 20 million where masses of people still swarm the beloved civic architecture of Lina Bo Bardi, when I heard the news, and it was with a certain disappointment that I learned that the Pritzker had been awarded to another male European. Bo Bardi was an original - an architect, a woman - who emigrated from Italy to Brazil after falling in love with the promise of the subtropical country following the brutality of the Second World War.

During the 1960s, she designed the Sao Paulo Art Museum (MASP) as a piece of structural daring that hovers over an astonishing, epic public square. For Brazil, Bo Bardi delivered an instant architectural icon.

From across the street, where a dense jungle is captured within the Trianon Park, the MASP draws you like a magnet. But it was when I stood underneath the monumental floating box, which she referred to as "a moment of silence" along a boulevard defined by endless walls of office and residential towers, that I fully appreciated the nature of Bo Bardi's gift to Sao Paulo.

In a megacity increasingly divided between the rich and the poor, Bo Bardi's provision for a democratic agora at the MASP is a brilliant, enduring act of humanity. When it opened in 1968, the MASP museum rebranded Sao Paulo as a modern metropolis, in much the same way as did the huge, undulating Copan apartment building (1957) by famed Brazilian architect Oscar Niemeyer, whose work she much admired.

Her design prescience was astounding. The floating structure predates by nearly 40 years Will Alsop's own suspended manifesto in the form of the Sharp Centre for Design at the Ontario College of Art & Design in Toronto.

Though she is virtually an unknown outside of Brazil, her work is included by local architects within the cabal of the nation's most influential modernists: Niemeyer (Pritzer laureate, 1988) and Paulo Mendes da Rocha (Pritzer laureate, 2006). Bo Bardi's museum graces even coffee cups extensively retailed at the Sao Paulo airport.

A strong, independent thinker who once collaborated with the Italian communists and who saw the wartime destruction of her studio in Milan, Bo Bardi's reinvention of an abandoned factory district in the Pompeia neighbourhood of Sao Paulo is also a revelation, an ideal, seamless integration of history and modernism. It is one of the most popular of the country's sports and leisure centres (called SESC), which Bo Bardi envisioned as a "cultural citadel," and walking along the cobblestone alleys, it's easy to believe in the transformative power of architecture. Meandering pools of water run through one of the historic factories. Women sunbathe outdoors. Kids run along catwalks into the sports tower where indoor soccer fields are lit with windows designed like giant red squiggles.

How was Bo Bardi missed by the Pritzker? Like many other women practising architecture, she brilliantly embodied its ideals before her death in 1992: The purpose of the Pritzker is "to honour a living architect whose built work demonstrates a combination of those qualities of talent, vision and commitment, which has produced consistent and significant contributions to humanity and the built environment through the art of architecture."

And yet. Since Jay and Cindy Pritzker of the Chicago-based Hyatt Hotels empire established the award in 1978, it has gone almost exclusive to males, mostly Caucasians, with an emphasis on the European and American modernists, and the Japanese designers of the sublime such as Tadao Ando and Fumihiko Maki.

Two women have won: Superstar Zaha Hadid won in 2004; Kazuyo Sejima, who designed the New Museum of Contemporary Art in New York, won in 2010 with her partner, Ryue Nishizawa.

Bo Bardi taught at the Universidade de Sao Paulo, but, unlike many of the Pritzker laureates, she never taught at Harvard University's Graduate School of Design, one of those omnipotent badges of honour that impresses the Pritzker jury. Books on her work are difficult to find. Website entries are scarce.

I bought the coffee cup with the Bo Bardi museum on it at the Sao Paulo airport. I think I'll fill it with champagne and quietly toast the remarkable talent of the architect - the woman - the Pritzker juries allowed to get away. 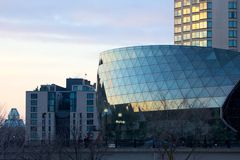 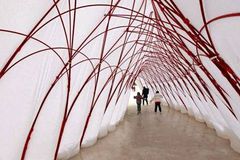 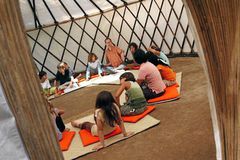