Just at the point when only professional obligation kept me from grabbing the remote and firmly pressing the off button, the Canadian Screen Awards finally produced A MOMENT.

Accepting the award for best actor in a comedy series, Paul Sun-Hyung Lee of Kim's Convenience spoke of how important it was that a national broadcaster air a show about an immigrant Korean family, a comedy that reveals how human similarities trump cultural differences. "I have never been more proud to be a Canadian than right now," he said.

It was the 50-minute mark and the show was desperately in need of things one could sincerely applaud. It was erratically hosted by the unfunny Howie Mandel, another of the Canadians-in-Hollywood whose supposed star quality the Academy of Canadian Cinema & Television feels is necessary to the CBC telecast, and it was lurching from the boring to the weird. Its many odd moments included Just for Laughs producer Gilbert Rozon telling a long-winded anecdote about how U.S. talent agencies had only booked big names for his comedy festival because they thought he was Jewish; film producer Sylvain Corbeil reading things from his phone because director Xavier Dolan could not be present to accept prizes for It's Only the End of the World, and comic Sean Cullen proving embarrassingly truthful when he told his co-presenter he didn't want the audience to have to sit through a bunch of weird stuff.

There was some genuine emotion from Tatiana Maslany accepting her first of two best actress prizes for her role in indie drama The Other Half; some genuine grace from Christopher Plummer modestly accepting his lifetime achievement award; and a heartfelt speech from members of the Tragically Hip for an honour that recognized the telecast of their farewell concert.

But that win was in a category – best performance in a variety or sketch comedy – that also included the Baroness von Sketch Show. Go figure.

Occasionally, the awards looked ready to embrace their oddball, small-time vibe: there was that lovely moment when Natasha Negovanlis, wearing a dress her mother sewed the night before, acknowledged "Most of you are wondering who the heck I am" after she beat out Murdoch Mysteries' Yannick Bisson for the fan-choice award. The answer is that she's the star of the LGBTQ web series Carmilla and the lesson is that you must never, ever underestimate the power of an Internet campaign.

But then Mandel would pop back in with his umpteenth unsavoury joke about winners getting STDs – short for screen, television, digital. Truth is, comedy series is the most competitive category in the sprawling screen awards and, in a country in which the daring Letterkenny beat out much cozier choices for that award, there are plenty of interesting talents who could be bringing this awkward local thing home. At one point, I caught Mandel handing the birthday card he was passing around the audience – he apparently just learned about Canada's 150th – to Steve Patterson of The Debaters. Get that guy up on stage. I have seen him host galas; he's great at it. Acknowledge the odd corners of Canadian creation, and turn the screen awards into something that feels genuine rather than lame.

Oh, and didn't we decide to call these things the Candys already? A name and a personality – it doesn't seem too much to ask. 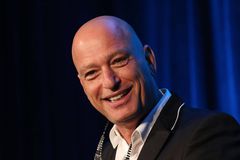 Christopher Plummer reflects on roots ahead of Canadian Screen Awards
March 7, 2017
Xavier Dolan, Orphan Black big winners at Canadian Screen Awards
March 12, 2017
Follow Kate Taylor on Twitter @thatkatetaylor
Report an error Editorial code of conduct
Due to technical reasons, we have temporarily removed commenting from our articles. We hope to have this fixed soon. Thank you for your patience. If you are looking to give feedback on our new site, please send it along to feedback@globeandmail.com. If you want to write a letter to the editor, please forward to letters@globeandmail.com.
Comments