You could make a hefty museum show about all the films, plays, novels, songs and other cultural works made in response to the 11-year rule and long afterburn of Baroness Margaret Thatcher. But a really thorough display would also have to include some of the pop-cultural figures that made her reign possible, starting with actor Peter Sellers.

It was Sellers who presented Thatcher and her future supporters with a figurehead for everything they deplored about British society, in the film comedy I'm All Right Jack. Sellers played Fred Kite, a complacent union steward, secure in his entitlements, opposed to all innovation. The movie came out in 1959, the same year Thatcher became an MP, and was a huge and enduring success. It seeded the public mind with the caricature of moribund unionism that Thatcher later used to crush the big British unions and remake the economy.

Likewise, Thatcher became her own caricature, of the hard-nosed, privatizing dogmatist. "There is no such thing as Society," she said in 1987, putting the seal on her role, celebrated in umpteen scathing songs and satires, as the politician most likely to replace your gran's old-age benefits with a poll tax.

Thatcher in the arts and popular culture is mostly a hate-filled, miserly figure, like Scrooge with all the power and no midnight conversion. She was so bad, the best you could hope for was her death, as foreseen in several songs (including Morrissey's Margaret on the Guillotine), a hit musical (Billy Elliot), and at least two London stage plays, one of which, in 2008, positioned her coffin at centre stage.

Thatcher riled British artists directly with deep cuts to cultural subsidies, based on an imagined rush of private largesse that either did not arrive or made arts groups more vulnerable. She presented herself as friendly to art, having studied piano as a girl and sung in a choir at Oxford, but she was no fan of modernism. She famously dismissed Francis Bacon as "that man who paints those dreadful pictures." She held up the musicals of Andrew Lloyd Webber as examples of successful contemporary British culture.

But it was her economic policies, her military adventure in the Falklands and her apparent support for private avarice over public welfare that put her in the shooting gallery for so many artists. Salman Rushdie, an active opponent, pilloried her in The Satanic Verses (1988) as Mrs. Torture and Maggie the Bitch. Alan Ayckbourn's play A Small Family Business (1987) satirized Thatcherite views on family and looking out for No. 1, just as the film Wall Street, released the same year, burlesqued Reaganite greed.

Artists who have responded to her favourably make up a small group. Novelist Anthony Burgess, writing in Vanity Fair in 1985, was awed by her "sexual aura" and "mythical image of authority." Philip Larkin, as a guest at 10 Downing Street, heard Thatcher misquote his poem Deceptions to his face, but declared later in a letter that he would "kiss the ground on which she walks." Iron Lady, the 2011 film that earned Meryl Streep an Oscar for best actress, softened the ex-PM's image by focusing on her dotage and skimming over her contentious years in power.

The last word, or gesture, may belong to Paul Kelleher, a Londoner who fulfilled Morrissey's guillotine dream in 2003 by lopping the head off a larger-than-life-sized marble statue of Thatcher. "I don't doubt the sincerity of your beliefs," said the judge who gave him three months in jail. "Many people share them." Many will go on sharing them, though we now have only effigies and memories to swing at. 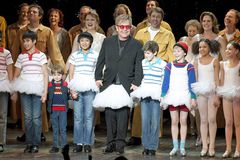