Judging from the evidence, the sound of happiness is 29 ukuleles playing I'd Do Anything from the musical Oliver! in a bar in east end Toronto. It's a Wednesday night at the Dominion, the pub where the Corktown Uke Jam has met each week for the past five years. Twenty-nine amateur ukulele players – more than 100 can turn out – are blissfully gazing at an overhead projection of chords and music, strumming, singing and (yes) beaming.

This is astonishing for many reasons: the economy, the situation in Ukraine, the mayor. But it is especially astonishing because we are talking about the ukulele: the underdog of instruments, the plinking laughingstock of the music world.

They're everywhere these days.

There's one in Her, the movie that won Spike Jonze an Oscar. Ukuleles pop up on TV whenever a hipster wants to convey the idea that he will happily behead a baby boomer, but also has a soul. Pearl Jam's Eddie Vedder released an album of ukulele songs.

Google ukulele, you get 10 million hits (a solo is so easy to upload, they should rename it UkeTube.). One of those hits, the Ukulele Orchestra of Great Britain's dainty version of Ennio Morricone's The Good, the Bad and the Ugly, has been downloaded more than six million times. Ukulele master Jake Shimabukuro's cover of George Harrison's While My Guitar Gently Weeps has been downloaded 13 million times.

The question is why. Is the rise of the ukulele the final nylon twang of Western music's decline into lax mediocrity – the American Idol-driven notion that anyone can be a musician? Or is the uke boom the tip of a new flowing freedom for all? Does our fresh love of a cheap, portable, simple instrument prove what George Bernard Shaw predicted – that hell will be full of amateur musicians?

These are questions musicians and ukulele enthusiasts argue about these days.

Ukuleles have been flying out of music stores. Brian LeBlanc, manager of the guitar section at Remenyi, a high-end store across from the Royal Conservatory of Music in downtown Toronto, calls it a "mania." Ukuleles outsell guitars three to one.

Five years ago, a good ukulele cost anywhere from $500 to $5,000. The Eddy Finn, the store's newest line – themed on Hawaiian surfing, made in China – starts at $79. Mr. LeBlanc sells three a day, and has unloaded another 600 to public schools, where the ukulele is replacing the mind-numbing recorder as the noisemaker of choice in compulsory music classes.

They're being played, too. Mathew Roberts, a classically trained double bass player and music teacher in Toronto, maintains "ukulele is making up 50 per cent of my students right now." They range from mid-20s (mostly female) hipsters to seniors staving off arthritis. TD Canada Trust even asked him "to do a corporate ukulele workshop."

"I think it's just that the ukulele is fun to play, it's really easy to play, it's cheap to buy, and it's portable," Mr. Roberts says. And, Mr. LeBlanc says, "with a ukulele there's nothing you can't play." His store sells a wide range of songbooks for ukuleles, including the Best of Metallica.

Historically, this is the ukulele's third bout of popularity. Introduced from Peru to Hawaii in 1879, the ukulele took off during the Depression, when Tin Pan Alley and the movies capitalized on its simple authenticity, and again in the surfing-obsessed 1950s. But by the 1970s, the electric guitar and Tiny Tim had reduced the instrument to a joke.

The current round of uke madness was spawned when the late Israel Kamakawiwo-ole's pared-down ukulele version of Over the Rainbow went platinum in 2005. The 2008 recession fuelled the rest of the revival.

Not everyone's a fan. Brian Katz, an adjunct professor of musical education at the University of Toronto and York University, sees the phoenician rise of the ukulele as more evidence of popular music's decline into "pared-down chords, in terms of where popular music is heading, harmonically. Not a lot of chord changes. Rhythm is the big thing." Compare Mr. Kamakawiwo-ole's Over the Rainbow to Keith Jarrett's piano version and you will hear what he means. "We're in this time when people think anyone can be a musician. … People just don't apply themselves the way they used to."

But the ukulele boom may answer a deeper, technology-related longing. Back at the Corktown Uke Jam, Andrée Boiselle, a 38-year-old associate professor at Osgoode Hall Law School, is strumming her way through a uked-down version of Billy Joel's Piano Man with jam founder Steve McNie. "This is an analog escape in a digital world," Mr. McNie, a former cellist, likes to say.

Ms. Boiselle agrees. A former lawyer in Montreal, she now spends her days deep diving through aboriginal land claims as a legal scholar. She laboured unsuccessfully at the piano for six years; the ukulele came as a revelation. "I think it's because of the way we're taught as a kid on the piano, with an eye to attaining a form of perfection. Which is so far from my experience of the ukulele. I would never have thought I could join a jam."

Now she does, weekly and willingly. "A lot of my communication at work is with a remote community that I can only access through various media," she explains. Her ukulele, on the other hand, "is the ability to make connections in a direct human way."

The antidote to digital life is a uke jam. The only requirement, Ms. Boiselle says, is that you be willing, "for an hour or two at a jam, to follow. People like me are quite aware that we have to be really good at what we do for a living. So it's a huge relief to not have to specialize and become part of an elite." Plink to that.

The surprising way this man is raising funds to fight cancer (hint: it involves a ukulele)
May 12, 2018 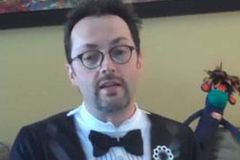 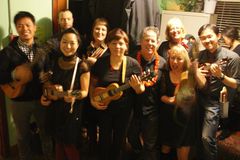