Rock music's world conqueror can be excused if he's a little down and distracted. Over white wine and linguine carbonara during the Toronto International Film Festival in September, Bono, with the guitarist Edge, was speaking about a film he'd had little to do with creatively – Davis Guggenheim's U2 documentary From the Sky Down – and the reissue of an album ( Achtung Baby) he and his band had made two decades ago. "Glum," he says, well, glumly, when asked about U2's mood early in the recording of that record in Berlin. "The whole period was really tough."

And with that, the man always in black got up from his seat, still limping slightly as a result of his surgically repaired back, and walked off in search of something to jazz the conversation – a portable music player for an exclusive listen to some of the previously unheard tracks from the Achtung Baby 20th anniversary package. In the singer's absence, Edge, much brighter-eyed, speaks about sounds – organic sounds, inaccuracies, chemistry and the right combination of technologies for making modern music. "With analog technology, depth is infinite," he says, leaning forward, his knit cap all I can see. "If you retain the organic shapes, your brain will continue perceiving depth that might not even be there. But the minute your mind sees a grid, that's the end of the interpretation."

It's interesting stuff, but I felt like I was in the middle of a Marshall McLuhan egghead fandango instead of rapping with two of the world's biggest – and in Bono's case, best – rock stars. "Perfection is deathly dull," Edge continues, "so unexciting."

Ten minutes later, Bono is slow dancing with himself to Heaven and Hell, from the original Achtung Baby sessions. "It's U2 like you've never heard us," he shouts, turning heads of those among the band's entourage in the private room at the swank Hazelton Hotel's One restaurant in Toronto's Yorkville. "It's a smooch," Bono grins, pleased with himself for arriving at just the right description for the doo-wop ballad. "Who would have thought?

In a hurry, the Dubliner in lilac-shaded glasses clicks onto another track before the first one even finishes. "I can't believe you did that," Edge says, rolling his eyes, dismayed at the song's interruption. "I'm just giving him some flavour," replies the singer, who then proceeds with a taste of the tribute CD of covers of Achtung Baby songs put out by the British music magazine Q. "We couldn't make this a pop song, but they have," he says, about the Killers' giant version of Ultraviolet (Light My Way). "We need him on the radio," Bono says about Brandon Flowers. "His voice!"

Bono is animated, singing harmony with the voices – sometimes his own – coming from the tiny speakers. "This is just better than our version," he surmises, listening to Nine Inch Nails' tense version of Zoo Station. More wine, more tracks and the interview is taking a decided upswing. The change of mood is dizzying – how in the world did we get here?

The film From the Sky Down is part of the Achtung Baby reissue package that includes early versions of the album tracks, rarities, remixes, b-sides and videos, not to mention a replica of Bono's wrap-around sunglasses. A few days before the interview with Edge and the activist-singer, I spoke with film director Guggenheim ( It Might Get Loud, An Inconvenient Truth) about how he got a forward-thinking band like U2 to participate in an archival project. "There's now this movement to do these anniversary movies, inspired by the Bruce Springsteen movie The Promise: The Making of Darkness on the Edge of Town and the [Rolling Stones'] Exile on Main Street reissue," he said. "But if the album is good, and the story is good, it's a good reason to make a movie. And for them, it's the most tumultuous curve on their trajectory."

Achtung Baby was recorded in Berlin and Dublin, in 1990 and 1991. On the last date of the 1989 Lovetown tour, Bono had told his audience at the Point Depot in Dublin that the band's first decade was complete. "Now we just have to go away and dream it all up again."

They did that, but not without difficulty. U2, like many rock bands, had always fought against outside influences. When it came time to follow 1987's groundbreaking, Grammy-winning The Joshua Tree and the derided, vainglorious concert documentary and live album Rattle and Hum from 1988, though, the battles were, for the first time, internal.

Seeking inspiration and a new sound, U2 along with Daniel Lanois and Brian Eno ventured to Hansa Tonstudios in Berlin, where Eno and David Bowie had recorded Low and Heroes, and Bowie and Iggy Pop had made The Idiot. The ghosts had left the building, though, and the Achtung Baby sessions were "terribly tormented," according to Bono, until the song One finally triggered the mood that inspired the album. "We weren't getting anywhere until One fell into our laps and suddenly we hit a groove," drummer Larry Mullen said at the time, with Bono adding: "Maybe 'great' is what happens when 'very good' gets tired."

The eventual album was grand and a revelation – "the sound of four men chopping down the Joshua Tree," according to Lanois – and served to rebrand the band. The music was trashy, electro-European, sexy, daring and danceable; the lyrical concerns were broken relationships, self-worth and identity. The record sold more than 18 million copies, spawned the outlandish Zoo TV tour and propelled the band to the place it sits today.

Now, after 2009's No Line on the Horizon album and the globe-circling 360° tour, the members of U2 find themselves back where they were 20 years ago: artistically restless.

"We weren't thinking about it at the beginning," explains Bono, when asked about the motivation behind the Achtung Baby reissue. "But I came away from [ From the Sky Down's debut screening]last night thinking, 'I think I know what this is all about.' "

What it's about is the question of U2's relevance and once again, reinvention. "I'm working it out in my head right now," says Bono, "but we're at a similar kind of impasse now as we were before Achtung Baby. Why would anyone need a U2 album," asks the 51-year-old, looking his age. "Everyone's got one."

Adds Edge: "There needs to be something really extraordinary and fresh and different to justify somebody buying a new U2 record. We don't think about our work as coming down from the mountaintop with a tablet of stone – 'Here's the next instalment.' "

With their 20-year-old music playing, the two speak about the future. Edge finds the situation "exciting," and Bono finds it freeing. "We're looking at club culture again, and we're also looking at punk rock," the singer says. "We don't know where we're going to go in the end, but we will lift every stone to see if we can find what's underneath."

Will it happen for them today, as it did two decades earlier? "I'd say the odds are against us, if I were a betting man," Bono ventures.

If I were a betting man, I'd say Bono was raising the stakes. As I get up to leave the table, he mentions a sound check at this year's Glastonbury Festival, where he had stepped back and listened to his band mates play Out of Control, from the band's debut album Boy in 1980. "It sounded amazing," he says. "It was radical." 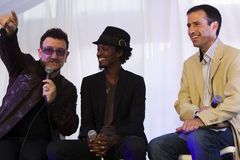 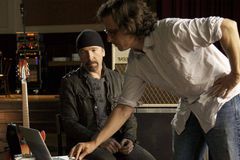