Art pop. In these days of Miley-Katy slam, bang and loudness, something done a little more artfully would be a relief. Lady Gaga, you got any? spaceship

I suppose she does. Artpop, the fourth full-length from the woman known to her family as Stefani Joanne Angelina Germanotta, is a jet-fuelled adventure of four-to-the-floor beats and decadent treats. It jitters, swirls and excites, but only blasts halfway there. The pulsating, EDM-influenced LP, leaked during what some have dubbed "music's worst week" because of slumping album sales, is built for the stage. My sense is that only when we see it there will we see its full conceit.

But not just any stage. It was reported this week that this space-aged Madonna and shape-shifting Bowie enthusiast plans to go stratospheric, with an audacious scheme to kick it zero-gravity style aboard a Virgin Galactic spaceflight in 2015. One small dance step for mankind, then.

According to Us Weekly magazine, the singer born a certain way will perform one song way up. It might be Venus, the super-sized ABBA-style liftoff that contains the indelicate line, "Uranus, don't you know my ass is famous."

The track – a disco mix of sex, astrology and ancient mythology – name-checks Aphrodite and mentions a clamshell bikini. No doubt Gaga's tour wardrobe specialists already have that little mollusk-to-order number teed up. The quaking G.U.Y. continues the sexy-mythic theme, with a reference to Himeros, who, according to lore, is the overachieving son of Aphrodite and the Greek god of love.

G.U.Y. stands for "girl under you," and one imagines Gaga's choreographer is busy at work on the song's live erotica possibilities as we speak. Gaga abandons the space-sex-goddess thing quickly on the hour-long odyssey, but there are other song pairings to be had. Donatella, an homage to the fashion designer and Versace heiress, is followed by Fashion!, an innocuous would-be anthem that equates "looking good" with "feeling fine," which is the way Fernando Lamas would have it.

The tune includes instructions to Gaga's tailor – "Now take it in, and turn me on; zip me up, it can't be wrong" – and, coupled with Donatella, virtually assures a runway segment in concert.

The glossy-glassy mess Mary Jane Holland – a reference to weed and a soft-narcotic capital – precedes Dope, a ballad that mentions Eric Clapton's Bell Bottom Blues and advocates addiction treatment for the sake of love. Melodramatic? Even Meatloaf thinks it's a bit much.

It all ends, as it must when it comes to fame seekers like Gaga, with a big round of Applause. It sounds like Estefan's Turn the Beat Around.

As Gaga sees it, her mission is not to turn the beat around, but to turn pop culture inside out, like a Warhol or a Madonna or a Bowie. "Pop culture was in art, now art's in pop – in me." With Artpop, she's not taking anything to the next level. Her aim is stellar, though, and she should at least get applause for that.

The week in music:

Top selling albums in Canada for the week ending Nov. 3: Arcade Fire's Reflektor, thanks to a savvy media blitz, debuts at No.1 on the Nielsen SoundScan chart. Another new arrival, Blue Rodeo's In Our Nature, comes in second, followed by Katy Perry's commercially disappointing Prism, Cher's Closer to the Truth (which bizarrely jumps from the 95th slot to the fourth) and Lorde's Pure Heroine.

Top single: Lorde's Royals tops the Billboard Hot 100's for the sixth consecutive week, holding off the challenges of new-coming tunes from Eminem (The Monster, featuring Rihanna, at No. 3) and One Direction (Story of My Life, No. 6). 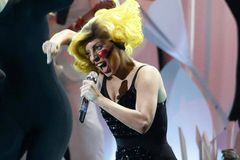 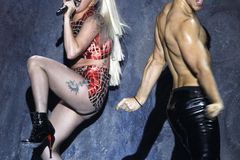