Sprightly, impish Sir Andrew Davis returned to his former orchestra Thursday night for a concert that was both unusual and satisfying. If there was a theme to the program, it was the relationship of music to the literary arts.

The concert began with the amazingly precocious Felix Mendelssohn's masterpiece, his overture to Shakespeare's A Midsummer Night's Dream, and ended with Richard Strauss's tone poem based on Cervantes's Don Quixote. In between, we had the amazingly precocious Canadian pianist Jan Lisiecki (17, the same age at which Mendelssohn wrote the Dream overture) performing the Schumann Piano Concerto.

Lisiecki has already made an enviable reputation for himself – one he will undoubtedly improve upon when he achieves an age that will get him out of high school – and he performed with a combination of vigour and tenderness on Thursday night.

Problem is, the Schumann concerto, for all its fame and familiarity, is a piece that is made up of bits and pieces of musical cloth, not easy to weave together into a comprehensive whole. Its first movement, intended as a stand-alone Fantasia, only morphed into a concerto four years later when its last two movements were added, and Schumann is notorious for the quicksilver scattering of his musical imagination. To make the concerto work, a steely musical mind is needed to unify its many musical moods.

Jan Lisiecki's mind isn't quite steely yet. Like many young people legitimately charmed and delighted by their own ability, Lisiecki seemed to be happiest when he was lavishing upon the concerto the greatest number of musical contrasts. At one moment, the Schumann sounded exactly like the languorous middle movement of the Rachmaninoff Second; a second later, thunderous double octaves right out of Tchaikovsky One; a moment after that, a sharply accented passage comfortably at home in the Beethoven First.

All this music was beautifully played, one must add, but the rapid alteration of moods only accentuated the wild nature of the Schumann concerto, rather than taming it. However, these cavils aside, the young man has confidence, technique and spirit to burn – and a major career surely ahead of him.

That Romantic quicksilver spirit also informed Richard Strauss's fabulous re-telling of the Quixote story, in his tone poem devoted to the Don. Strauss was reacting to many of the innovations, musical and orchestral, of Wagner in this late 19th-century extravaganza, and the piece is full of remarkably modern techniques, sounds, and connections. Strauss's Don Quixote is sort of like a comic book – a musical Comics Ilustrated of the Cervantes classic – with moment after moment of bright, beautifully conceived orchestral tableaux. Quixote against the windmills, Quixote fighting sheep, thinking them armies, Quixote at sea, Quixote in conversation with Sancho Panza.

It takes abandon and verve to pull off all these orchestral set pieces, and under Andrew Davis's direction, the TSO was more than up to the task. But Davis wasn't afraid to bring out the tender moments of resigned beauty that Strauss also wrote into the work, so the balance between boisterous tone painting and deep feeling was nicely achieved.

In this, Davis was aided by the TSO's principal cellist, Joseph Johnson, who "played" the musical part of the Don, and the orchestra's principal violist, Teng Li (and what a treasure she is) as Sancho Panza. Johnson gave us the full range of Quixote's emotions, from his bravado, to his mystification at the events befalling him, to the beautifully resigned and peaceful nature of his eventual passing. Teng Li's Panza was more biting, chirpy, and needling – the two of them playing off each other, and the orchestra, with real skill.

As to the Mendelssohn that began the concert, one can only bemoan the fact that the ultra-familarity of this music has unavoidably deafened us to the astonishing skill and beauty of its conception – it really is one of the 10 wonders of the classical musical world, and beautifully rendered by Davis and the TSO. Once again, the Toronto Symphony provided its loyal, and new, patrons with an evening worth remembering. 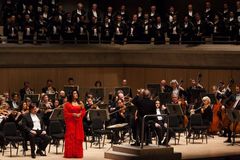 Anne-Sophie Mutter and the TSO: One goddess, heaven included
October 5, 2012 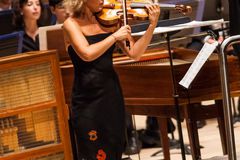 TSO’s buoyant spirit weighed down only by its cautious programming
September 19, 2012 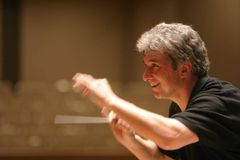