It was a year ago, at Montreal's Metropolis club. The prominent indie rock band Broken Social Scene had just finished a show that saw the unforeseeable appearance of Andy Kim, the Rock Me Gently singer from another era. It was the former pop star's first live appearance in his hometown in four decades; for the occasion, BSS front man Kevin Drew invited the sexagenarian on stage to sing one of his old songs.

After the concert, Kim was leaving the building when he heard the lead-out music: Andy Kim's Greatest Hits. Kim stopped dead in his tracks when he heard it, and then spotted Drew walking away from the venue. Kim caught up to him, but, so appreciative of Drew's gesture to play his music, he was speechless. Drew, some 30 years his junior, smiled, telling him: "It's all good, Andy. It's all good."

Drew and Kim are close; the former helps the latter with his annual December charity concert, taking place Wednesday in Toronto. The song in Montreal that Kim had joined in with Broken Social Scene last winter was How'd We Ever Get This Way, Kim's first U.S. hit from 1968. And that's a good question: How did Drew and Kim, an interesting juxtaposition of pals, ever get that way?

"I don't know what it is," Kim says of his friendship with Drew. "I can't explain the connection – I just go with it.

We're sitting in Drew's condo in Toronto. Reminiscing about the Montreal concert, and Drew's decision to spotlight him, Kim is getting misty at the thought of it. "I don't know, man," he says, voice breaking. "It's a tough thing to digest."

At that, Drew steps in. "This is why I hang out with him," he explains. "You can get to the core of him. He lets you go there."

It's not usual that interview subjects break down, but it happens. I remember one musician becoming emotional speaking about basement-dwelling music bloggers tapping out mean-spirited reviews – petty criticism that could cut straight to an artist's heart. That interview was with Drew.

Drew and Kim, whatever their superficial differences, are musical romantics. Drew, who co-founded the leading Canadian independent label Arts & Crafts, "designs his world to his dreams," according to Kim. Drew last month announced that Broken Social Scene had played its "final show," a tour-ender in Rio de Janeiro. The star singer Feist, a part-time member of the collective, has gone on record to say that BSS would be back soon enough. Drew, currently writing with Kim, isn't sure about that. "We had 10 great years," he says of the band's run. "I felt like everyone was tired of it, although everybody obviously honours it."

As for Kim, as a 16-year-old upstart he adventurously moved to New York to work with Brill Building songwriting legends Leiber and Stoller, Jeff Barry and Carole King. Years later he still refers to the music industry as a "playground."

He's had up-times (co-writing the Archies 1969 mega-hit Sugar Sugar) and he's had down ones (pitching Rock Me Gently to DJs door-to-door because no one was interested in the song originally). Through it all, an almost childlike wonder radiates from him. "There's nothing in my life that's ever been anything other than 'Is this great or what?' " he says. "It's all magic to me."

Drew is drawn to Kim's upbeat nature. "To be taught to be grateful and to enjoy what you're doing, I think it's a daily practice in today's day and age," Drew says. "Our notions go toward what we don't have and what's not working and what's wrong."

The cause is Julliette's Place, a shelter for abused women and their children. About attracting top-notch talent to perform and crowds to buy tickets, Kim prefers not to dissect the camaraderie. "Kindred spirits show up, and it's not for me to know why," he says. "I'm not smart enough to get it. But I'm smart enough to live it." 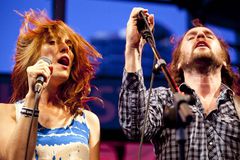 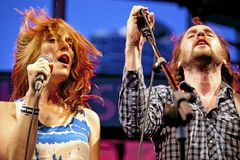 Broken Social Scene members debate new book on band's history
October 31, 2009
Follow Brad Wheeler on Twitter @BWheelerglobe
Report an error Editorial code of conduct
Due to technical reasons, we have temporarily removed commenting from our articles. We hope to have this fixed soon. Thank you for your patience. If you are looking to give feedback on our new site, please send it along to feedback@globeandmail.com. If you want to write a letter to the editor, please forward to letters@globeandmail.com.
Comments