Blame it on the new album or the marketing campaign for it, or on ticket prices and the popularity of rock music in 2017. Whatever the case, Arcade Fire is struggling to fill arenas on its North American tour.

The group has played to larger crowds in some cities, including Los Angeles and New York. It also added a second show at Toronto's Air Canada Centre (which takes place on Saturday).

At its Vancouver concert, frontman Win Butler acknowledged the attendance disparity: "We've played cities three times as big with half as many people, so this is really a thing of beauty for us," he told the crowd of 15,000.

So what led to playing some shows with the entire upper deck tarped off, and fans moving to fill the empty seats below? Reviews for the new album certainly didn't help. Released this past summer, Everything Now has been widely panned by critics, a career first for the onetime indie darlings. The marketing campaign to go along with it, which riffed off the album's exploration of consumerism and infinite content in the age of social media, was met with some disdain as well.

But Arcade Fire has long been a tongue-in-cheek group. That promotional blitz featured an ad for Creature Comfort cereal (a song off the new record), a slew of pranks (some fooled mainstream media and annoyed fans) and even a fake review of Everything Now on a website called Stereoyum (a twist on the real music publication Stereogum). In an interview with The Globe and Mail, Butler said: "I think the dream would be all five-star reviews and zero-star reviews."

While Arcade Fire may not have been selling out venues in 2014, the data available indicate the group has seen a notable drop in popularity while touring a high-end production with increased ticket prices.

"That might be a little bit of poor planning or poor forecast from the tour promoter," said Marie Connolly, an economics professor at Université du Québec à Montréal who has studied the concert industry.

The tour's promoter is industry giant Live Nation, which owns Ticketmaster. Late last month, Arcade Fire parted ways with Scott Rodger, the band's manager of 12 years who works for the Live Nation-affiliated Maverick Management. Both the band and Live Nation declined to comment for this story.

Some tickets have been offered at a lower price closer to show dates in order to fill seats on this tour. Lower-level seats for the group's St. Paul, Minn., performance were available directly via Ticketmaster for $23.50 (U.S.) plus service charges the day of the concert. Tickets for other dates could be found on discount site Groupon for 50-per-cent off face value.

Discounting tickets is a relatively common industry practice that's not often discussed, said Josh Baron, author of Ticket Masters: The Rise of the Concert Industry and How the Public Got Scalped. "The last thing you want to do is piss off your hard-core fans that supported you initially."

Kevin Morrow, former president of Live Nation's New York office, confirmed there are times when the strategy is utilized.

"The answer is yes, you do reduce prices at times," said Morrow, now the owner of Steel Wool Entertainment.

But just because some shows have thousands of empty seats doesn't necessarily mean a single concert or a tour is losing money, Morrow said. And when one promoter is overseeing an entire run, stronger markets can offset weaker ones (merchandise sales are also a major source of revenue but aren't captured in boxscore statistics).

Even if Arcade Fire wanted to play smaller venues in cities with lower demand, its in-the-round stage production would present a logistical challenge. There is often little middle-ground between 3,000-seat theatres and 15,000-seat arenas, Pollstar editor-in-chief Gary Bongiovanni said.

Arcade Fire made the leap from those theatres to larger venues in 2010, when it released the Grammy-winning The Suburbs. Reception to the current tour may prompt it to return to more intimate settings, experts say.

"It's better to start with a small venue and add a show than have a big venue you can't fill," said Pascal Courty, a University of Victoria economics professor who has done research on ticket sales. Arcade Fire may be able to make more money playing to a half-empty arena, he said, "but on the other hand, you don't want to be in the situation they are in." 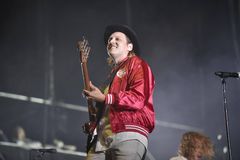