The impact of those trips, for Butler in particular, was immeasurable. "As a band, we try and dig into it together and find new ways of playing music together, and keeping it interesting for ourselves," says Butler, from New York, where the group played a couple of promotional shows last week. "For this record, the influence of Haiti and Jamaica was really transformative. It changed the way I think about music, and to be able to share that with the band was very powerful."

The resulting album is Reflektor, a giant, danceable thing of voodoo boogaloo, Bowie limberness and spiritual lyrical concerns. It was officially released today, though the band released a version on YouTube late last week after the material leaked onto the Internet.

Much has been made of the influence of album co-producer James Murphy, the DJ-producer and former LCD Soundsystem maestro. Murphy, a friend of Arcade Fire, has wanted to work with the band since before 2007's Neon Bible, but hasn't able to swing it because of other commitments. According to Butler, Murphy's perceived role has been exaggerated. "People have a funny idea of what production is," Butler explains. "We're pretty much a self-produced band, and James was just someone else in the room who we trusted."

One of the two tracks mixed by Murphy is Awful Noise (Oh Eurydice), a watery, ambient and uplifting number on the double-album's second and more restrained disc. "It's probably the least dance-y, least James Murphy-sounding song on the album," says Butler. "So, I think people would be surprised as to how that collaboration actually worked."

It wasn't Murphy who taught Arcade Fire to dance, then. It was, in fact, the carnival revellers of Port-au-Prince. Butler, who grew up in Houston with his bandmate and brother Will, was familiar with the Mardi Gras celebrations of New Orleans. But where that Fat Tuesday fandango leans hedonistic, the Carnival that Butler witnessed in Haiti was truly rooted in religion. "It's not just bacchanalia. It's a spiritual reason for people to dance, which makes a lot more sense to me than hanging out with a bunch of kids in Ibiza doing ecstasy."

The influence of the rara street-music festivities in Haiti manifested itself in a short promotional swing of semi-secret masquerade dance parties in Montreal, Brooklyn and Miami, headlined by a mysterious band called The Reflektors. We know them as Arcade Fire.

Those shows were part of the marketing plan for band's fourth album that included interactive and enigmatic videos, as well a campaign of strange graffiti showing up unexplained in various North American cities.

Those kind of fanciful tactics are nothing new to the band, signed to the North Carolina-based indie label Merge in the United States and the major Universal Music in Canada. None of the band's previous three albums sold a million copies, and there's no real guile at work when it comes to commercial ambitions, Butler maintains. "I can honestly say we've never as a band had a conversation about something being played on the radio. It's only at the end, when we're mastering the record, that we think 'oh, this song is seven and a half minutes long, but it seems like it should be the first single.'

"So, we've never let the logistics of the music industry enter into how we make music."

If logistics don't enter into the process, neither do expectations. The band has become increasingly less melodically minded since the release of its eponymous debut EP in 2003. Each record that followed received a smattering of criticism from fans not satisfied with the change in directions. "That doesn't affect us too much," says Butler.

Reflektor is Arcade Fire's most radical evolution, most evident in the album's calypso-dappled Here Comes the Night Time. Butler sings about the live-wire spirit of a beat that starts in your feet and goes to your head: "If you can't feel it, then the roots are dead."

Chuck Berry once vowed that he'd learn to dance if it took him all night and day. For Bowie, a fan of the band, all he needed was serious moonlight. And Arcade Fire? It took a decade and a trip of a lifetime. Let's dance, then – here comes the night time. 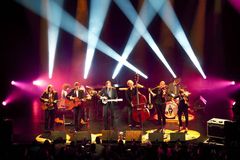