The musician Jim Bryson was in an Ottawa record store this week when he saw that an album by Jeremy Dutcher was in the “world music” bin. When he asked why a record by Dutcher, a member of Tobique First Nation in New Brunswick, would be categorized that way, the kid at the counter said that “anything even the slightest bit ethnic goes in there.”

The slightest bit ethnic? Bryson took the matter up with management. “I hope I didn’t get the kid fired,” Bryson told The Globe and Mail. “But, yeah, it took me by surprise.”

It probably shouldn’t have. Records by Joni Mitchell, Neil Young and Leonard Cohen – now that’s Canadian music, made by true-north-proud-and-free artists who spent most of their adult lives residing outside of this country. Music by Dutcher (who sings traditional songs in the Wolastoqiyik language), that’s weird, exotic – ethnic, some might say.

Last week saw the release of Creation Never Sleeps, Creation Never Dies: The Willie Dunn Anthology. The late Willie Dunn was a trail-blazing Canadian Indigenous singer, songwriter and award-winning documentary filmmaker, born in Montreal to a Mi’kmaq mother and a father who was a poet of either Scottish or Irish descent.

Where the record store kid slots the retrospective is anyone’s guess.

Dunn was given his unofficial middle name – Roha’tiio – by a Mohawk chief. It translates to “his voice is beautiful.” It was a baritone voice, similar to that of Johnny Cash, but steadier. When he sings The Ballad of Crowfoot, there’s a haunting, stoic, postapocalyptic air to the story telling: “They shoot the buffalo and kill the game, and send their preachers in to shame …”

One man’s apocalypse is another man’s genocide.

When talk turns to great protest singers, it’s Phil Ochs this and Bob Dylan that, with the predictable mention of the Ohio-singing Young – who carries a cigar store Indian around with him on tour and plays with a backing band called Crazy Horse.

The Willie Dunn Anthology self-bills as the “definitive overview of one of Canada’s unsung musical heroes,” with previously unreleased recordings, photos and interviews, plus red vinyl and liner notes done in a hippie-style newsletter.

The artistically assembled package comes from Seattle-based Light in the Attic Records, the label that shone a light on Dunn as one of the featured artists of the Grammy-nominated 2014 compilation Native North America (Vol. 1): Aboriginal Folk, Rock, and Country 1966–1985.

The liner notes tell of a broadly artistic life lived with an eloquent kind of activism. Adolescent Dunn was a Hank Williams enthusiast who dropped out of high school to join the Canadian Armed Forces. Serving in Africa in support of a United Nations peacekeeping initiative, he came across a Congolese teacher who questioned him about the welfare of Canada’s Indigenous peoples. Dunn came back to Canada, traded in his rifle for a guitar, and sought answers.

He played coffee houses in Montreal and Greenwich Village, and performed at Expo 67. His 1968 National Film Board short, The Ballad of Crowfoot, was about the 19th-century Blackfoot chief. The film, set to his song by the same name, might count as Canada’s first music video. It certainly was one of the earliest NFB features directed by an Indigenous filmmaker.

“It’s important for aboriginal people to tell their own stories,” Dunn would tell his fans, “because Hollywood has done enough.”

The new anthology collects Dunn’s work in that vein, including Louis Riel, a fiddled toe-tapper about the Métis leader; I Pity the Country, a finger-picked condemnation; and Crazy Horse, a Lightfootian folk-rock number that rhymed “mighty man” with “great Cheyenne” and faded out to powwow chants.

When Gord Downie used his 2016 album The Secret Path to tell the tragic story of 12-year-old Ojibwa boy Charlie Wenjack, the country was ready for it. It wasn’t as receptive in 1971 when Dunn released the song Charlie about the same boy, who died trying to flee a residential school in northwestern Ontario in 1966: “Little Charlie Wenjack, shuffling through the snow/ Movin’ down the railway line, tryin’ to make it home.”

Quoted in the anthology, Indigenous singer-songwriter Eric Landry says Dunn was “was our Leonard Cohen.” It’s past time for him to be all of ours, available in the bin marked truth to power. 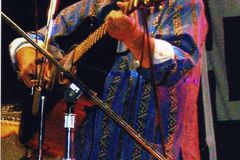