Unlike many musicians who require nudging to perform modern companies, 2019 Governor General's Performing Arts Awards recipient embraced contemporary music when she was 17.

When Louise Bessette takes her place among the recipients of the 2019 Governor General’s Performing Arts Awards, it will be to accept her Lifetime Artistic Achievement Award for excellence in classical music. And perhaps unofficially, Bessette will also be lauded for her skills in diplomatic relations between Canada’s living composers and their audiences worldwide. “I feel like this award is not only for me,” she says, “but also for all of the Canadian music that I played.” 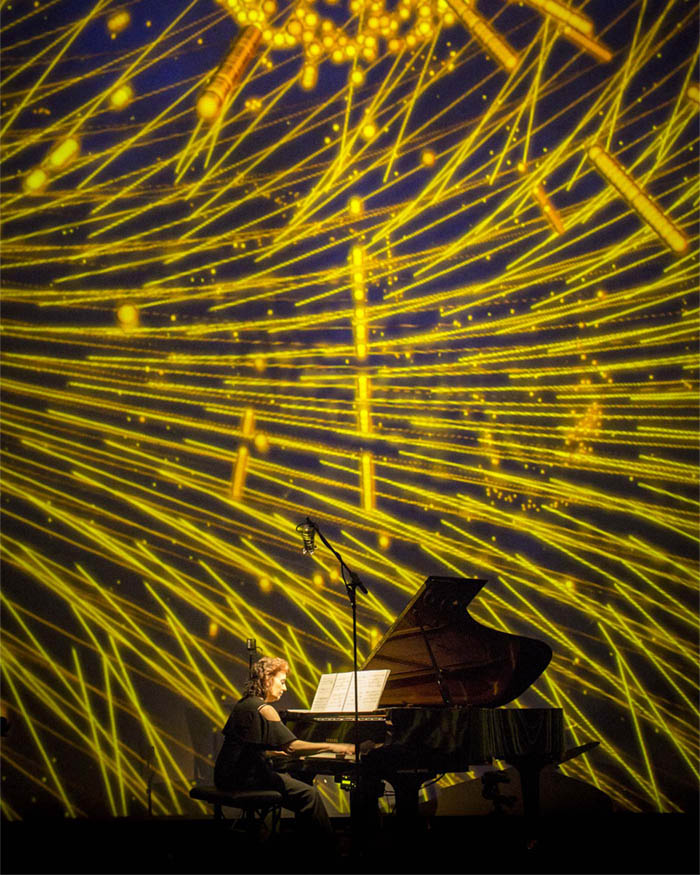 Louise Bessette is the recipient of the 2019 Governer General's Lifetime Artistic Achievement Award for excellence in classical music.

Bessette, the Montreal pianist who is already a member of the Order of Canada, an Officer of the National Order of Quebec, and a Canadian Music Centre Ambassador of Canadian Music, is in good company among her fellow GGPAA honourees. Among them are Mavis Staines, artistic director of the National Ballet School, actor and producer Lorraine Pintal, and Canadian favourites of stage and screen Colm Feore, Rick Mercer and Sandra Oh. The awards recognize excellence in dance, theatre, classical music, popular music, film and broadcasting, and the honourees are selected out of a pool of nominations by the general public. They are Canada’s highest nods to its artists, and to each recipient goes a cash award of $25,000, a commemorative medallion, and a well-deserved moment of public acknowledgement.

In selecting Bessette, the GGPAA Foundation was no doubt impressed by her unrelenting promotion of Canadian music. “I always liked to be in touch with composers,” she says of her career, which for more than 30 years has been tightly entwined with the creation and circulation of contemporary music from her home country. “It’s really a great experience to perform pieces when the composers are alive.”

Unlike many young pianists, who are not-so-gently nudged by their teachers toward contemporary music, Bessette needed no urging; it was early in her career when her attention turned to the music of living composers. She was just 17 when she discovered the music of Olivier Messiaen – the start of Bessette’s decades-long exploration of the composer, which reached a peak in the ambitious Automne Messiaen in 2008, celebrating his centenary with a series of concerts in Montreal.

And Bessette leapt at the chance to compete in the Eckhardt-Gramatté National Music Competition, the annual competition for Canadian and contemporary music, which she won in 1981. “It really spoke to me,” she recalls, Bessette’s “E-Gré” win was a catalyst for the decades she would spend as a champion for new music in her home country.

I know that contemporary music is not always easy for the audience, I'm very conscious of that.

With her international concert tours, impressively paced and showing no signs of slowing down, Bessette is an indispensable figure for the circulation of Canadian music around the globe. And her comprehensive discography is sometimes a concentrated celebration of a single composer – like her albums dedicated to the works of Gilles Tremblay, or François Dompierre – and elsewhere a gathering of varied composers, placing Canadian music by Alexina Louie and Jose Evangelista next to works by Joaquin Turina and John Cage.

And as a gesture of thanks for her ambassadorship, the composers in turn write for her. Quebec composer Serge Arcuri has written several works for Bessette to play, as has Argentine composer Raoul Sosa, with whom she studied piano. Bessette is a lover of tangos, and she asked Sosa to write one for her. “He wrote a huge tango, which he called Tango-Fantaisie, and he gave the dedication to his piece, ‘Für Louise,’” she recalls with a smile. “I was very moved.”

Even more than the balanced diet of traditional and contemporary music, the real trick to serving up new music is all in the execution, and strangely enough, the performer’s half of the process is often ignored. Bessette, with her tireless enthusiasm for translating a composer’s pages to a listener’s ear, is an artist who reminds us of the group effort that is the dissemination of new music. If a composer is the inventor, surely the performer is the salesperson.

“I work a lot on the interpretation, of course,” says Bessette, who is driven by a simple desire to faithfully illuminate a composer’s ideas. Her listeners notice, and come to see her after a concert to tell her so. “They tell me how they could feel how much I was involved in my interpretation, and it helped them to understand the music, to feel it and to accept it.”

Her playing may help with a listener’s acceptance of unfamiliar music, but Bessette hopes for more. She sees works by living composers as part of music’s evolution, an important larger picture about which we should be more eager to learn. “I just want to invite people to open their ears, open their hearts, and to be curious.”

In a gala celebration at Ottawa’s National Arts Centre on April 27, alongside her fellow honourees, Bessette will formally receive her Lifetime Artistic Achievement Award. “Of course, it’s not an achievement,” she says with Canadian humility. “I still have a lot to do.”