For rock fans of a certain age, Rush was the sound of a generation – and for Canadians in the 1970s and 1980s (and still), a point of pride. To think: one of the biggest rock bands in the world was formed in suburban Toronto and was making a giant, worldwide noise. Key to the sound – and success – of Rush was Neil Peart, a power-drummer and poetic lyricist who was a master with his sticks, and his pen.

On Friday, the band and his family announced that Mr. Peart had died on Jan. 7 in Santa Monica, Calif.

“It is with broken hearts and the deepest sadness that we must share the terrible news that on Tuesday our friend, soul brother and band mate of over 45 years, Neil, has lost his incredibly brave three and a half year battle with brain cancer,” began a statement from Rush. He was 67.

His death was mourned online by everyone from the Trailer Park Boys to the Foo Fighters’ Dave Grohl and Taylor Hawkins, who inducted Rush into the Rock and Roll Hall of Fame in 2013. “Neil Peart had the hands of God,” wrote Mr. Hawkins, the Foo Fighters’ drummer. “End of story.”

Mr. Peart was born on Sept. 12, 1952, in Hamilton. His proclivity for percussion was apparent early, when he started drumming with chopsticks on his sister’s playpen, according to Modern Drummer magazine, whose readers in 2014 ranked Mr. Peart third among the top 50 drummers of all time (behind John Bonham, an inspiration, and Buddy Rich, the subject of tribute albums Mr. Peart produced).

For his 13th birthday, Mr. Peart’s parents enrolled him in drum lessons. They told him if he stuck to the lessons and practised for a year, they would think about replacing his practice pads with actual drums. A year later, a shiny, red three-piece set was installed in the living room.

“His international reach was unparalleled,” said Andrew Mosker, president and chief executive officer of the National Music Centre, which has one of Mr. Peart’s old drum kits on display.

“When you have someone who is so committed to an art form at such a high level like Neil was as a drummer, and of course as a lyricist, it puts them in another league and they become timeless.”

Rush won 10 Junos, including the Humanitarian Award in 2015, and was nominated for seven Grammy Awards. In 1997, they became the first rock musicians to receive the Order of Canada.

“We’ve been saying for a long time – years – that this wasn’t a big deal,” Mr. Peart said during their Hall of Fame acceptance speech in Los Angeles. “Turns out, it kind of is.”

But Mr. Peart was beset with personal tragedy. In August, 1997, his daughter Selena Taylor, 19, was killed in a car accident driving to Toronto to begin university. His wife Jackie died of cancer the following June.

Mr. Peart got on his motorcycle and tried to deal with his grief. He wrote about it in his memoir Ghost Rider: Travels on the Healing Road, which became one of his publisher’s bestselling books.

“That speaks to how well he communicated that very particular tragedy that nonetheless resonates with so many people,” ECW Press senior editor Jen Knoch said. “He was able to really beautifully share all the messiness of that experience.”

He also published essays, memoirs and novels. “It wasn’t like that classic rock star who can’t write. He was a voracious reader and a careful thinker and avid letter writer,” said Ms. Knoch, who worked with Mr. Peart on travel memoirs Far and Away, Far and Near, and Far and Wide, and two novels with Kevin J. Anderson, Clockwork Angels and Clockwork Lives.

Ms. Knoch says Mr. Peart was a deep thinker, an intellectual writer, respectful to work with and dedicated. She recalls exchanging edits with him one year on Christmas Day.

“The thing that sticks with me is that he was so curious about the world,” she continues. “Even when he went through terrible tragedies. Part of the way he responded was by going out into the world.”

The December, 2015, issue of Drumhead Magazine published a farewell piece of sorts entitled “Neil Peart Reflects on 50 Years of Hitting Things with Sticks.”

In it, Mr. Peart wrote that he felt proud, grateful and satisfied with his career. “The reality is that my style of drumming is largely an athletic undertaking, and it does not pain me to realize that, like all athletes, there comes a time to … take yourself out of the game. I would much rather set it aside than face the predicament described in our song Losing It,” he wrote.

In that song, from the 1982 Signals album, an aging dancer and writer face their diminishing talents with pain and despair. “Some are born to move the world, to live their fantasies," the song goes. “But most of us just dream about the things we’d like to be. Sadder still to watch it die, than never to have known it.” 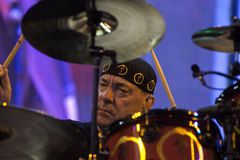 Neil Peart: Canada's answer to Shakespeare?
January 27, 2009
Follow Marsha Lederman on Twitter @marshalederman
Report an error Editorial code of conduct
Due to technical reasons, we have temporarily removed commenting from our articles. We hope to have this fixed soon. Thank you for your patience. If you are looking to give feedback on our new site, please send it along to feedback@globeandmail.com. If you want to write a letter to the editor, please forward to letters@globeandmail.com.
Comments