If it wasn’t clear already, a new video from Drake nails it down: Arguably the world’s most popular music artist would give it all up in a second just to be a jock.

The video for his just-out single Laugh Now Cry Later was shot at the Nike World Headquarters. He rolls up in a sports car and breaks into the sportswear facility at night and, among other frolics, plays one-on-one with all-star hoopster Kevin Durant.

Every kid has their candy store.

Though the new song, video and deeply committed product placement represent the hip-hop titan’s first significant single since Toosie Slide in April, it also represents the latest in a flurry of Drake-associated product that includes the mixtape Dark Lane Demo Tapes, released in May.

We’ve lost count of the songs the sociable superstar has been featured on this year, but his collaborations include tracks with DJ Khaled, DaBaby, Lil Yachty, Popcaan, Future and PartyNextDoor. Rumours have it that Drake will partner with Bruno Mars on a future single. On Instagram this week, the Torontonian posted that his follow-up album to 2018′s Scorpion would be called Certified Lover Boy, with no release date set yet.

Momentum may be an overrated concept in sports, but in the music industry, it is everything (unless you’re a surprise-album-releasing Taylor Swift).

The song Laugh Now Cry Later itself is so unadventurous and ho-hum Drake that it takes a back seat to the video. Against a sparse, mellow backdrop, he’s in Auto-Tuned crooner mode. The horns are noticeably fake; the beats, laid-back. He sings about a ghost town and says “baby” more times than Barry White and Justin Bieber combined.

While Drake sings, “I took a half and she took the whole thing, slow down, baby,” in the video a beautiful woman is opulently shown with dozens of shopping bags full of Nike merchandise. The gist is that women love to shop – such an evolved characterization.

The Nike World Headquarters where the video was shot is located in the bucolic suburbs of Portland, Ore. That city’s downtown, of course, was a recent place of George Floyd protests and police-fired tear gas. In the video, Drake rides Jet Skis with rapper Lil Durk (who is featured on the song), hits some baseballs and plays football with NFLers Odell Beckham Jr. and Marshawn Lynch.

Audaciously, an iconic photo of Muhammad Ali training in a swimming pool in 1961 is recreated for the video, with Drake in place of the boxer (then known as Cassius Clay). It’s either an homage to Ali or just another way for Drake to proclaim himself the greatest.

Speaking of walking in the footsteps of giants, the streamed-music king tries on what looks to be a famous white suit once worn by basketball superstar LeBron James.

These are all the dreams of Drake, who, suffering from either delusions of grandeur or an inferiority complex, needs to see himself as on a level with sports heroes. But, as Ali once said to an opponent, “If you even dream of beating me, you’d better wake up and apologize.”

For Drake, his walled Toronto compound, his court-side seat at Raptor games and the NBA championship ring he owns for his ambassadorial role with the team will never be enough. Ali is the Greatest. James is the King. And Drake? He’s just a pop star.

The Podcast Files: CBC’s This is not a Drake podcast is about Drake, but not really
June 17, 2020 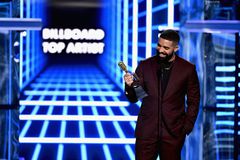 Mini-drone use on the rise to light up big concerts such as Celine Dion and Drake, but are they here to stay?
December 9, 2019 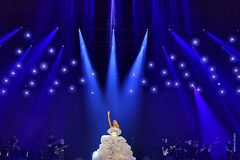