Music docs and biopics are booming, and it’s not just music fans and movie executives who are excited about the trend. Also clapping to the beat are music publishers and record labels, happy to rake in a new burst in revenue. Money-makers of late include the Motley Crue feature film The Dirt, the Freddie Mercury biopic Bohemian Rhapsody and the Elton John life-story musical Rocketman.

Coming next is the California folk-rock documentary Echo of Laurel Canyon (June 7), followed by Rolling Thunder Revue: A Bob Dylan Story, Martin Scorsese’s documentary about Dylan’s legendary 1975 tour that arrives on Netflix and in select theatres on June 12. After that, Yesterday, Danny Boyle’s comedy about a world where the Beatles have never existed, hits screens on June 28.

Nobody believes in yesterday more than Giles Martin, the son of the late Beatles producer George Martin and the music man behind the Rocketman score and soundtrack. He spoke to The Globe and Mail about lead actor Taron Egerton’s singing chops, Elton John’s approval and the influx of melodious movies.

Elton John was deeply involved with Rocketman, but did you work closely with him on the music?

We first met in November of 2017. He told me he was glad I was doing it and that I could do anything I wanted, as far as changing the arrangements. In August, 2018, he came to the set. They wanted me to take a couple of hours with him to go through the music I’d done so far. When I told him I wasn’t finished, Elton said in front of everybody, “Listen, I have complete trust in this man, and I’ll be happy to see the film when it’s done.” And that was it. In one way, it was wonderful that he completely trusted me. But in other way, what if I completely ruined it?

So, what was his verdict?

He phoned me in January, when he had heard the soundtrack. He said he loved it. He was incredibly kind.

Tell me about Taron Egerton. Were there any compromises made, given that he’s not a singer?

He’s a good singer. He could be a great singer. But he comes from a background of singing a song a certain way. It’s a modern way, using vowels a lot. The key to great singing is phrasing. It’s not about the notes. It’s more about the consonants than the vowels.

You were able to fix that?

Yes. I was worried that with Taron he would sing the song and say, “Okay, I’ve done this bit, now I’m going to makeup.” But he was actually happy to dig in and learn. He really pushed himself to do this. It was about getting the right balance between him singing like Elton, but not becoming a cover act. What was important was his own heart was in the song, and that he understood the song. That’s what we worked on the most.

Interpreting, rather than imitating?

Right. Also, actors take direction well. Too well at times. You can lose the nuance that way. But singers will often throw a glance through the control-room window when you tell them they’re not singing it right. With Taron, that wasn’t a question.

Were you thinking about the soundtrack album when you were developing the score?

No. The music complements the action in the scenes. It’s not about my interpretation of how Saturday Night’s Alright For Fighting should be. The result is that we got a pretty good soundtrack album. But that’s not the priority.

We’re seeing a lot of music biopics and documentaries. Why do you think that is?

People want to see artists on the big screen. It’s a different way of experiencing music. Everything’s available on your phone now. I think people want something added to that. A story enhances the music.

Any possibility of a Beatles biopic?

I think it would be quite hard to do. I wouldn’t know how to deal with that. The better known the people are, the harder it is for that fourth wall not to be broken quickly. Also, it’s also easier with solo artists. Bands have an internal dynamic. Band members will tell their own stories differently. And that’s okay. But only one script gets approved.

Dexter Fletcher basks in critics’ praise for Rocketman
May 30, 2019 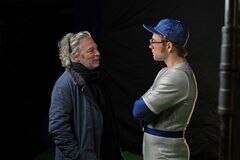 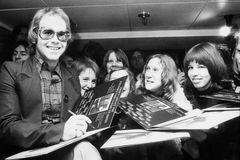