A Canadian has never won a Grammy Award for song of the year. Given the rising prominence of this country’s artists on the international scene, however, the chances of a songwriter with a Canadian passport snagging a golden gramophone seem almost inevitable. Consider that prior to 2017, less than a dozen Canadian songwriters had earned nominations in the top-song category. A Gordon Lightfoot here, a Nelly Furtado there and throw in a David Foster (in 1980, for Earth Wind & Fire’s After the Love Has Gone) for good measure.

Over the past three years, though, five songs with Canadian connections have been in contention for the trophy that honours the best sheet-music people. At this year’s Grammys (to be held at the Staples Center in Los Angeles on Feb. 10), Canuck contenders include Drake (one of the six co-writers credited for God’s Plan) and Shawn Mendes, who collaborated with three other writers (including Canadian Geoff Warburton) on the hit single In My Blood.

Nominations pour in for the 2019 Grammys, revealing a contrast to 2018′s testosterone jamboree

To find out what makes a hit song work, The Globe and Mail polled leading producers and songwriters to break down In My Blood, the lead single from Mendes’s self-titled third album. It’s a hit song of the dynamic, anthemic kind, with emotive lyrics about anxiety that suggest vulnerability and resilience. In My Blood is in our ears and on the charts, but how did it get there?

Jim Vallance (songwriter-producer known for collaborations with Bryan Adams and Aerosmith; record four Junos for composer of the year): “The secret to this song is its simplicity. The verse uses a repeated four-bar cycle: F, B-flat, D-minor, B-flat. One bar for each chord. Simple, but very effective.”

Tariq Hussain (Juno-nominated musician, author of Walrus magazine feature “How to Make a Hit Song in 2018”): “It’s built for a certain audience and a certain mode of transportation, the radio. A big part of the song’s appeal is Shawn’s delivery. He has an ability to capture a range of emotions, from intimate vulnerability to raucous intensity. The song is designed to suit that range.”

k-os (alt-hip-hop artist and three-time Juno winner): “What strikes me the most are the different parts. The acoustic introduction is typical Shawn Mendes, but the song keeps moving. It has dance verses and the chorus is shuffling pop-rock, almost like Kings of Leon.”

Different fans are attracted to different things. It could be the beat and a hummable chorus, or it could be the ideas conveyed lyrically.

Emm Gryner (Juno-nominated singer-songwriter, former member of David Bowie’s band): “The song falls into the modern pop-production category. So, what sets it apart for me are the lyrics. A lot of songs sound in a similar vein, but once you absorb these lyrics, there’s a vulnerability that draws you in. We’re in a time when men show that vulnerability. It’s seen as a sign of strength, not weakness. A song like In My Blood probably wouldn’t have worked 50 years ago.”

Like the Beatles, Joni Mitchell and Kris Kristofferson before him, Mendes uses the word “help” to solicit sympathy and concern.

Hussain: “If the opening line is ‘help me,’ you’re kind of forced to listen. You’re thinking, ‘Okay, what do I need to do for this person?’ They’re asking for my attention right away.”

k-os: “The Beatles’ song Help! was the first sign of where John Lennon was going as a songwriter. If you decide to say something that’s really meaningful, from your heart, in the middle of a pop-music conversation, people will recognize it. Who’s to say where Shawn is going to take his songwriting? I’m sure he’s feeling, as a young man, that he’s sometimes limited by the superficiality of success. But In My Blood took some guts. It’s raw feelings. And kids are more open to these conversations than they ever were before.”

Gryner: “I think fans, especially young women, will think, ‘Yes, I can help you, Shawn Mendes. I’ll be there in a jiffy.'”

The song’s rising, building progression makes it hard to ignore.

Robbie Lackritz (manager of Leslie Feist and producer-engineer nominated for 2019 Grammy for sound-board work on Bahamas’s album Earthtones): “Well-executed pop productions focus on commanding the attention of a listener. They repeat lyrical and melodic hooks while constantly shifting the parts underneath them. In My Blood exemplifies this, shifting its parts every 14 seconds five consecutive times to start the song. It moves in and out of half-time, has big reverbed tom drums, four-on-the-floor kick drums, and transitions between single and doubled acoustic guitars. It all happens underneath a variation of the same repeated lyrics (“Help me …”), all before the first chorus."

Vallance: “It’s hardly noticeable, but a new element – drums, bass, keyboard, guitar – is added in each four-bar cycle of the verse (approximately every 15 seconds). As a result, the verse slowly but steadily increases in volume and energy over 20 bars until it finally peaks on the downbeat of the chorus. U2 employed a similar arc on With Or Without You, a technique that’s traceable to Ravel’s Bolero, composed in 1928.”

Gryner: “It’s quite clever to plant the song’s title into the opening verse. They sneak it in, without giving away the full chorus. It’s a cool trick.”

The chorus (“It isn’t in my blood") is a statement of defiance, an arena-ready sing-along and a cathartic release of the tension built by the verses.

k-os: “Arena rock is built for arenas. A band like Kings of Leon had humble beginnings and graduated to a larger audience. Their songs took on different shapes when they began opening for U2. So, you have a chorus like the In My Blood chorus, where it just soars and the drums come in, you can throw that into the outer space of an arena and it comes back joyfully. There’s room in an arena to explore something like that.”

Vallance: “Shawn’s chorus uses the same chord progression as the verse (F, B-flat, D-minor, B-flat). This isn’t always advisable from a songwriting perspective – the ‘sameness’ can diminish the impact of the chorus – but in this case, the dynamics overwhelm any hint that the chords remain the same. Listen to Free Falling by Tom Petty. There’s almost zero difference between the verse and the chorus, other than Tom’s vocal jumping up an octave. Shawn takes things even further, pulling out all the stops. At the end of the chorus, the song does a sudden dynamic dip into the second verse, a loud-soft juxtaposition often used by producer Butch Vig in his recordings with Garbage and Nirvana.”

The song is 3½ minutes long. How do we feel when it’s over?

Lackritz: “Because the verse builds so much into the first chorus, the instinct of the listener is to assume it is the biggest moment that will occur in the song. But when subsequent choruses surprise the listener by being bigger, richer and even more memorable, there’s an added payoff for a song. So, while the easy-to-understand hook makes In My Blood memorable and relatable, it’s the way the song builds to choruses and then grows progressively bigger that keeps listeners pushing play again.”

Hussain: “It’s a fist in the air. It’s about not giving up, which is a universal emotion we can all identify with. It’s hard to get people to sing along with something they don’t universally agree with. But everyone can get behind this.”

Co-founder of Young Spirit on bringing 10 of its members to the Grammys
Subscriber content
February 4, 2019 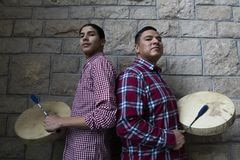 Nominations pour in for the 2019 Grammys, revealing a contrast to 2018′s testosterone jamboree
Subscriber content
December 7, 2018 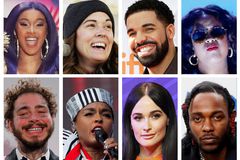 Analysis
Nice for what? Drake’s snubbing of the Junos says volumes about an awards body that never gets Canadian hip hop right
Subscriber content
January 30, 2019 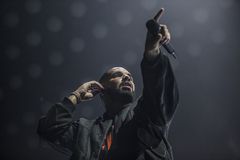