My Father and the Man in Black

Johnny Cash sang “I’ve been everywhere, man,” and one of the places he visited was London, Ont. It was there, in 1968, that he proposed marriage on stage to June Carter, and it is where Saul Holiff, Cash’s Canadian manager, will be honoured posthumously. As part of Jack Richardson London Music Week, Julie Chadwick (author of The Man Who Carried Cash) will interview Holiff’s son, Jonathan, whose 2012 documentary My Father and the Man in Black receives a screening. April 14, at the Jack Richardson Ballroom, London, Ont.

Some Hope for the Bastards

If there is no chance for the world’s bastards, isn’t any other optimism all but extraneous? From the Quebec dance-maker Frédérick Gravel comes an electric, pulsating modern piece for nine dancers. With Gravel’s all-in rock ’n’ roll aesthetic, the state of being human is investigated, with no citizenry left behind. April 21 and 22, Ottawa’s National Arts Centre.

It’s a little whodunit, and a little where-and-when-did-they-do-it. A darkly stylish murder mystery by Vancouver playwright Jovanni Sy is set in 1920s colonial Hong Kong, where a cross-cultural, cat-and-mouse crime yarn of detectives, double-crossing and taboo relationships unfolds. The play is co-produced by the Royal Manitoba Theatre Centre, Calgary’s Vertigo Theatre and B.C.’s Gateway Theatre. April 12 to 21, at the Gateway Theatre, Richmond, B.C.

Making its North American premiere is an immersive theatre experience based on the Academy Award-winning 1981 film about a diverse pair of British sprinters – one, the son of a Lithuanian Jew; the other, the offspring of a Scottish missionary – who seek to compete in the 1924 Paris Olympics. In this 2012 adaption by British playwright Mike Bartlett, a track runs through the audience and the music runs through your head. April 17 to May 5, at the Grand Theatre, London, Ont. 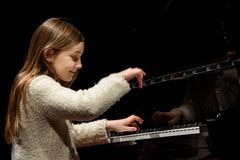 Soulpepper’s Gregory Prest on bullying, on stage and off
April 4, 2018