Brad Wheeler
Published May 11, 2021 Updated May 12, 2021
Comments
Text Size
Please log in to listen to this story. Also available in French and Mandarin. Log In Create Free Account

Helen Reddy was introducing the girl-group Fanny on her television show in the 1970s. “There aren’t too many female rock groups around,” the I Am Woman singer said. “I don’t know what the reason for that is.”

Didn’t she? Couldn’t she have intuited that because of sexism aspiring women rockers lacked role models and were discouraged from picking up instruments? And that maybe the ones who did form bands didn’t stick it out, having gotten tired of working within a misogynist music industry and being made to feel as if they were novelty acts?

“Hear me roar, in numbers too big to ignore,” Reddy sang on her feminist anthem, but, when it comes to all-female rock groups, the microscopic percentages are easy enough to sweep under the rug.

The Reddy clip is part of FANNY: The Right to Rock, a charismatic new documentary about three Filipina-American female musicians who rocked convincingly and melodically on five albums recorded from 1970 to ‘74.

Directed by Bobbi Jo Hart, the film (which moves on from last week’s Hot Docs Canadian International Documentary Festival in Toronto to this week’s DOXA Documentary Film Festival in Vancouver) chronicles a groovy Hollywood Hills scene. “A sorority with amps,” as it is described in the film.

The narrative of Fanny is that the band has been historically unappreciated – that they should have made it but just weren’t given a chance. While there’s some truth to that, it should be pointed out that Fanny wasn’t unknown. They were signed to a major label, toured with Steely Dan, received radio play (including the sexy 1974 single Butter Boy), were championed by David Bowie and nabbed major media coverage.

Fanny is the latest all-girl rock group to get the bio-doc treatment. Alison Ellwood’s showtime film The Go-Gos from 2020 celebrated the We Got The Beat hitmakers. Against the odds, all-female American bands such as Fanny, the Go-Go’s, the Runaways, Sleater-Kinney, Bikini Kill, L7 and the Bangles have been more or less applauded (though only the just-elected Go-Gos are deemed worthy of Rock and Roll Hall of Fame recognition).

Conversely, Canadian all-female rockers get far less attention. While current upstart the Beaches enjoys a major-label profile and the endorsement of Elton John, that band’s predecessors are obscure artifacts in comparison – fodder for the Where Are They Now? file.

Toronto post-punk outfit Fifth Column, for example, was groundbreakingly feminist and queer in the 1980s and nineties. Speaking in 2012 about her own band’s media attention, Bikini Kill’s riot grrrl icon Kathleen Hanna couldn’t believe Fifth Column wasn’t as acclaimed: “They were so much better than us.”

Still, Fifth Column, subject of Kevin Hegge’s 2012 documentary She Said Boom, had its day. Others, such as Vancouver’s Dee Dee and the Dishrags weren’t as fortunate.

Women rockers work in the shadows of men. Female Canadian bands toil in the shadows of their American counterparts. By the time we get to West Coast girl bands in Canada working in the shadow of the Toronto scene, it’s darker than Joan Jett’s wardrobe closet.

Dee Dee and the Dishrags, a trio formed in Victoria and named after Dee Dee Ramone, are considered to be one the first punk groups of note to emerge from the Vancouver scene of the late 1970s. Not only did they open up for the Clash’s North American debut at the Commodore in 1979, they had the moxie to close their set with the Clash’s London’s Burning.

Side stage, Joe Strummer and Co. applauded the audacity. Not everyone followed suit. Accepted by fellow punk artists, the Dishrags were less welcome in mainstream circles. They were asked to participate in a local battle of the bands concert, but as the opening act – not as competitors.

Other bands wouldn’t loan them their instruments. “There was this suspicion that we weren’t real musicians,” Dishrags guitarist-vocalist Jill Bain (known as Jade Blade in her punk days) told The Globe and Mail last week.

Bain, now an associate professor of art history and visual studies, remembered the catcalls. “It was all gender-based, disgusting stuff.”

Though unsung, the Dishrags are the subject of a documentary: Madame Dishrags, which screened at last year’s DOXA festival. It’s a micro-short, though – about three minutes long. Victoria director Carmen Pollard made it as part of Dancehalls, Deejays & Distortion, a 10-part series commissioned by the Knowledge Network.

“It took a lot to convince the network that the Dishrags story was worth telling,” director Pollard told me.

Asked the Reddy question about why all-female rockers are less renowned than their male equivalents, Pollard didn’t hesitate in answering: “It’s sexism, right?”

You bet your Fanny it is. 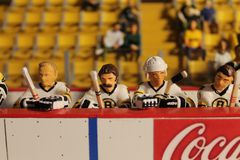