Fans of the American violinist Joshua Bell will arrive next week to Ottawa’s Southam Hall and Roy Thomson Hall in Toronto to see and hear the virtuoso work with Mendelssohn’s best E-minor ideas. And no doubt the audience will stick around to witness the National Arts Centre Orchestra (NACO) present Debussy’s sea-faring showpiece La mer. Intertwined within the established pieces, though, potent lesser-known works are also featured: French composer Lili Boulanger’s sorrowful 1918 composition D’un Soir Triste (Of a Sad Evening) and Canadian composer Jocelyn Morlock’s My Name Is Amanda Todd, an inspirational piece on the life and death of a 15-year-old native of Port Coquitlam, B.C. who, in 2012, took her own life, the victim of online abuse and high-school bullying.

The latter piece was commissioned by the NACO as one of the four works that made up its immersive symphonic endeavour Life Reflected, a suite of musical portraits showcasing four Canadian women, including Amanda, author Alice Munro, astronaut Roberta Bondar, the Mi’kmaq poet Rita Joe. Two years after the multimedia Canada 150 production toured the country in 2017, Life Reflected hit Europe in celebration of NACO’s 50th anniversary.

Seeing My Name is Amanda Todd as part of an extravaganza mounting was “overwhelming” for Morlock, a native of Manitoba now based in Vancouver. Before her death, Todd posted a poignant video on YouTube in which she used flash cards to speak out against bullying and her story of being blackmailed. Seeing Todd’s words projected on stage as her piece moved to a climax was “shocking,” Morlock says. “But in a good way.”

A week ago, My Name is Amanda Todd was presented by the Edmonton Symphony Orchestra in a program that included works by the illustrious Wolfgang Amadeus Mozart and Edward Elgar, nothing if not a man of Pomp and Circumstance. In Ottawa and Toronto, Morlock’s composition gets high exposure owing to the appearance of the charismatic violinist Bell, whose 300-year-old Stradivarius would easily have met the standards of Mendelssohn.

"Josh is part of our family,” London-born NACO music director and conductor Alexander Shelley says of the violinist, known to be a champion of new works. Bell previously collaborated on the NACO commission The Man With The Violin, which was inspired by a children’s book based on a Washington Post experiment in 2007 that had the world-renowned Bell anonymously working away at his multimillion-dollar instrument in a Washington subway. Standing next to a transit-system trash basket instead of in a hall named Carnegie, Bell was just another two-bit busker to oblivious rush-hour crowds. He made $32.17 from passersby. “Context,” Post writer Gene Weingarten concluded, “matters.”

Bringing in Bell (or, for example, star Venezuelan pianist Gabriela Montero, another friend of the NACO) allows Shelley flexibility in his programming. “Josh has a big personality and his shows are events,” says Shelley, speaking from Edmonton. “If we didn’t have him as a draw, we’d be more obligated to offer pieces that jump off the page as something audiences would recognize."

In other words, roll out the Tchaikovsky and Beethoven; leave out the Boulanger and Morlock.

For the Toronto and Ottawa concerts, My Name Is Amanda Todd will be presented without any multimedia component. Asked about the reactions the accessible, affecting piece has gotten, Shelley says many people came to him after a performance in tears: “I think because they found it so beautiful as an expression of who this young girl was."

On the other hand, Shelley had a member of his team tell him once that she couldn’t get on board with the piece because she couldn’t find a “redemptive part of the story.”

The composer’s response? “The message is one of hope and empathy, not of redemption,” Morlock says. “Those are two different things. I’m not sure where redemption would even fit in here. Who is being redeemed?”

Once an artist puts their art out into the world, they no longer control the meaning of the piece, whether it be a film, sculpture or an emotional, topical Juno-winning piece for large ensembles. “My Name Is Amanda Todd was designed to be part of a conversation, and I’ll leave it up to the audiences as to how they respond to it," Shelley says. “Because of the story, it will elicit strong responses.”

Morlock says she believes that, musically, the piece “stands up well for itself,” and that Todd’s story will resonate most with people who’d had their own struggles with bullying, or mental wellness, or had lost someone to suicide, or who worried about their own kids as they navigated the terrifying world of adolescence. “It is impossible for a composer to know what a listener will take from a piece," she says. “All you can hope is that it’s given proper context and a great performance. People will react to it as they will."

Jocelyn Morlock’s My Name is Amanda Todd will be performed by the National Arts Centre Orchestra in program featuring soloist Joshua Bell, at Ottawa’s Southam Hall on Feb. 5, and Toronto’s Roy Thomson Hall on Feb. 6. 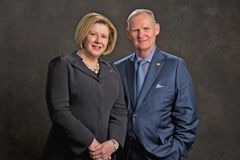