Hopes in the music industry that the new year would be any different than the last one were quickly dashed with the announcement this week that the 2021 Grammys, originally scheduled for Jan. 31, were postponed to March 14 because of coronavirus-related health concerns in California.

So, another year of planning tentatively. And, most likely, another year of major artists dropping albums with little or no advance notice. If it worked for Taylor Swift – twice – the strategy must be sound, right?

Any Canadian album preview in the last year or so has promised new music from hip-hop titan Drake. This round-up will be no different; a social media dispatch last fall indicates that the record is due this month, no specified date.

Other artists have been more definite with their plans. New albums by rising singer-songwriter star Tamara Lindeman (a.ka. the Weather Station), comeback hopeful Robin Thicke and 2020 Juno winner Dominique Fils-Aimé and others are a sure thing. Maybe.

The song and high-budget video for his single Laugh Now Cry Later in August showed Drake at his boastful-yet-self-deprecating best. The breezy, brassy track was a stand-in for an album Drake had earlier promised to release in “summer 2020.” Chalk up the postponement to the pandemic, or better yet, to delayed gratification. Certified lover boy, remember.

Newly signed to the American label Fat Possum, the Toronto artist Tamara Lindeman is positioned as a 2021 breakout candidate. Her new album is preceded by singles Robber and Atlantic, which reveal a continuing evolution from a mild-mannered folkie to a singer-songwriter whose uneasy confessions are now carried by insistent indie-rock rhythms and jazzy woodwind moments. Ignorance is due Feb. 5.

Some know Toronto’s Mustafa Ahmed by his former moniker Mustafa the Poet. He was the hometown poet laureate for the 2015 Pan Am Games. Others have spotted his name listed on the co-writer credits to songs by Camila Cabello, the Weeknd and, on their 2020 duet Monster, Shawn Mendes and Justin Bieber. Mustafa has now dropped “the poet” from his name and is set to step out from the backgrounds of others to release a debut album expected out this month. Singles Air Forces and Stay Alive foreshadow a smoothly crooned adventure in neo soul.

“Taking over the same old kingdom, building empires made of freedom … ain’t no stopping now, because we know what we gotta do.” The elegantly adamant lead single Love Take Over from Dominique Fils-Aimé's forthcoming album is a trumpet-trilled feminist manifesto. It’s also a signal that while Three Little Words concludes the Quebec artist’s album trilogy that explores the roots of African-American musical culture, she has only just begun a career of socially conscious and historically aware musical expressions.

Robin Thicke: On Earth, and in Heaven

The album trailer for the humbled former hitmaker’s upcoming album is a 60-second sprint through his ups, downs and deepest misfortunes. Included are references to a highly publicized divorce and the deaths of his father (Alan Thicke, in 2016) and his mentor (Andre Harrell, last year). The short clip closes with the Blurred Lines singer crooning the words “lucky star,” an indication that he’s in a reflective, upbeat mood rather than a wallowing one. “This music is the sunshine coming out after the rain,” Thicke said in a recent press statement. On Earth, and in Heaven, his first full-length album in more than six years, is due Feb. 12.

One of the tracks off the latest album from the jazzy alt-pop adventurists Bernice is It’s Me, Robin. The song is a luminous expression of existentialism and synthesized saxophone from Robin Dann, the soft-voiced ringleader of a group of Toronto collaborators who have worked, together and apart, with Martha Wainwright, Andy Shauf, Lido Pimienta, Bahamas, Beverly Glenn-Copeland and others. Eau de Bonjourno is set for a March 5th release on the hip Canadian indie label Telephone Explosion.

Specialists in hazy, magisterial space rock and declarative album tittles, the veteran Montreal band recently previewed its latest album (out Jan. 29) with the single Feuds and Guns. It’s a fine harbinger of the euphoric psychedelia to come.

Rhye is the Juno Award-winning project of feathery synth enthusiast Michael Milosh. Given that four singles from his forthcoming album have been released already, we’re about a third of the way to Home (out Jan. 22). Dark Rain and Come in Closer swirl at a disco ball’s mellowest setting; Helpless and Beautiful are yacht rock for the chill hours.

Speaking last fall to veteran producer Rick Rubin on the podcast Broken Record, Arcade Fire’s chief conceptualist Win Butler said he’s spent the COVID-19 lockdown writing “two or three” albums worth of music, and that the band expected to head to Texas to make its next record. That was supposed to happen in November. Stayed tuned.

If a new Arcade Fire album is deeply unconfirmed, two of the band’s members do have something on the books for 2021. The band’s Sarah Neufeld and Richard Reed Parry are part of Montreal’s Bell Orchestre, an experimental instrumental collective that created its forthcoming one-track album almost entirely from a single improvisational session. A just-out video showcases the exuberant V: Movement, described in a press release as the album’s “most anthemic and explosive segment.” Set for a March 5 release, the LP is called House Music. Isn’t it all these days, house music?

Dr. Dre says he will be ‘back home soon’ after receiving treatment for reported brain aneurysm
January 6, 2021 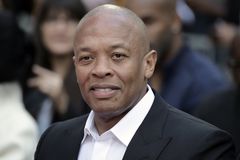 Neil Young sells rights to half of his songbook to investment firm
January 6, 2021 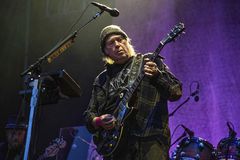 ‘Livestream’ may not always mean ‘live,’ but it has to be a good show
Subscriber content
January 7, 2021 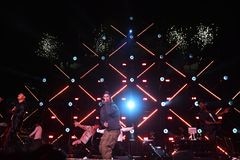