Noel Edison has resigned as artistic director of the Toronto Mendelssohn Choir, after an investigation into allegations of sexual misconduct.

The resignation follows the announcement on Friday that Mr. Edison had been terminated by The Elora Singers and The Elora Festival, where he also served as artistic director.

“While specifics of the situation cannot be disclosed for privacy reasons, the action underscores the mandate of all organizations to provide a safe workplace environment free from any form of harassment or other demeaning behaviour,” the Elora Festival and Elora Singers statement read.

In February, Mr. Edison was placed on a leave of absence and an independent workplace investigator was hired to look into “letters of complaint from third parties regarding Noel’s conduct,” according to a joint statement published by the Mendelssohn Choir and Elora Singers. The statement expressed “feelings of shock and sadness” about the allegations.

On Tuesday, the Mendelssohn Choir announced his resignation.

“The TMC thanks Noel for 21 years of artistic excellence with the TMC,” the statement read.

The organization also announced measures to deal with the sorts of issues that are coming to light with the #MeToo movement, with a “Creating a Safe Creative Space” initiative. It says it has begun a review of its anti-harassment policies and chorister guidelines; it will update policies and provide more education and training to staff and singers on the policies “and on the organization’s expectations about mutual respect; and ensuring that TMC’s process for addressing complaints is clearly understood.”

“I think they’ve done the right thing,” says Charles Davidson, a tenor who was formerly with the Toronto Mendelssohn Choir and the Elora Festival Singers. “But I find it rich that now they’re saying they will [put] these things ... in place, which they should have done in 2015.”

Mr. Davidson says he submitted a report in 2015 to the Elora board with complaints concerning Mr. Edison’s behaviour. After that, he says he was not asked back to the Mendelssohn Choir.

Mr. Davidson also participated in the investigation launched by the organizations this year.

“I’m happy, I’m relieved,” he told The Globe and Mail on Tuesday after the announcement of Mr. Edison’s resignation. “But I also think that the organization needs to be accountable in the same way that Soulpepper realized how much trouble they’re in. I think they’re trying to say all the right things now, but they let people down and they’re publicly funded and it’s been going on for too long.”

Efforts to reach Mr. Edison and the Mendelssohn Choir’s executive director, Cynthia Hawkins, were not immediately successful on Tuesday afternoon. Board chair Maureen Palmer directed The Globe to the organization’s statement and indicated she would not comment further. 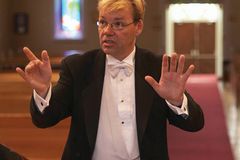