On her press bio, Sarah Harmer is described as a platinum-selling singer-songwriter and environmental activist. When it’s mentioned to her that the status puts her one up on someone such as David Suzuki, the Juno-winning artist laughs off the compliment. “I haven’t been nominated for Greatest Canadian,” she says. Fair enough, but the esteemed scientist Suzuki hasn’t the 49-year-old’s melodist gift for willowy folk rock and poignant, tuneful introspection. From her home outside Kingston, Harmer spoke to The Globe and Mail about hockey, the Tragically Hip’s Gord Downie and her first album in 10 years, Are You Gone.

If you knew you’d be asked over and over again about the big gap in your discography, would you have put out an album sooner?

I don’t think so. It was kind of hard to light a fire under me. I’m not sure if even the pain of the reoccurring question would have sped things up. As time went on, I was feeling more pressure. Just the self-inflicted voices in my head.

What were the voices saying?

They were asking, “Are you going to do this? Are you going to make the difficult creative decisions? Are you going to dive in, or are you just going to continue to walk away and do the easy stuff?” Part of the issue was committing to how I wanted the songs to sound. To get them in a shareable form, there’s a bunch of steps. In the end, I think the album came out when it was ready.

Twenty years ago you released the album You Were Here. That title makes me think of a time capsule that you might open in the future. Were you thinking that, back then?

I did need to listen to that record again. We issued my albums on vinyl for the first time recently. I can remember making that album really clearly. I wrote the song You Were Here about my friend Joe Chithalen, who was the first Weeping Tile bass player and a dear friend. He died while on tour with the Mahones, because of a peanut allergy. He was such a huge presence. He left a big flag in the ground.

Speaking of a lost presence, can we talk about your late friend Gord Downie?

The song What I Was to You, on the new album, it’s about him?

For the most part, yes. The first line was written for another friend of mine, Phil, who I played hockey with. He also died young from an illness. So, I had the melody and the first two lines for a long time before Gord was diagnosed. I ended up coming back to the song, and wrote the rest of it about Gord. It was while he was still alive, looking back to him being a big brother when I was at school.

There’s a verse about that, right? Where he tells you, “If they tell you this is the best time of your life, don’t let it get you down.” His wisdom comes through.

Yeah. It was great. He knew I had been playing in the Saddletramps in Toronto, in a band with guys five years older than me. And then, here I was going to frosh week at Queens. The whole goal of that week is to make you feel that you’re nothing. I thought, “What the …” So, Gord and his girlfriend at the time took me out for a drink and said what I wrote in the song, which was basically “Don’t worry, you’ll get through this. For some people this is the pinnacle of what they’ve experienced so far in life.” Gord knew that wasn’t the case with me. He told me to just just brave my way through it. It really stuck with me. I’m glad it made it into the song.

You mentioned hockey. Are you participating in this year’s Juno Cup?

Not this year. I believe I was the first woman to play in the Juno Cup. I’m not much of a hockey player, though I’m a good skater. A few years ago, I played pick-up games with some bartenders and musicians here in Kingston. And over on Wolfe Island, there’s a nice outdoor rink. I’ve played there for the Lake Ontario Cup, on the Waterkeeper team. But they accept anybody.

Jesse Ruddock, a goalie from Guelph, Ont. Her stage name is Koko Bonaparte. She got a scholarship to play at Harvard. People talk about [Blue Rodeo’s] Jim Cuddy and [the Rheostatics’s] Dave Bidini. But I would say she’s the best.

Bidini has gone on record as saying that Lawrence Gowan is the best hockey-playing musician. But I’m sure he’ll be glad you mentioned him.

I didn’t, really. I said other people have mentioned Dave. I never played with Lawrence Gowan. I didn’t know he was a hockey star. So, for me, it’s Koko Bonaparte.

Vivek Shraya prepares for theatre debut with her one-woman play How to Fail as a Popstar
Subscriber content
February 12, 2020 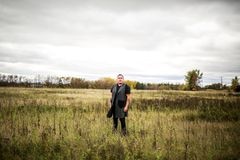