In his acceptance speech for the Indigenous album award at last year’s Junos in London, Ont., Jeremy Dutcher brought up the complexities of the award he had just won. “All of your work changes this place, and it deserves to be considered outside of this category," the composer-musicologist said, speaking to his fellow Indigenous musicians. "Our music is saying something.”

And Dutcher was saying something – until he was played offstage before he could finish his speech: Indigenous artists are marginalized by a category specifically dedicated to them – and they’d like to be more visible in other Juno categories as well. Dutcher got the bum’s rush in London, but the debate continues.

Here’s the nut of it: Pan-Indigenous music is no more a thing than LGBTQ music is a thing. Just look at the disparate Indigenous music winners of the past three years. Quantum Tangle (2017) mixes traditional Inuit throat singing and spoken-word storytelling with blues-leaning rock. Buffy Sainte-Marie (2018) is a folk singer. And Dutcher? His Wolastoqiyik Lintuwakonawa album was a reassembling of traditional First Nations music in a postclassical setting.

Dutcher was not alone in speaking out against the perceived siloing of Indigenous music. “They put us into one group," said Darren (Young D) Metz, one-half of the nominated hip-hop duo Snotty Nose Rez Kids. "So there’s four or five different genres put into one category, you know what I mean?”

The Canadian Academy of Recording Arts and Sciences (CARAS, the body that presents the Junos) got the message. What used to be called the Indigenous music album of the year is no longer. The oft-renamed award, to be presented in Saskatoon on Juno weekend (March 14-15), is now known as the Indigenous artist or group of the year. It’s a nuanced shift designed to focus on the musicians rather than the albums, which may have little in common stylistically.

While the renaming is well-intentioned, it is too late in coming. Call it this or call it that, but some are calling the award unnecessary.

At a Winnipeg music industry gathering presented by Manitoba Music in January, a workshop called “Indigenous is not a genre” included a panel discussion on Indigenous identity and labels within the marketing of music.

According to one of the speakers, Curtis Running Rabbit-Lefthand, the Indigenous category of the Junos may have outlived its original raison d’être, which was to provide exposure and recognition to Inuit, First Nations and Métis artists. “The award can still be effective in that sense, but Indigenous musicians feel their music is more than just that one word," said the 28-year-old founder and executive director of Indigenous Resilience in Music, which promotes community building among Indigenous musicians. "Our generation is challenging the music industry to represent us better. Our music deserves to be mentioned in other Juno categories.”

Indigenous musicians nominated in mainstream categories this year include iskwe (for adult alternative album) and Tanya Tagaq (for instrumental album). Neither were nominated in the Indigenous category. It is not known whether either bothered to put her name forward for consideration for the identity-based award.

Veteran rocker Tom Wilson is a Hamiltonian of Mohawk heritage nominated in the contemporary roots category for his album Mohawk, which is credited to his psych-folk project Lee Harvey Osmond. The Indigenous Juno debate is not a burning issue with him. "My job as an artist is to bring the Mohawk nation back into the light, and if an Indigenous award is going to help that along, that’s great,” Wilson said. “But we’re going to keep creating art and we’re going to keep expanding the group of people who recognize the art and understand what’s happening. That’s what’s going to make the difference, not necessarily an award of any kind.”

William Prince, a Winnipeg singer-songwriter who won the contemporary roots Juno in 2017, acknowledges the benefits of the Indigenous category: exposure for the winner and the nominated musicians. He worries, though, that the slotting can be limiting. “You put that title before an artist’s name and it could be doing a disservice," Prince said. "People think drumbeat pow wow stuff, solely for First Nations people to listen to.

“The title could be taking away from the validity of the art itself. That’s what some artists are feeling.”

It is technically true that the other categories are open to Indigenous and non-Indigenous musicians alike. But there is a big barrier in securing a nomination there: the math. While the Polaris Music Prize (won by Sainte-Marie, Tagaq and Dutcher) is based on artistic merit as determined by a jury, some Juno nominations are based at least partly on consumption and sales figures.

So securing a nomination (let alone winning) in the non-Indigenous categories is a high mountain to climb. Still, some Indigenous artists are up to the challenge. Calgary-based musician-activist Running Rabbit-Lefthand is a member of the hardcore punk band Signatory, which expects to put out an album this year. Asked whether he would put the band’s name forward in the Indigenous category, he is unequivocal: “Definitely not. Our music is hard rock. It’s not based on identity.”

At last year’s Junos, after Dutcher’s acceptance speech was cut short, he did get a chance to finish his thought later that evening when Max Kerman of Hamilton’s Arkells invited him to use his band’s own acceptance speech time after it won for rock album of the year. “He’s gonna go as long as he wants,” Kerman said of Dutcher. “Okay?”

It’s about sharing the microphone. 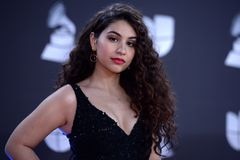 Jann Arden to be inducted into Canadian Music Hall of Fame at Juno Awards
January 14, 2020 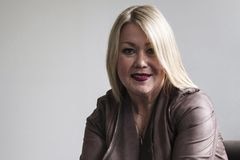 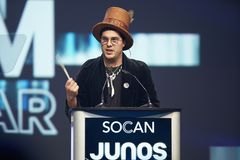