In 2017, musician Brendan McLeod of the Vancouver folk band the Fugitives watched his mother compete at the Canadian Masters Curling Championships in Guelph, Ont. At the banquet afterward, he spoke with an older woman. Doing the math, he determined that she had grown up in the 1940s and belonged to a generation that today is sometimes difficult for younger people to comprehend.

They lived with no technology, drank water directly from lakes and bought houses for five dollars, McLeod thought jokingly to himself. Going by news reels from the day, her generation and older lived in a black and white world, talking funny and walking in a Chaplinesque way.

“You think of them as not real,” McLeod, 40, says. “That they weren’t ever young people who had the same desires and dreams that you did.”

The next day, McLeod, a history buff who read Pierre Berton’s Vimy multiple times as a child, visited the nearby home of John McCrae, the author of the First World War poem In Flanders Fields. He read the lines about the fallen:

We are the Dead. Short days ago

Loved and were loved, and now we lie,

Reading the poem and speaking to the older woman at the curling reception it dawned on him that the young people from previous generations were no different than people today.

Inspired to make connections to the past, McLeod began working on a project that eventually became Ridge, a monologue with music that retells the Canadian military victory at Vimy Ridge in France in April, 1917. Ridge in turn inspired the Fugitives album, Trench Songs, a collection of First World War front-line soldiers' songs updated with new melodies and contemporary roots-music arrangements. It drops Nov. 10, one day before Remembrance Day, on the Toronto folk label Borealis Records.

When the premiere of Ridge this spring at Vancouver’s Chan Centre was postponed because of the COVID-19 pandemic, McLeod decided to reimagine Ridge as a film, shot by Mike Southworth in different spots at the centre with members of the Fugitives. Ridge, the film, screens at Vancouver’s Cinematheque on Saturday. It will be available online at the Chan Centre website starting Nov. 11.

The Battle of Vimy Ridge serves as a mythologized symbol of the birth of Canadian national pride and awareness. The poignant Trench Songs and the sobering Ridge provide context. Soldiers, often teenagers, are humanized and brought to 21st-century life.

In that sense, the project is similar to Peter Jackson’s 2018 documentary They Shall Not Grow Old, in which First World War footage is colourized and transformed with contemporary production technology. The film served as an inspiration for the Fugitives when it came to revitalizing old battlefield songs.

"The soldiers go from being in a history book to being boys, right in front of you,” says singer-guitarist Adrian Glynn. “That film stuck with us. What we’ve done with Trench Songs is to use modern melodies and instrumentation to make the songs relatable and less dated. In doing so, people will hear the lyrics anew.”

When choosing songs, the Fugitives (which also include banjoist Chris Suen and violinist Carly Frey) stayed clear of the propaganda tunes of the era.

“We tried to stick to songs we thought they were singing together as soldiers,” McLeod says. “They weren’t singing jingoistic songs in the trenches.”

Poring over old songbooks, Glynn and McLeod picked songs such as Take Me Back to Old Ontario and Donegal (A Lament From the Trenches). The ones that resonated were those that focused on the soldier experience. 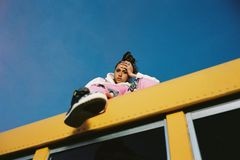 Nanaimo teen Liam Docherty is the red-haired hope of the blues
November 4, 2020