Some dragon. Some den.

The other day, the flamboyant financier Michael Wekerle spoke to media members at his El Mocambo money pit. Since purchasing the famed music venue in 2014, he’s blown through a fortune in its sleek, high-tech re-fitting. About $30-million, “give or take a million,” was the figure he gave when asked how much of his and his nervous investors’ money has been spent on the building’s overhaul. The question on everyone’s mind was how Wekerle, a former fire-breather on the CBC reality series Dragon’s Den, would make the cash back. “How much have you got,” he joked, when asked about prices to shows at the newly extravagant club, before allowing, “You’re not going to make a lot of money off ticket sales.”

Adorned in an eye-popping suit and a feather-affixed fedora, the 56-year-old dandy then shrugged and offered five words that explained everything and nothing at all: "It is what it is.”

What it is is a small venue, split between a ground-floor room (300 capacity) and a larger second-floor space (400 people, with a stage book-ended by the original El Mo palm tree sign, butterflied into two halves). What it isn’t is one more roadhouse. In a city where music venues were facing existential challenges even before large halls were shuttering to prevent the spread of the coronavirus, Wekerle, the former wild child of Bay Street, is now a rock-and-roll rainmaker.

Wekerle and his team had hopes of opening the El Mo on April 1. We all know what day that is. But, regardless of when he re-opens the club, Wekerle might be ahead of the curve. Before “self-isolation” and quarantines became part of the social lexicon, the idea of streaming content to stay-at-home fans was already part of the El Mo business plan. Now it might be part of the new world order for live music.

The El Mo is wired for sound and built for simulcasting – it’s basically a broadcast studio with a liquor license. Wekerle’s idea, in part, is to bring in legacy artists and A-list acts, charging fans up to $1,000 a ticket to see them play in the flesh while letting others watch the show on their smart TVs. Would Wekerle’s bold entrepreneurial pitch sway the Dragon’s Den money people, or is this just a vanity-project pipe dream?

On March 23, 1948, a a small display ad in The Globe and Mail hailed the opening of the “ultra-modern” El Mocambo Tavern, at 464 Spadina Ave. It’s been a long time since the Chinatown venue has been called modern – ultra or otherwise. The old El Mo’s dumpiness was part of its charm. When Wekerle took the padlock off the doors in 2014, he might have found full body skeletons, trapped upright on the sticky, beer-soaked floors like flash-heated Pompeiians.

Six years later, the venue is a gleaming marvel of bandwidth, sparkling bathrooms and VIP balconies. Originally the new El Mocambo was conceived as a live venue plus a recording studio designed by Eddie Kramer, the architect of New York’s Electric Lady Studios. Kramer is no longer associated with the El Mo refurbishing. The recording studio idea gave way to a venue-wide plug-and-play audio/video capability that will, it is hoped, lure big-name bands in to perform shows, with the option to stream them in real time or record live albums and DVDs.

Wekerle and his team (which includes general manager Andy Curran, former Coney-Hatch-singer-turned-Anthem-Records-artist and repertoire man) are banking on what concert business insiders call the “underplay.” This involves major artists performing in intimate rooms with capacities well under what the market would normally demand. Billie Eilish, for example, played L.A.'s 500-capacity Troubadour last year for a concert sponsored by SiriusXM and Pandora.

Although underplays tend to be promotional in nature, they can be lucrative. Ticket prices for Madonna’s Madame X Tour of theatres ranged from just over $50 to get in the door to $750 for orchestra seats, with VIP arrangements fetching as much as $2,000. A 16-date residency last year at the Howard Gilman Opera House in Brooklyn alone grossed nearly $10 million.

Of course, one of the most famous underplays in rock and roll history happened at the El Mocambo in 1977, when the Rolling Stones played the venue secretly under an assumed name, the Cockroaches. For their two performances – some of which are documented on the 1977 album Love You Live – Mick Jagger and company were paid scale, $400. Rock and roll is much more sophisticated now than it was in the first Trudeau era. The bidding for A-list acts today involves six figures at least, cash on the drumhead.

The walls of the new El Mo are awash with giant photographs of the Stones and other alumni (mostly Blondie). Wekerle floated the Stones as a “natural” to inaugurate the venue on April 1, while also mentioning Pearl Jam, Billy Idol, Motley Crue and the Who as targeted acts. He admitted bringing in bands of that stature is not only financially difficult but, because of contractual restrictions imposed on performers by tour promoters, logistically complicated.

“I’m trying to figure how to make that work,” Wekerle said. “There’ll be some challenges.”

Always, challenges. After the Stones played the grubby club in ’77, the venue’s status rose and bigger acts such as Elvis Costello and a nascent U2 replaced the blues and bar bands. “El Mocambo goes serious: fans lose out,” a Globe headline at the time asserted. And now the ultramodern, 21st-century El Mo reeks of exclusivity. Can’t afford the ticket, watch the show at home, such is money-man Wekerle’s dream. This isn’t your father’s El Mocambo, it’s your sugar daddy’s. 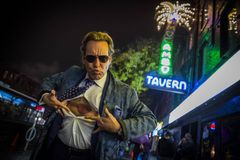 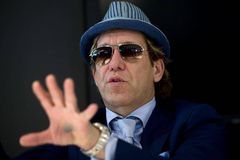