Most everybody recalls the 1963 single by the Crystals, Da Doo Ron Ron. Few, though, could name the song on the reverse of that phonograph 45, the obscure instrumental Git’ It. Every great success, after all, has its lesser flipside.

Phil Spector produced and co-wrote Da Doo Ron Ron, likewise Be My Baby by the Ronettes and You’ve Lost That Lovin’ Feelin’ by the Righteous Brothers. He produced some of the greatest pop recordings of the 20th century, working with Stevie Wonder, the Beach Boys and many others. He was also an abusive husband, a gun-obsessed substance abuser and a convicted murderer.

He died on Saturday, at age 81, behind bars for shooting actress Lana Clarkson in 2003 at his castle-styled mansion. Call him a pop-music genius, describe him as insane or label him a long-time inmate at the California Health Care Facility in Stockton – just try to do it in a pithy life-encompassing headline or in a social media blurb of 280 characters or less.

Such was the struggle in the hours after his death was announced on Sunday – the task of encapsulating an awful human being who happened to have made great art. Wrestling with a twisted legacy, some did a better job of summing up Spector than others.

A BBC headline had Spector as a “talented but flawed producer.” Whether Spector was deemed flawed for his heavy-handed contributions to George Harrison’s All Things Must Pass or for shooting a woman to death is unclear.

Rolling Stone, in its initial report, said the legacy of the “wall of sound” architect was “marred by a murder conviction.” Isn’t “marred” a little light? It’s one thing to argue that his counterintuitive production elements on Leonard Cohen’s Death of a Ladies’ Man album “marred” Spector’s reputation. The murder rap, though, was more deathblow than blemish.

Spector, who produced River Deep – Mountain High by Ike and Tina Turner, knew something about unrepentant music men with “marred” legacies. Delivering a eulogy at Ike’s funeral, he criticized Tina’s autobiography – which alleged spousal abuse – as a “badly written” book that “demonized and vilified Ike.”

Social media reaction to Spector’s death by natural causes attempted to re-prioritize the elements of his complicated legacy, with some paying special attention to his maligned embellishments to the Beatles album Let it Be while making no mention of his acclaimed early-career work.

CNN anchor Jake Tapper simply posted a photo of Spector’s human casualty. “This is Lana Jean Clarkson, the actress Phil Spector murdered,” he tweeted. “That is literally all I have to say about Spector and his ‘legacy.’”

A more nuanced response came from Andy Kim, a Canadian musician who knew Spector and who had a hit in 1969 with his version of the Ronettes’ Baby, I Love You, co-written by Spector.

“Phil Spector was a Genuine Genius,” Kim tweeted. “His sound changed my world and begged me to dream of a life that would never have existed for me.”

Referencing Spector’s dark side and how people are often remembered, Kim quoted Shakespeare’s Julius Caesar: “The evil that men do lives after them / The good is oft interred with their bones.”

It should be noted that Spector, at least late in life, considered himself to be mentally ill. “I have devils inside that fight me,” he told journalist Mick Brown after the Clarkson shooting but before the conviction.

A report of Spector’s death by National Public Radio mentioned his “insanity and insecurity,” while including a statement from Clarkson’s mother, “Her energy, brightness and love of life have sustained her family since her murder 18 years ago in 2003,” said Donna Clarkson.

The NPR report also revived a quote from a 2001 radio interview with session drummer Hal Blaine, who said that “Every Phil Spector session was a party.”

Spector’s former wife, Ronettes namesake singer Ronnie, might disagree with Blaine’s upbeat memory. In an evenhanded Rolling Stone obituary, she is quoted as saying her husband “took singing away from me” by keeping her a virtual prisoner in his mansion. “For seven years, I didn’t go anywhere,” she told the magazine in 2016.

On Sunday, the singer tweeted that her spouse from 1968 to 74 was a “brilliant producer, but a lousy husband.” She is, of course, entitled to her adjectives.

She closed her social media epitaph by declaring that “the music is forever...” So too was Spector’s life sentence – murderer forever. 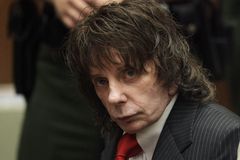