The woman sitting quietly in a corner of her palatial Florida home is using a breast pump to store her milk for her twin babies. There's little dignity to the time-intensive routine. And even cracking jokes while using the uncomfortable device for the task doesn't help. She looks exhausted, like scores of other new mothers who have come before her.

With a difference: The mother in question is singer Celine Dion – and she's pumping for a television audience as well as her boys Eddy and Nelson. "There's not only food in there," she says to the camera, "there's love."

Called Celine: 3 Boys and a New Show, Dion's upcoming documentary special on Oprah Winfrey's OWN network is full of gushy, maternal musings. But while they might seem corny, the megastar – who in the past has often seemed to resort to greeting-card clichés in speaking to the press – is clearly not acting. She's mad for her new babies, as well as her 10-year-old boy René-Charles. Not to mention her long-time husband and manager René Angélil, a man who fiercely protects his wife's image as a crowd-pleaser with Titanic-sized pipes and has established her as one of the world's richest women (with a personal wealth estimated at more than $1-billion).

Still, it's a little unusual for the notoriously private artist, now 43, to invite a camera crew (even her pal Oprah's camera crew) into her all-white, $20-million oceanside Florida home, where they follow her every move, from nursery to kitchen to walk-in closet, and join in everything from the kids' baptism to rehearsals as mom Dion prepares – with just five months of prep time – to return to Caesars Palace for her Las Vegas one-woman live show, seen so far by more than 3.25 million adoring fans.

Some may adore her a little too much, of course – there was the fan, for example, who recently entered her Montreal home and had helped himself to pastry from Dion's fridge and started to run a warm bath before he was caught by police. But there are also folks who don't love her. Over the years, the singer has polarized listeners, sometimes inspiring a zealous dislike that's a bit bewildering, given the long-necked, lithesome star's track record. The five-time Grammy winner has sold more than 220 million records and never made a huge misstep. (Okay, her marriage-vow renewal in 2000 – with the camels, exotic birds and six Berber tents, each representing a scene from A Thousand and One Nights – was a little over the top.)

Regardless of her public image, since the birth of her son, René-Charles, and her 69-year-old husband's cancer scare 10 years ago, Dion has largely left the limelight. She performs primarily at The Colosseum theatre at Caesars Palace in extended runs that last for years, so she can move her entire family to Vegas to live near her rather than drag them around the world on tours.

"I see this time as the greatest gift of all," said Dion last week, talking from a limo on Angélil's cellphone on the way to a concert in Central Park with Andrea Bocelli, David Foster and Tony Bennett (her sister's with Dion's children in a second limo behind them – you try doing phone interviews with three kids in the car). "This [motherhood]is the most extraordinary gift that life can give us. I'm trying to cherish every second."

In her 90-minute TV special, Dion certainly seems to let her guard down more than she ever has: We hear about her determination to conceive (she went through six rounds of in-vitro fertilization for the twins), and see her fretting that her breast milk might leak through the front of her gown while onstage, helping René-Charles with homework in her sweatpants and insisting that she – not a night nurse – will wake up every two hours to feed her hungry babies.

Or maybe the ramped-up candour is just more savvy promotion for Dion. Her next season in Vegas starts in December – and injecting that little bit of juice to keep the sellouts coming can't hurt.

Whatever her intentions, though, it's evident that Dion the workhorse has mellowed somewhat and rejigged her priorities so that kids and husband come first. She even looks softer – the sharp angles of her face more gently rounded and less pinched.

In Dion's words, the TV special is a way for her fans "to get to know me better. I wanted to give them a VIP pass to my life. I wanted them to see what it's like to travel with us. To understand a little bit more what it is to prepare a show, and to have two new babies. So many things have happened since I was last in Vegas." (Among her projects: two new albums coming next spring, one in French and one in English, incorporating some of the songs from her Vegas show.)

The TV special is also meant to show fans Dion is just like them. "I wanted to re-connect with them and show them that I also take my kids to school," she says. "We have an extraordinary life, I know that, but are we that different from everyone else? No, we're not."

Well, maybe a little. Dion's 10,000-square-foot Jupiter Island, Fla., home has a lavish, five-acre garden, two swimming pools, two water slides and a river. To get to work, the singer flies by private jet to Las Vegas, and for her workwear, couturiers are flown in from Europe.

But keeping her kids grounded, something Dion says she's determined to do, amounts to the same challenge no matter what your circumstances are. "When you have nothing, it's difficult to raise a child. When you have everything, it's hard to raise a child," she says matter-of-factly. "But it's not what you give them that's important. It's what you teach them – that is the line I remember when I make all decisions."

That Dion is a hard-driving perfectionist, in all aspects of her life, is no secret. As the youngest of 14 kids born to lower-middle-class parents in Charlemagne, Que., she grew up having to fight for everything she had. She first met her husband – 26 years older than her – when she was 12 and he mortgaged his house to jump-start her career. They've been married for the last 16 years. And, as the artist readily admits, that's a real commitment.

"It's tough to live with me. I'm not easy. I'm intense in everything I do. I honestly don't know how my husband does it," says Dion, her French-Canadian accent becoming more pronounced as she gets more animated. "He copes with me, and deals with managing everything in my life outside of our home, so I can focus mainly on my most important job as a mom, and serving the music as best I can. I rely on him a lot."

So is this new Dion an Everywoman, just trying to find that delicate balance between work and motherhood? No. But Celine: 3 Boys and a New Show (and that scene with her wielding a breast pump like a pro) does make it easier to relate to Celine the celebrity.

So much so that when she signs off by extolling her family's virtues – "They taught me how to be the best I can be, and they make me feel loved and supported. They're why I'm here today" – well, you can't help believing her.

Fall music: Everything old is new again (and they bet you'll buy it)
September 24, 2011 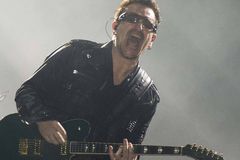 From Coldplay to Feist, the biggest albums of the fall
September 24, 2011
Fall concert preview: Lyrical tricks and tuneful treats
September 26, 2011
Follow us on Twitter @globearts Opens in a new window
Report an error Editorial code of conduct
Due to technical reasons, we have temporarily removed commenting from our articles. We hope to have this fixed soon. Thank you for your patience. If you are looking to give feedback on our new site, please send it along to feedback@globeandmail.com. If you want to write a letter to the editor, please forward to letters@globeandmail.com.
Comments