Taylor Swift digs Afie Jurvanen, but the cool kids do not. Not that the man who sings that he can't be everything to everyone on his new album gives a flip about it anyhow. "If I can never be the next greatest thing, that would be fine with me," says the Toronto-based musician who works professionally as Bahamas. "I'd be happy with that."

Jurvanen, a gifted guitarist and cool-breeze melodist who released his fourth album (Earthtones) this week, is a stealthy kind of Canadian success story. Because he gets little coverage from hip taste-making blogs Pitchfork, Stereogum and Brooklyn Vegan, his accomplishments go relatively unnoticed. But he racks up millions of views on YouTube, his shows here routinely sell out (often on the day tickets go on sale) and his single Way With Words recently showed up on Swift's Apple Music playlist. (Swift's 19 selections included songs from Drew Barrymore, Keith Urban and, to no one's suprise, four cuts of her own.)

Mention those numbers to Jurvanen as we chat in his dining room and he shrugs. "We seem to have a lot of control over how we put our music out and where we play," says the tea-sipping former Feist guitarist, whose current Canadian tour ends with a free skating event at Toronto's Harbourfront Centre on Jan. 20. "And right now, I'm sitting in my house with my family and friends and talking to you. This is right where I want to be."

His cozy house, which he shares with his wife and two very young daughters, is located in an off-the-beaten-path, quasi-industrial area in west Toronto. The cab driver who brought me here got lost on the way, even with GPS. Jurvanen is tough to find – hiding in plain sight – and yet, when one zeroes in on him and his minimalist, stylish soft rock, there is an urge to stay with him, as his loyal audience has steadfastly done.

There is no attitude to the laid-back 36-year-old native of Barrie, Ont., and wry self-deprecation is part of his genuine charm. "I think what people respond to is Afie's sense of humour and the line he walks delicately between humility and ambition," backing singer Felicity Williams says. "I think there is also love between all of us in the band, which comes through in how we play, and in which the audience participates."

What Bahamas fans get, some of the more trendier influencer blogs do not. Perhaps that will change with Earthtones, which features, on a few tracks, one of the more badass rhythm sections alive: bassist Pino Palladino and the legendary R&B drummer James Gadson. (How did you get those guys – D'Angelo's rhythm section – to work with you? Jurvanen is asked. "You e-mail them," he deadpans.)

In addition to the sick grooves, Earthtones (released on surfboard-pop dude Jack Johnson's Brushfire Records) features Jurvanen's tasteful guitar licks and lyricism that is heartfelt in the wittiest of ways, along with the exceptionally arranged accompanying vocals of Williams, a soft-voiced "shooby dooby" singing revelation.

It's all rather sublime and delightfully clever. And if his music is mellow and accessible, Jurvanen's subtleties make him stand out – just not to everyone, apparently.

"His goal isn't to be cool," explains Jurvanen's manager, co-producer, recording engineer and long-time friend Robbie Lackritz. "He runs away from artifice. He wants the person on stage to be the same guy you'd have a beer with. I think that's appealing to people, but I also don't think that's what tastemakers are looking for."

What Lackritz is talking about is image. And not just Jurvanen's image, but the one the Pitchforks of the world are cultivating for themselves. They seek the mysterious or cutting-edge artists to write about, thus creating their own reputation and credibility by aligning themselves with those artists. And once an artist is judged to be outside that curatorial zone, they never will get in.

"They want something that's never been heard before," says Lackritz, who is also Feist's manager. "I think if an artist is being honest and if they're being vulnerable like Afie, then there's a lot less chance they'll fall under that umbrella."

Jurvanen's vulnerability is evident in Earthtones. On Opening Act (The Shooby Dooby Song) he wonders, "Is my music not good enough?" Elsewhere, he references writer's block and depression. But, in the end, in most every song, he emerges on top. "I can do no wrong," is one quietly confident chorus, a refrain with which his fans can agree.

As for his under-the-radar status, Jurvanen isn't so concerned with his place in any pecking orders. "I admire artists who are able to have a career outside of the media world, frankly," he says, referencing popular acts he's toured with, Jack Johnson and Toronto's City and Colour. "There's a passion to their fans. It adds up, and after a number of years you realize you've built something substantial."

So, he's not the coolest. Stereogum might not know how to spell his name and Brooklyn Vegan thinks Bahamas is just a coral-based archipelago. Know this, though: In his shooby-dooby world, Jurvanen, unassumingly and absolutely, rules. 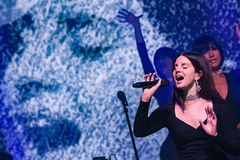 Cranberries lead singer Dolores O’Riordan dies suddenly at 46
January 15, 2018
Bon Jovi, Nina Simone among Rock & Roll Hall of Fame inductees
Subscriber content
December 13, 2017
Follow Brad Wheeler on Twitter @BWheelerglobe
Report an error Editorial code of conduct
Due to technical reasons, we have temporarily removed commenting from our articles. We hope to have this fixed soon. Thank you for your patience. If you are looking to give feedback on our new site, please send it along to feedback@globeandmail.com. If you want to write a letter to the editor, please forward to letters@globeandmail.com.
Comments are closed