The voice is dark and fluid, with a lightness on top and a grittiness lower down that makes you think that Charlotte Cardin has packed a lot of living into her 22 years. Her lyrics sound that way too, though there's also a hint of imagined experience, of a teenager thinking her way into situations she may be too shy to have tested out for real.

The Montreal singer-songwriter recently began living what must have been a dream for her not long ago: She signed an international deal with Atlantic Records, and now has a much wider stage for her talents. Known in Quebec initially through her performances on the televised singing contest La Voix in 2013, Cardin is quickly moving towards a bigger horizon.

"It's very exciting to play for new crowds, who don't necessarily know me yet," she said, in an interview at the Montreal offices of Cult Nation, the label that will continue to represent her in Canada. In person, she seems younger and sunnier than the persona presented in her songs, which often brood over lost opportunities and the pain of missed connections.

Her slow-grinding single Dirty Dirty, which came out last year and has had nearly four million plays on YouTube, is about feeling lust for an inaccessible person, to whom the lyrics speak directly. Main Girl, which Cardin previewed in a recent Billboard Live session and released on an EP earlier this month, takes an almost masochistic view of being the more committed, more vulnerable half of a unsettled relationship.

Dirty Dirty in particular has an Amy Winehouse feeling to it, both in the groove and the grainy heft of Cardin's voice. It's a comparison she courted somewhat on La Voix, where she covered Winehouse's You Know I'm No Good. Some people still make the link when they first hear her voice.

"I don't mind, because I love her music," Cardin said. "I'm just doing my stuff. I'd rather sound like her than some other people."

Her first love in music, however, was Celine Dion. It was usually Dion's songs she sang when her older sister, Camille, pushed her to perform for Camille's friends.

"She was a teenager and I was about eight years old, and she'd say to them, 'She has such a beautiful voice, listen!' And I was super shy, but I'd sing for them because my big sister wanted me to. That was sort of my first introduction to doing shows."

Cardin still has a Celine obsession, "and it has evolved, though I guess I still do look at her with six-year-old eyes," she said. But it was a song by Radiohead – No Surprises – that made her begin to think that she could write her own songs. "I really loved how complex, yet how easy to listen to, their music was."

Cardin studied voice for nine years with a conservatory-style teacher, though seldom sang anything classical. She brought Dion's music to recitals, listened to pop and jazz and rock at home and eventually began singing her own songs for her friends.

She writes alone, music and lyrics in both English and French, and still sends her unpolished drafts to her sister, and to her manager and producer, Jason Brando. "I know they're going to challenge me, and tell the truth," she said.

La Voix was useful, she said, because it pushed her into a much bigger arena, and forced her to adapt quickly. Five years as a teen model also taught her how to be comfortable in front of a camera, though she never thought of it as more than "a student job that I didn't have to do five days a week." She had a four-month run of modelling internationally, and it left a few marks on her psyche.

"Everyone is judging you by what you look like, nothing else," she said. "They talk to you like you're an animal." She was glad her parents travelled with her to modelling jobs.

Cardin had a full-length album nearly ready to go when the deal with Atlantic came through. Now, the album has been pushed back as her new label introduces her abroad with a version of the EP she put out last year.

The best part, for her, is the wider range of live exposure that the Atlantic connection has brought, including the Billboard Live session, which has been seen by nearly 200,000 people. A fall tour with Australian singer-songwriter Nick Murphy will introduce her to new audiences throughout the United States, as well as in Toronto and Vancouver. The big curtain is going up, and Cardin is ready for it.

Charlotte Cardin plays Mtelus in Montreal on Sept. 22 and 23; the Danforth Music Hall in Toronto on Sept. 25 and 26 and Vancouver's Vogue Theatre on Oct. 9 and 10.

Aussie phenom Tash Sultana is making her mark on the music world
September 20, 2017 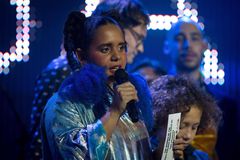