Upstairs at the Rivoli club, on the band's old Queen Street West strip, Jim Cuddy and Greg Keelor are speaking about the classic Blue Rodeo album 5 Days in July, released two decades ago, almost to the day. "How many years ago did you say?" asks Keelor, his hearing far from perfect any more. "Twenty," answers Cuddy. "That's all?" Keelor says, surprised. "I feel young."

He doesn't look young, all white hair in the head and face like Ronnie Hawkins in a snow storm. Five Days in July was recorded at Keelor's farm, as was In Our Nature, the band's warm, contenting new disc that could be called Five Days in October for its more autumnal air. When Keelor is asked about the condition of his homey farm house, he takes half-joked offence. "What do you mean by that, the condition?"

I had meant nothing, just wanting him to compare the house now – I had visited it during the making of In Our Nature – as opposed to 20 years ago. "Oh," Keelor says. "Well, I would say that it's in much better shape now. Back then, and especially in the decade that followed, I was a little bit of an absentee landlord on my own property. It got a little worn down."

A little worn down. Not taking care of things. "Can we extend that to apply to other areas of your life, at that time?" I ask. "Oh, Jesus," Keelor exhales, surprised that the interview is going down this road. Cuddy, sitting across the table, grins mischievously. "This is awesome," he says, watching his friend and bandmate squirm. "This is fantastic. I'm just going to sit back and listen to this."

Keelor shakes his head, but continues. "I let a lot of things go back then. When you've been doing this as long as we have, there are a couple of lost years here and there. You look back – what happened?"

Cuddy keeps smiling. The long-running routine of the gifted songwriting frontmen of one of Canada's most beloved musical acts still has the capacity to charm. Keelor, rough-cut, wounded and soulful. Cuddy, smoother and sweeter in voice and look, but subtly wicked at times. Even during an interview they play off of each other, after all this time.

It is in their nature.

The making of the acoustic-based Five Days in July came after a particularly loud tour by the band, in support of 1992's Lost Together. "We're probably seeing the result of that now," Cuddy says, recalling concerts that left ears ringing and probably figured in Keelor's current hearing problems. "Recording Five Days in July at the farm was in many ways a break from the fatigue of our volume."

Years later, Keelor's hearing issues were plaguing Blue Rodeo's live performances. The concerts were marked by a limited role from the singer-guitarist, who would sit in for an acoustic mini-set with Cuddy. "The band didn't like it, I didn't like it and I don't think the people liked it," says Keelor. "Oh, they liked it," quips Cuddy.

To remedy the situation, Cuddy suggested changing the stage set-up and using in-ear monitors. It took a while for the band to get used to it. "When you take away people's ability to hear each other in the air, they start to get really cautious," says Cuddy, recalling a particularly unpleasant concert in Fort McMurray, Alta., in 2012. "It was laconic – awful."

Eventually the band became comfortable with the new arrangement, and was in fine trim heading to Keelor's farm to record In Our Nature. "The band adapting to my ears since the last tour has really changed us," says Keelor. "And when you look at the story of Blue Rodeo, there are impediments and things that rose up. But we always seem to survive. We always seem to find a way to keep going."

In Our Nature is a comfortable listen, from the George Harrison-styled Never Too Late to the shuffling honky-tonk of Tell Me Again, and from Cuddy's bittersweet take on perseverance (When the Truth Comes Out) – "through it all, rise and fall, I know just why I'm here" – to Keelor's Paradise, with the lilt of Seger's Against the Wind and lines about paying the price for temporary euphoria.

On the hazy, rainy title track, Keelor softly sings the last line, "It's in our nature to say goodbye." Asked about that, he shrugs. "We're not at the beginning of our career."

Cuddy then picks up the story. He had heard that Keelor had told a journalist that In Our Nature would be the band's swan song. "So I asked Greg if he thought this would be our last record. He said, 'No, no, no – this is just the last good one we'll make.'"

And across the table, Keelor smiled. 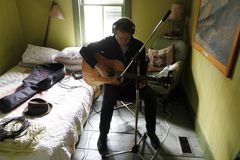 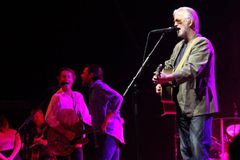